Nothing says low-stakes rollout like launching a tour on a Tuesday night in Cincinnati, when and where the lights aren’t necessarily the brightest.

But, as it turns out, New Kids on the Block did not need a practice run in a smaller market. Save the inconsequential opening-night hiccup, the New Kids’ “Mixtape Tour 2022” looked and sounded ready for the Staples Center in Los Angeles, which it will hit later this month, as well as the 50-plus other rooms where it is scheduled to stop this summer (get tickets here).

Along for the ride with the Boston boy band on the turn-back-the-clock-styled package tour are Salt-N-Pepa, Rick Astley and En Vogue. The run of the show was not in a typical hierarchical order, where the smallest act goes first and the headliner last. Instead, it was NKOTB who kicked it off, and the supporting cast weaved in and out of the New Kids’ set in what was a start-to-finish two-and-a-half-hour performance — so, about two mixtapes long.

It came off like a variety show, with acts coming, going, and coming back again on the main stage and a smaller one at the opposite end of the floor of the arena.

Heritage Bank Center was not at capacity, though a blindfolded visitor would not have known. The crowd, which wholly fired up whenever it was the New Kids’ turn, started loud and stayed loud. Donnie Wahlberg was the most effective provocateur among the quintet.

Singing lead on “Cover Girl,” one of the performances in the early part of the set, Wahlberg paused to address the crowd. “Cincinnati, we ain’t wasting no time tonight,” he began. “Don’t you know I love you, Cincinnati? I think I’d rather call you Cincinnasty.” 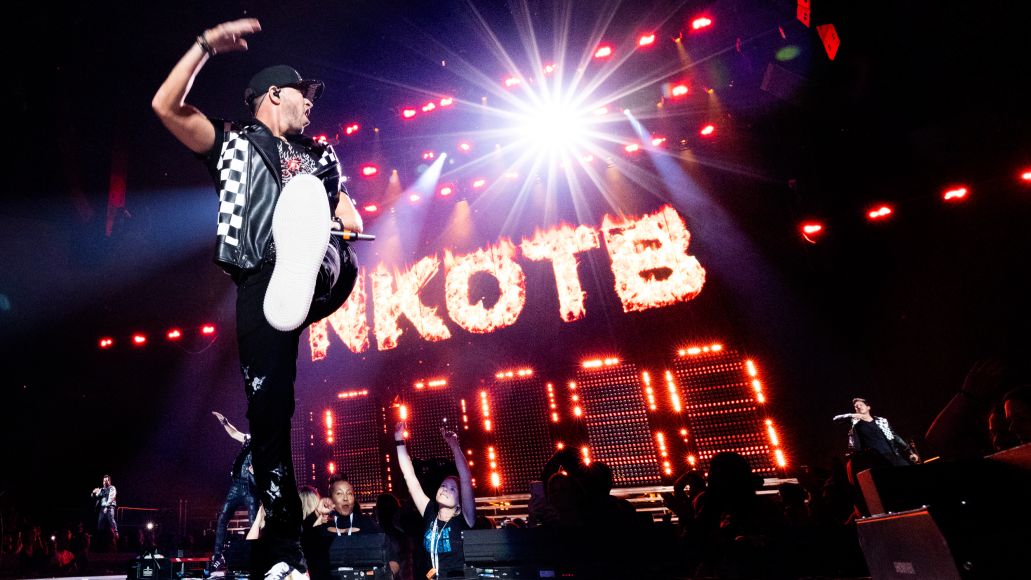 New Kids on the Block, photo by Marcello Ambriz

If his words didn’t work — and they didn’t not work — he then went to the abs, lifting his shirt to varying heights, sometimes revealing a bit of stomach, other times completely removing it. Like a musician playing an instrument (and, as far as that’s concerned, all of the backing music coming out of the PA was on pre-recorded tracks), Wahlberg played his shirt.