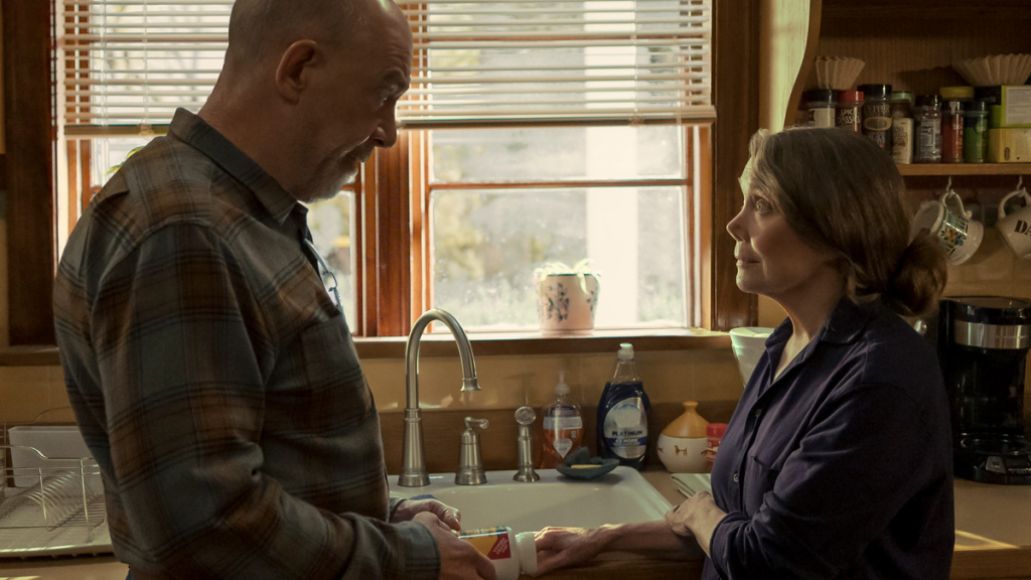 The first two questions aren’t so heavy: as irregular flashbacks to their younger days demonstrate, the Yorks (played in sepia by Lowrey Brown and Lily Cardone) have always been fine as a universe of two, and Byron, really, they can just ignore (even if we in the genre-savvy audience can see his inherent Too Muchness as the Chekhov’s gun it’s likely to be).

The question of their continued independence, though, that’s anything but light. With Frank’s memory slipping in increasingly significant ways and Irene still recovering, both physically and emotionally, from what her doctor repeatedly reminds her wasn’t all that major a fall more than a year back, the answer as to how much longer they can keep just leaning on one other seems, pretty clearly, to be not much longer at all.

Never mind that this is a fate that awaits every human being, partnered or not — that’s a really tough fact to have to acknowledge! Similarly universal (and just as hard to acknowledge the bitterness of)? Growing up.

Specifically, growing up just enough to realize that your parents aren’t necessarily who you thought they were when you were a kid — see: Jude and Toni, in different ways — and then growing up even further and having to come to terms with the fact that the life you’ve ended up in isn’t the life you would (or possibly should) have chosen for yourself — see: Denise, Byron, Stella, and Chandra, a former student of Irene’s played by Beth Lacke whose minor social position in the town of Farnsworth ends up having major repercussions on the Yorks’ story by season’s end.

This, really, is where Night Sky — or at least, its cast — shines, using as they do the series’ space chamber-cum-mystery box conceit as an opportunity to explore the impossible geometry of the human condition.

Spacek and Simmons, as the series’ co-leads, are, it will not surprise you to read, at the top of their game here, with Simmons rooting Frank’s suspicious grumpiness in a dark well of love wrapped up in fear, and Spacek imbuing Irene with a kind of open-hearted selfishness that’s equal parts bitter and sweet.

As complex and nuanced as their performances are, though, they’re very nearly matched by those of both their domestic foils — McKirnan’s Denise and Bartley’s Byron each vibrating, if on wildly different frequencies, with existential despair — and the younger, mostly international actors leading the season’s other main arcs.

Between Hansen’s Jude exuding earnest innocence in Farnsworth, Zylberberg’s Stella running on fumes and flinty desperation in Argentina, and Hernández’s Toni just incandescent as the audience’s clearest avatar throughout, never not pointing out how every adult’s obsession with keeping secrets is likely to get everyone killed, the casting is (pardon the pun) out of this world. Genuinely, whatever else might go on in Night Sky this season, watching these actors make a meal of the character studies they’ve been handed is worth the price of admission.

When is a Mystery Not a Mystery? Well, apparently when it’s a character study. Because here’s the thing: as moving as the emotional work that the Yorks et al do over the course of this season’s eight long episodes is, the mystery half of the story goes… nowhere.

And not “nowhere” as in, wow, what a disappointing answer to a cool set-up! “Nowhere” as in Miller and his writing team were apparently so preoccupied with keeping Night Sky’s mysterious planet cards close to their chest that, even with eight long episodes to play with, not one meaningful piece of mystery-related information is shared with the audience.

Emotional insight, sure — we get plenty of that. But the kind of mythology-building details that a future Fandom.com Night Sky wiki might be filled with? Nada.

Now, if the Yorks’ subterranean chamber were meant to be a metaphor about the “great unknown” of being human, that would be one thing. After all, one of the few mysteries the season does build its way up to unraveling in explicit detail — and please, take this as the official content warning the series itself never actually gives — is the central role that both depression and suicide have played in the York family’s lives.

Were the unraveling of that family mystery to eventually reveal that both the Yorks’ subterranean star chamber and the mysterious Jude were just figments of their grieving imaginations, the lack of more space-y answers might be understandable. A rotten trick, considering the sci-fi audience the series’ marketing is so clearly trying to attract, but at least understandable. 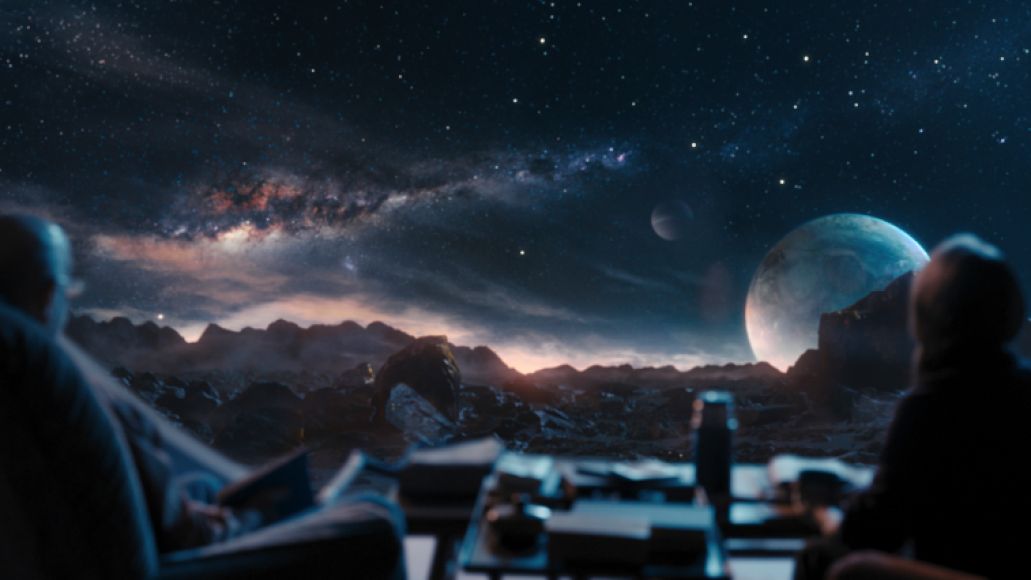 The thing is, the Yorks’ elevator to the stars — like Jude, himself — is very real. Moreover, it’s powered by a kind of advanced navigation system that someone clearly had a blast designing. Possibly the same person who went to town on the glowing, pill-like trackers that follow various characters around, or the orb from the trailer, or the hammered metal bar and geometric gold coins that Jude is carrying in a leather pouch when he shows up in the Yorks’ lives. Someone else had a similarly good time designing the glyph language that’s etched into the chamber’s walls, and the haunting song from Jude sings at karaoke, and the [redacted] that shows up in the finale’s final shot.

And yet, we, in the audience, are given precisely zero information about any of it. That hand-wavey list of mythological artifacts outlined above? That’s not a critic hedging to keep a review free of spoilers. That’s a critic saying, there are no spoilers to give. The existence of each of those artifacts is, for the most part, the extent of the knowledge Season 1 of Night Sky is prepared to leave its audience with.

Now, perhaps acknowledging the absence of spoilers could be considered, itself, a spoiler. But honestly, that would be giving the mystery-box half of Night Sky way too much credit. Because as little information as the audience is ultimately given about the (presumably cool!) mystery pulsing in its subterranean core, the show sure acts like it’s laid a compelling trail.

Spoiler: it has not.

The Verdict: In terms of the character work that is ultimately the heart of this project, Night Sky is a winner. Simmons and Spacek are magnetic to watch, both together and apart; Hansen makes a solid case for himself as Australia’s next breakout star; and Zylberberg and Hernández turn in a mother-daughter relationship so lived in, it’s hard to believe they aren’t really family. The cinematography (especially in Argentina) is lovely, the costuming is sharp, and the soundtrack is surprising in the best way. Effective sci-fi mystery or not, as a sharp-edged family drama, Night Sky is a compelling watch.

That said, the series presents itself as a sci-fi mystery. Literally, one of the promoted Twitter posts this critic was served in the middle of writing this review read, in no uncertain terms, “Uncover the secrets that reside in Franklin and Irene’s backyard.” And friends, if that’s the promise Night Sky wants to make to its potential viewers, it’s our responsibility to append the warning that it’s not one the series is at all prepared to keep.

Where to Watch: All eight episodes of Night Sky premiere Friday, May 20th on Amazon Prime Video.

*To save you the search: no, Farnsworth, Illinois isn’t real. That said, there is an architecturally notable mid-century modern house in Plano, Illinois called The Farnsworth House that was designed and built by architect Ludwig Mies van der Rohe for a fascinating woman named Edith Farnsworth.

Its glass-walled, steel-edged openness is hardly reflected in the subterranean domesticism of Night Sky, but, at a stretch, Mies’ stated desire to use architecture “to bring nature, houses, and the human being to a higher unity” could arguably be reflected in the glass-walled den overlooking the desolate alien landscape that Irene and Frank have spent the last twenty years watching.