“I’m not gonna talk this much at other shows, but this feels like home, and I missed ya,” Eddie Vedder told the San Diego crowd on Tuesday night.

The first time I saw Pearl Jam, it was December 1991 and they were the relatively unknown openers for Nirvana and Red Hot Chili Peppers. My friend had bought a Pearl Jam shirt before the concert (even though the “cool” thing was to get Nirvana merch), when suddenly a long-haired Vedder ran up from somewhere and thanked her.

More than 30 years later, Vedder is still filled with this kind of enthusiastic gratitude. He showed plenty of tokens of it throughout Pearl Jam’s nearly three-hour set at Viejas Arena in the city he said “feels like home,” the place where he lived before moving to Seattle.

This was the first stop in Pearl Jam’s relaunched tour to support Gigaton, a tour that was postponed for 25 months because of the coronavirus (get tickets here). The band was so happy to be back on stage that they practically had to be kicked off the stage at the sold-out venue when the house lights went up during their final song (“Alive”) — just after 11:30 p.m.

Vedder started showing his graciousness and excitement early in the evening, as most people were still parking or at the craft beer tens. The frontman walked onto the stage to greet the fans already inside, treating them to an acoustic version of Warren Zevon’s “Keep Me in Your Heart.”

About an hour later — after a charmingly disheveled solo set from former Chili Peppers guitarist Josh Klinghoffer’s Pluralone project  — Vedder returned to the stage with the rest of Pearl Jam: Mike McCready, Jeff Ament, Stone Gossard, and Matt Cameron. Klinghoffer also joined the band, as he’s doubling as a touring multi-instrumentalist on this trek. The stage, while massive, was sparse with the exception of a giant arc of lights that changed colors to fit the mood of each song. 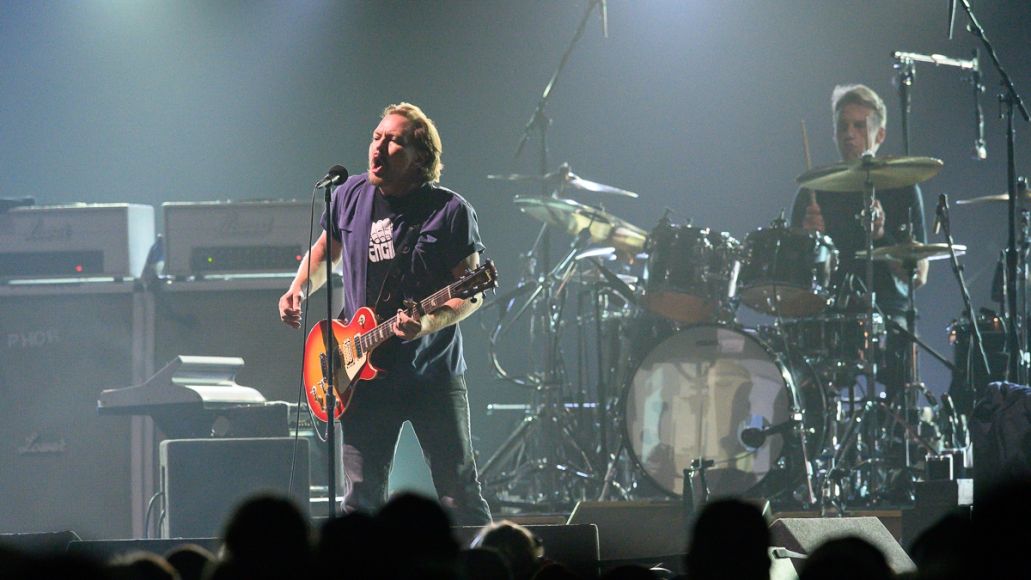 They performed a 23-song setlist, the selection of which Vedder said was influenced by San Diego and the ocean. In front of an audience that ranged from very young kids wearing giant headphones to silver haired rock fans, the band opened with Ten classic “Oceans.” The band ripped straight through “Retrograde” and “Never Destination” with the kind of focus and drive you’d expect to see in a small club, not at a 12,000-seat arena.