Radiohead could’ve proudly followed 1995’s The Bends with something markedly similar. After all, that sophomore collection surpassed predecessor Pablo Honey in nearly every way, with enough creative dynamism, commercial success, and critical praise to become one of the most significant alternative/indie rock records of all time.

So, why not just repeat the formula? Because Radiohead were never ones to rest on their laurels or sacrifice veracity, meaningfulness, or innovation for easily acquired fame and fortune. Instead, they crafted their prophetic art-rock opus: OK Computer. Released on May 21st, 1997, it was a riskier yet even more remarkable artistic leap that — while still feeling at home next to its predecessor — proved to be a game-changer in several respects.

By leaning on a broader array of compositional techniques, highlighting external concerns over internal confessions, and experimenting with song structures, the LP simultaneously altered the boundaries of rock music and anticipated forthcoming political, technological, and social malaise. Today, it endures as a sonic and thematic marvel.

Naturally, OK Computer was written in response to numerous things, including its precursor’s focus on inner gloominess. As reprinted in Radiohead: The Complete Guide, drummer Phil Selway felt that “The Bends was an introspective album… there was an awful lot of soul searching. To do that again on another album would be excruciatingly boring.”

Likewise, vocalist/wordsmith Thom Yorke told NME in December 1995: “You know, the big thing for me is that we could really fall back on just doing another moribund, miserable, morbid and negative record, like lyrically, but I really don’t want to, at all.”

Intending to look outwardly for their next project, the band sought inspiration from what they’d been experiencing and what they saw happening around them. For instance, the exhaustive concert runs and consumeristic promotional cycles for The Bends made them feel somewhat disengaged and inauthentic. “I was basically catatonic [while on tour]. The claustrophobia — just having no sense of reality at all,” Yorke admitted to Rolling Stone in 2017.

That detachment also led him to reflect on his childhood paranoia regarding car accidents (how “anything could happen at any moment and you’re not in control of it”). Plus, he was pondering the “pervading sense of loneliness [he’d] had since the day [he] was born,” as well as the notion that “people get up too early to leave houses where they don’t want to live, to drive to jobs where they don’t want to be.”

(Interestingly, Chuck Palahniuk portrayed analogous concerns of day-to-day isolation and futility in Fight Club, so there was a common air of generational unease in the mid-’90s.)

There was also Yorke’s fear of “information overload” and public disconnection arising from technological advancements such as cell phones and the internet. Finally, and as Yorke explained to NME in 2017, Radiohead were prompted to rally against the false optimism and prosperity spurred by Tony Blair and the Labour Party.

Thus, the group had a lot on their minds and encapsulating it all required them to be just as forward-thinking musically. That meant distancing themselves from the already dwindling reign of Britpop. “To us, Brit pop was just a 1960s revival. It just leads to pastiche. It’s you wishing it was another era,” multi-instrumentalist Jonny Greenwood aptly estimated in the Rolling Stone piece.

To be fair, neither Pablo Honey nor The Bends truly fit within the category, so it’s also not surprising that Yorke was “fucking angry” about being associated with it.

In addition to groups like R.E.M., U2, the Pixies, and Talking Heads, Radiohead incorporated elements of the Beach Boys, Phil Spector, DJ Shadow, Marvin Gaye, Queen, Miles Davis, and Ennio Morricone. “We do try to be diverse,” guitarist Ed O’Brien surmised in a chat with Guitar World, “but because we haven’t paid the dues… to play those types of music, we fail to get what we hope to achieve. But by going down that route, we find our own thing.”

Lastly, Radiohead self-produced the LP alongside Nigel Godrich — who worked on The Bends and would go on to co-produce the band’s subsequent LPs — to achieve maximum independence and unity.

Expectedly, the look of OK Computer was appropriately resourceful and emblematic. Specifically, its artwork included symbolic allusions to industrialization, socialization, capitalism, and the like. As for its famous depiction of two men shaking hands, it’s not a reference to Pink Floyd’s Wish You Were Here. Rather, Yorke clarified, it depicts a person “being sold something they don’t really want, and someone’s being friendly because they’re trying to sell something.”

Several inventive promotional tactics were also employed, such as issuing floppy disks with screensavers, FM radios shaped like desktop computers, and cassette tapes glued inside of players. Yet, the chief maneuver was certainly the creation of Radiohead’s website because they were among the first bands to have one. Not only did it change how they managed their brand moving forward, but it prompted countless other artists to do the same over the subsequent years.

Undoubtedly, those strategies helped OK Computer become a massive success, too, proving that Capitol Records and Radiohead had little reason to be “nervous” about putting it out. In addition to landing at No. 1 on the UK Albums Chart and at No. 21 on the Billboard 200, it earned them their first Grammy Awards nomination (for Album of the Year) and win (for Best Alternative Music Performance).

It also garnered acclaim from publications like Spin, Entertainment Weekly, The Guardian, and Q. At the time, Mojo’s Nick Kent put it best when he wrote that the album “will be seen as the key record of 1997, the one to take rock forward instead of artfully revamping images and song-structures from an earlier era.” Indeed, OK Computer is now considered one of the most “culturally, historically, or aesthetically significant” recordings ever (at least, according to the Library of Congress, which archived it in 2015).

Its fusion of sociopolitical commentary and genre-bending gestations has also inspired dozens of other acts, ranging from Muse, Anathema, Arcade Fire, and Porcupine Tree to TV on the Radio, Daft Punk, Bloc Party, and Childish Gambino. Plus, its place as a semi-conceptual statement (with interludes and voiceovers) led to a resurgence of the format. Without it, we may’ve never gotten classics such as Kendrick Lamar’s To Pimp a Butterfly, The Flaming Lips’ Yoshimi Battles the Pink Robots, The Decemberists’ The Hazards of Love, or Janelle Monáe’s The Archandroid.

Of course, the LP also paved the way for Radiohead’s future works. Be it the heightened sense of synthy seclusion on Kid A; the unconventional layout and electro-rock foundation of Hail to the Thief; or the avant-garde ambiance of The King of Limbs and A Moon Shaped Pool, Radiohead’s aesthetic was forever altered by OK Computer.

Above all else, the album’s thematic insights are still very poignant and disquieting. With a captivating mixture of programmed beats, conventional rock instrumentation, and classical nuances, opener “Airbag” explores the paradox of how automobiles—and thus, technology—can either kill or save you. Obviously, this sentiment harkens back to Yorke’s fear of transit, but it also pinpoints the increasingly salient reality of relying on self-driving cars.

Along the way, its robotic voiceover foreshadows the unsettlingly dystopic musique concrète proclamations of the Black Mirror-esque “Fitter Happier” (wherein listeners are given emotionless instructions on how to live a supposedly proper life).

Similarly, the second verse of “Paranoid Android” — “When I am king, you will be first against the wall/ With your opinion, which is of no consequence at all” — ties into the examinations of political opportunism, totalitarianism, and propaganda subsequently found on the caustic “Electioneering.” Although the group may’ve been talking about Tony Blair, both tracks could easily apply to a few more recent politicians.

The Bitches Brew influenced “Subterranean Homesick Alien” sees Yorke wishing he’d be abducted by aliens so that he could see the world with a fresh perspective. Next, “Exit Music (For a Film)” — originally written for Baz Luhrmann’s Romeo + Juliet — is a fatalistic ode to romance and retaliation whose blend of acoustic strums, mournful wails, disconcerting percussion, and eerie tones are concurrently dreamy and nightmarish.

Elsewhere, there’s the gorgeously off-kilter yet exhilarating “Let Down” — which is about being trapped in transit as people and places pass you by — as well as the lusciously despondent and self-descriptive “Karma Police” (whose title was, ironically enough, later used for a British surveillance program).

Abstract sound collage “Climbing Up the Walls” sets the template for Radiohead’s newest two studio collections, and the exquisitely lethargic “No Surprises” longs for simplicity, honesty, and autonomy in the face of normalized hecticness and deception. In the ostensible aftermath of COVID-19 and President Trump, it remains relatable.

Finally, the magnificently moody “Lucky” — initially penned for War Child International’s The Help Album — swaps the roadside catastrophe of “Airbag” for the superhuman survival of an “air crash.” Then, closing lullaby “The Tourist” acts as a response to everything that preceded it. How? By urging everyone to “slow down” and not get lost in the disheartening frenzy of technology and global turmoil.

Arguably no other rock album of the last twenty-five years has accomplished as much as OK Computer. Building upon some of the attitudes and approaches of The Bends, Radiohead expanded their horizons artistically and intellectually by engendering musical experimentation while holding a mirror to the communal tribulations around them. Consequently, they taught all of us to think differently about how we create, interact, and exist in a progressively messy world.

For better or worse, its lessons continue to linger. 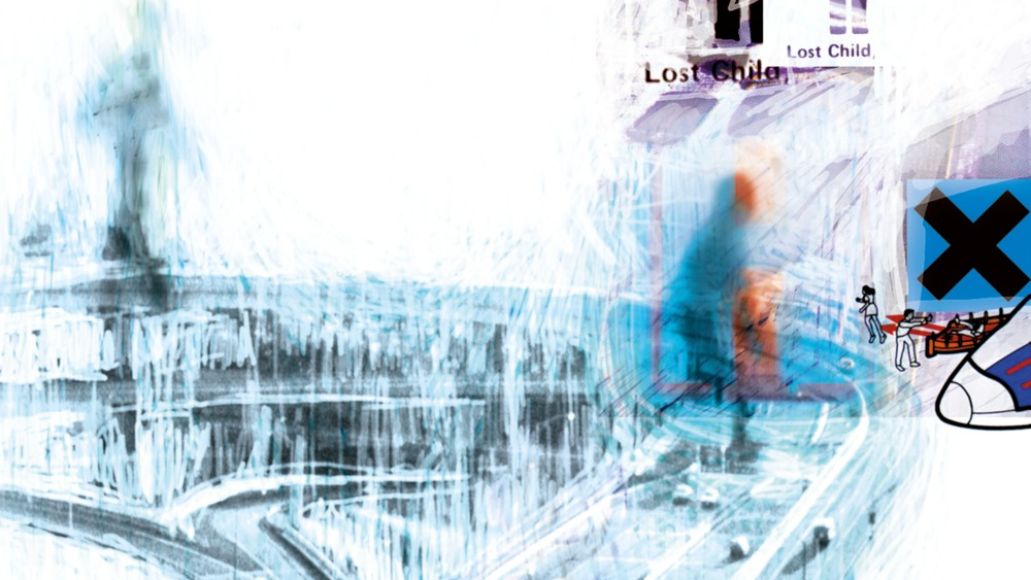