There’s a certain poignancy to Slipknot’s choice of pre-show piped-in track: AC/DC’s “For Those About to Rock (We Salute You).”

That song was the emotional core of School of Rock for a reason. Amid the boredom and frustration and anxiety of daily life, it’s a sacred activity to transcend the B.S. with a healthy dose of heavy metal.

And that’s exactly what thousands of dyed-hair suburban kids, up-for-anything parents and metal-loving weekend warriors did, packed into Barclays Center in Brooklyn, New York, on the evening of May 20th. The mortar fire in the AC/DC tune gave way to actual pyrotechnics — to cheers. In an ironic twist, the track segued into country star Billie Jo Spears’ 1968 recording “Get Behind Me Satan and Push” — which locked onto the name “Satan” and seemed to melt. Devil’s got her — and them.

After that: game on. It’s the Knotfest Roadshow, baby (tickets available here). And despite a near-complete feast of visual entertainment from all corners of the stage — everything from whirling industrial fans to a scarlet-robed character flailing about — frontman Corey Taylor was the undeniable focal point. Slipknot hadn’t played in New York City in more than a decade (the last time being February 2009 in Madison Square Garden) — and knowing how patiently Brooklyn had waited, Taylor gave them everything.

From behind a disturbing new mask — looking like a cross between a depressurized anglerfish and an unraveling baseball — he flexed his decades of showmanship acumen. Prowling the stage, addressing the moshpit and nosebleeds equally, Taylor alone was a feast for the eyes. Plus, whatever vocal exercises the guy partakes in are working: he screamed, sang, exhorted and maniacally cackled for two hours without shredding his larynx in the process.

Obviously, Slipknot are not for everyone. That’s the point. As for the masks, the vibe, and the iconography, reactions tend to be, er, binary. But for anyone confused about what Slipknot can give the world in a positive manner, an “Ask Andrew W.K.” column comes to mind.

“[My boyfriend] has always been into metal and pretty aggressive stuff, but now his musical taste seems to be getting truly evil,” went one concerned letter. As she recounted, she tried to remove his heavy-metal records, but he “freaked out.” W.K. replied, “You know what the biggest negative vibe is in this situation? You. Trying to make your boyfriend give up the music he enjoys — that is true negativity.”

Because, as W.K. explained, morbidity and destruction — what Taylor called “Slipknot’s dark place” onstage — exists within each and every one of us. “Sometimes the angriest music can make you feel the happiest. Because here is a way to interact with those bad feelings in a totally good-feeling way,” he wrote. “It’s cathartic. It’s healing. It’s good for the soul.”

That exactly sums up what the Slipknot show felt like, coming from an utter outsider. All the provocations — the middle fingers, the belching flames, the chanted “666!” — was window-dressing for a night of innocent fun. For a band that penned “People = Shit,” the feeling of love and camaraderie was palpable: letting off steam as a family of metal fans.

If none of this seems like it’s for you, god bless. But if you think other people shouldn’t be able to enjoy it, get your head checked. And be advised that you should behold this spectacle once before you shuffle off this mortal coil.

Preceding Slipknot were rap legends Cypress Hill, sans Sen Dog — he had to drop off of the Knotfest Roadshow due to a non-COVID medical emergency that will require surgery. (“He can’t wait to be touring again and will be back on his feet soon,” the band promised in a statement.)

Post-day-job, bumper-to-bumper traffic from Jersey during bad weather precluded me from seeing most of their set, but it’s already popping up all over YouTube. Just think of classics like “Insane in the Brain,” roiling nimbuses of weed smoke, and a roaring response from the “maggots,” serving as a reminder that heavy music is heavy music is heavy music — genre be damned. Even down a man, Cypress Hill delivered; for an hour, Knotfest looked a lot like Homerpalooza.

Missing most of Cypress Hill also meant missing Ho99o9, a hip-hop/punk outfit out of Jersey, whose inclusion also served to bust down genre walls. That set, too, is all over the Internet: Taylor magnanimously shouted out the “triple 9” several times.

After the show, sweaty, shirtless moshers, Slipknot-shirted diehards (breaking the cardinal concert rule, but who cares?) and gently bemused parents spilled out of Barclay Center into the misty night. There was a feeling of sweet exhaustion, of brotherhood, of being ready to face the weekend and workweek with a cleared head.

Ringing ears, too: as one young guy remarked at a concession stand, where a bartender filled capacious cups of heady Corona, “I feel like I’m underwater.” And as anyone thrown into roiling waves will know, that first breath of air will make you feel alive. And on Friday night, everyone felt alive.

Photo Gallery – Slipknot, Cypress Hill, and Ho99o9 at Barclays Center in Brooklyn, NY (click to enlarge and scroll through): 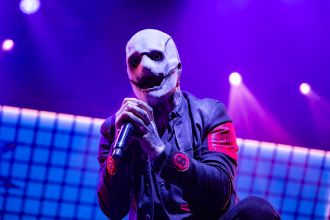 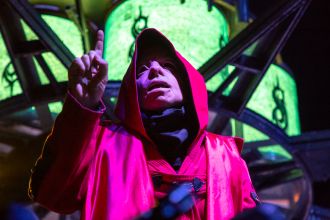 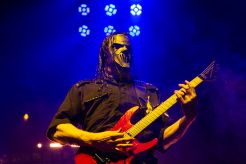 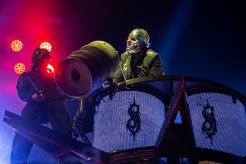 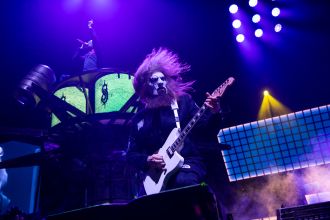 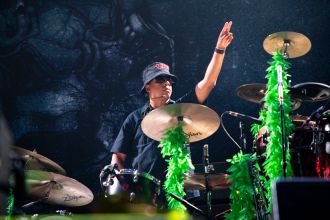 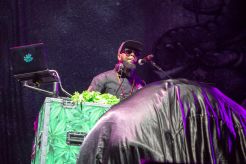 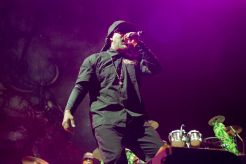 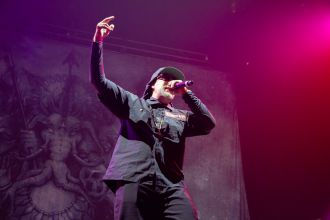 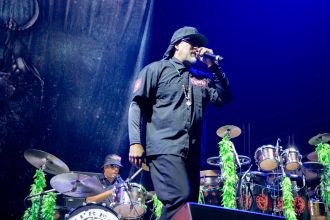 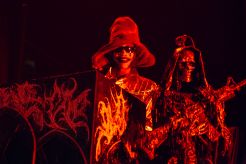 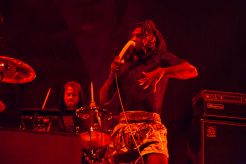 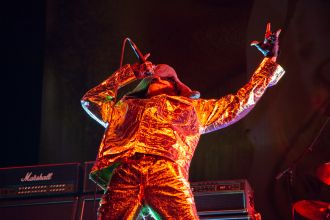 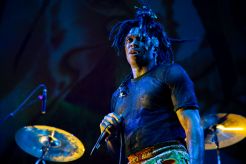 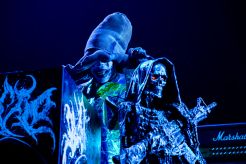 All photos by Johnny Perilla.