A long time ago, we were just stargazing kids, worshiping our letterbox collection of George Lucas’ original Star Wars trilogy. Years later, the Force is strong with us as we do the Imperial March and celebrate Nothing but Star Wars! with a rogue squadron of features, essays, and stories. Today, our staff ranks the franchise’s films and television spin-offs from worst to best.

This feature was originally published in December 2015, and was updated in May 2022 to include The Book of Boba Fett. Star Wars: Visions, The Bad Batch, and Obi-Wan Kenobi will be added later this year. 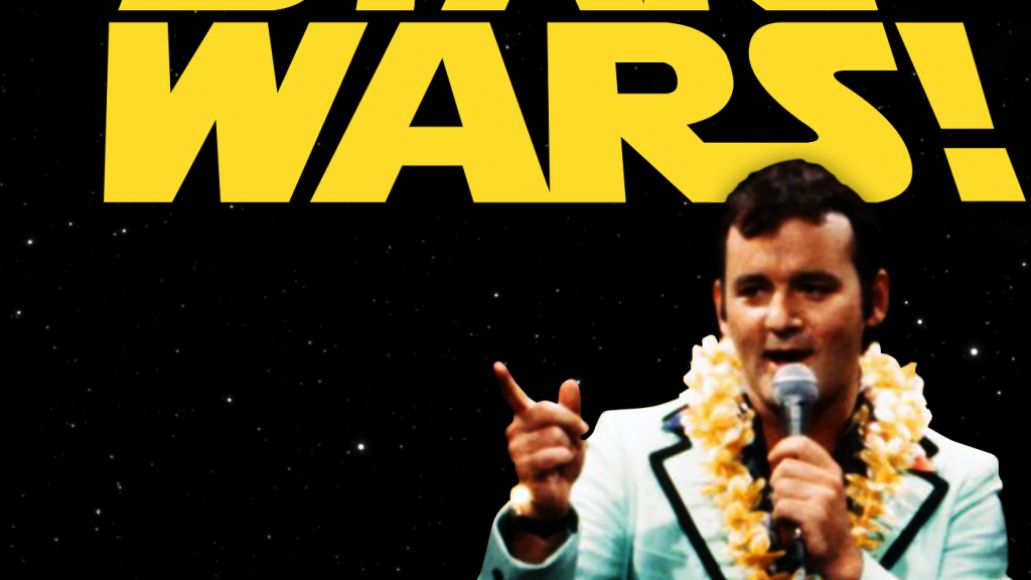 With May the 4th upon us, the staff at Consequence of Sound decided to size up the existing Star Wars televisual universe. From the heights of the original trilogy, to the lows of the prequels, to the decidedly mixed bag of TV shows and holiday specials, we threw it all in a Sarlacc pit, digested it over a thousand years, and saw what came out the other end.

Sure, you might ask, “What good is weighing the Ewok movies against the quote-unquote ‘real’ movies? Of course they’re not as good — they’re made-for-TV kids’ stuff! That’s not a fair deal!” To which we respond, “We are altering the deal. Pray we don’t alter it any further.” After all, the Star Wars universe is a dense web of interlocking and interconnecting characters and stories; why not highlight them all?

Also, it goes without saying, beware of major spoilers ahead. 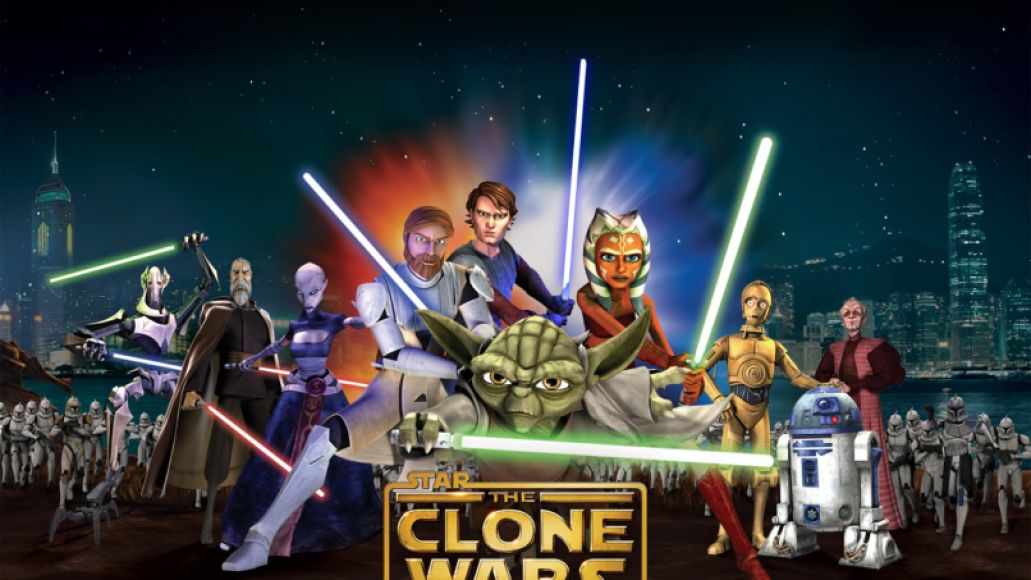 Opening Crawl: A galaxy divided! Striking swiftly after the Battle of Geonosis, Count Dooku’s droid army has seized control of the major hyperspace lanes, separating the Republic from the majority of its clone army. With few clones available, the Jedi generals cannot gain a foothold on the Outer Rim as more and more planets choose to join Dooku’s Separatists.

While the Jedi are occupied fighting a war, no one is left to keep the peace. Chaos and crime spread, and the innocent become victims in a lawless galaxy. Crime lord Jabba the Hutt’s son has been kidnapped by a rival band of pirates. Desperate to save his son, Jabba puts out a call for help — a call the Jedi are cautious to answer…

“Thanks, Wedge!” (Underrated Characters): Captain Rex was as invented of a character for The Clone Wars as Ahsoka Tano, but received a lot less attention – partially because Ahsoka filled the scrutiny-laden role of Anakin’s Padawan and partially due to the fact that he’s a clone. He is, after all, one face among millions of identical ones.

But Rex quickly establishes himself as a memorable and skilled trooper, fighting off wave after wave of Separatist infiltrators during the Battle of Teth and using subterfuge to coyly alert General Skywalker to the dangers of Ahsoka Tano. The Clone Wars always faced an uphill climb separating each clone character into their own personalities. Rex was the first of many unique clones to succeed in becoming individuals – a legacy that has endured all the way to Rebels. 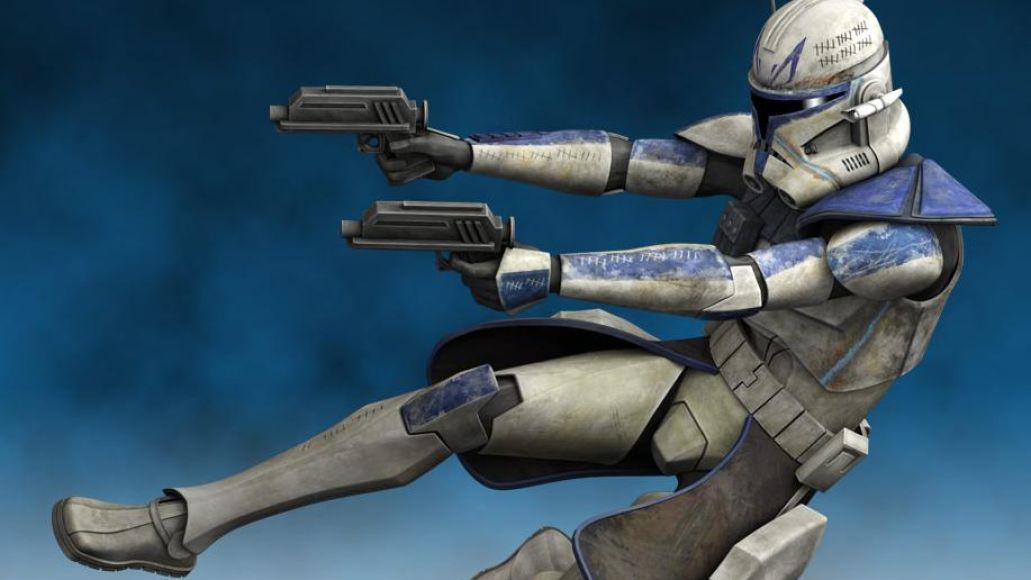 “I Don’t Know? Fly Casual!” (Memorable Ships): In its most egregious sin, the prequels lacked a Millennium Falcon, a ship with enough character that it probably warranted a starring credit. It seemed that The Clone Wars aimed to correct this mistake by introducing the Twilight, an enlarged B-wing-like freighter stolen from Ziro the Hutt’s crime syndicate during the Battle of Teth.

After surviving a crash landing on Tatooine while rushing Rotta the Hutt back to his father, the ship became the closest approximation to a personal ship for Anakin and his compatriots during The Clone Wars television series. But after featuring heavily in Season One, it never was incorporated fully a la the Ghost from Rebels, appearing infrequently. The Twilight was destroyed by Darth Maul in Season Five. In a film and subsequent show dominated by military vessels, from starfighters to capital cruisers, a ship like the Twilight stood out.

“Who’s Scruffy Looking?” (Memorable Alien/Creature): Ziro the Hutt’s introduction was met with a unique set of vitriol – emanating both from liberal and conservative viewpoints. “From a certain point of view,” Ziro was either so flamboyant that he was a caricature or so flamboyant that he should not have appeared in a child-targeted animated film.

But in seven years of social progression, acceptance, and reality, Ziro has become a cult-favorite: a Truman Capote-inspired Hutt as the ruler of an alien crime syndicate. In an otherwise drab film with little flair, the absolutely over-the-top Ziro is a welcome distraction for the final act. 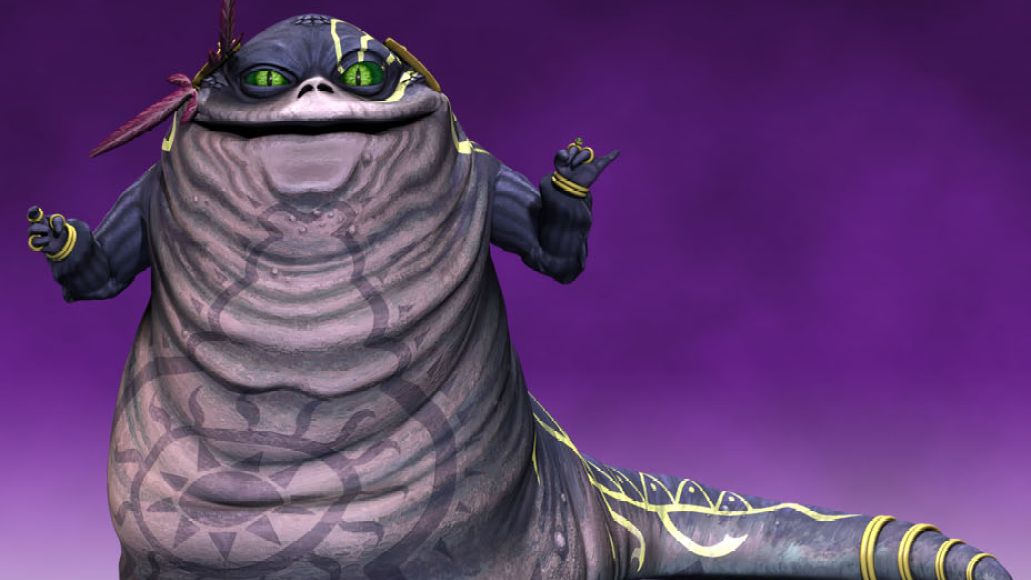 “Never Tell Me the Odds” (Box Office): In arguably the darkest days of the Star Wars legacy, 2008’s The Clone Wars amassed a pitiful $68 million worldwide.

May the Force Be With You (Force Elements): In an underrated and unappreciated use of the Force, both the battles of Teth and Christophsis demonstrated how useful it was to have a Jedi (or Jedis) deflect blaster bolts during infantry and armor charges. Requiring the most precise command of the “Control” aspect of the Force, blaster bolt deflection shielded the advances of the Grand Army of the Republic. On the jungle world of Teth, Ahsoka and Anakin’s command allowed the clone troopers to go vertical and ascend a massive cliff face during a crucial point of their assault.

Lightsaber Options: Ahsoka Tano offered a lot of insight into how well-trained Padawans came to their Masters after being dispatched by (presumably) Master Yoda. Ahsoka arrived to Christophsis a very skilled green-bladed lightsaber combatant that held her own against MagnaGuards and the Sith apprentice, Asajj Ventress.

Ventress herself was armed with twin red-bladed lightsabers. The slight curves in the handles resembled her lightsabers from the now-defunct Dark Horse comics and the 2003 cartoon from Genndy Tartakovsky. Those lightsabers came from Komari Vosa, a Dark Jedi who briefly served Dooku.

MVP Action Figure: If there was ever an action figure worth buying and then immediately throwing away just to keep the accessory, it has to be the Ahsoka Tano with Rotta the Hutt. The Ahsoka face-sculpt is incredibly goofy, but everyone should have a sluglike Huttlet in their action figure collection. 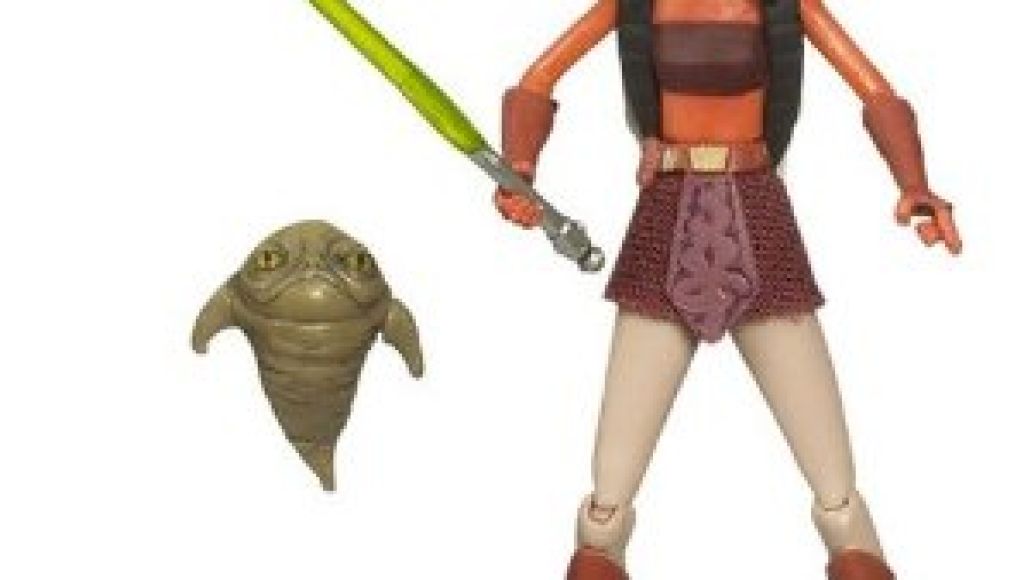 Essential Video Game Tie-In: The Clone Wars film was not the subject of any particular tie-ins. The show did spawn a number of tie-ins. But none were particularly well-received, even Lego Star Wars III: The Clone Wars. The Lego game did include the Battle of Christophsis from the film, however.

Strangest Marketing Tie-In: Rotta the Huttlet was begging for a backpack, and sure enough, the merchandising arm of Lucasfilm obliged. Rotta is so adorable, it almost takes a minute before you realize he will grow up to become the heir to a sinister crime empire. 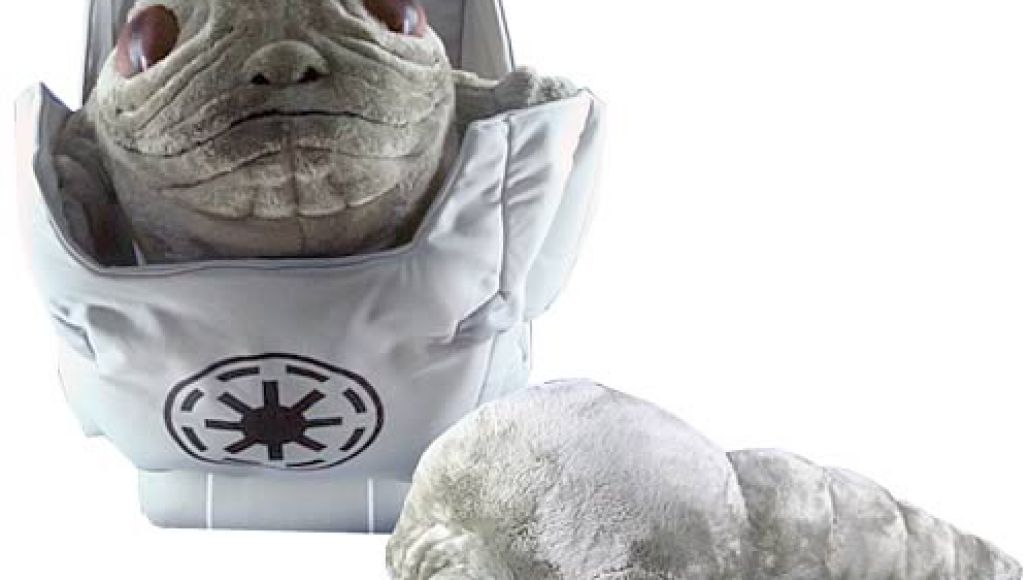 The Scene You’re Looking For (Best Scene): Ahsoka came pre-loaded with the ability to handle a lightsaber. In this scene on Tatooine, Ahsoka saves Rotta from an ambush by three MagnaGuards. In a saga that had been desperately lacking tough females since Leia on Endor, I’d say that’s not bad for Ahsoka’s first few days on the job. 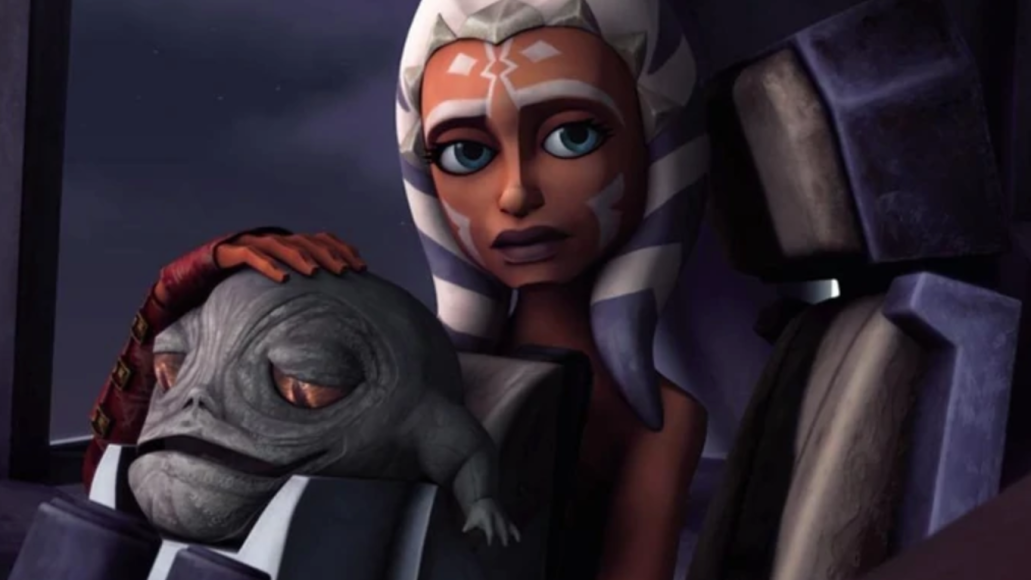 “I’ve Got a Disconsolate Feeling About This” (Analysis): In a bold (and ultimately foolish) move, Lucasfilm Animation brought their first foray into animation since the 1980s to theaters with The Clone Wars. Not truly a film, but instead four stitched together episodes from Season One, the film suffered heavily from pacing and connective tissue. Without the nuances of the television program’s serialized morals, newsreel format, and 22-minute pacing, the film left audience members disappointed and ultimately dreading Star Wars’ uncertain future.

Ultimately proven wrong by a strong five-season run on Cartoon Network (and an even stronger bonus season on Netflix), the changes to form and content initially portended doom. Gone was John Williams’ score, replaced by an electronically heavy and busy score from Kevin Kiner (Kiner also ultimately proved immensely capable during the television run). Gone was a dramatic pacing driven by characters, replaced by sassy Hutts and menace-less Sith apprentices.

Lucas threw a wrench into the Skywalker legacy by adding a Padawan: the sassy, defiant, and unwelcome Torguta, Ahsoka Tano. Movie formatting bred a kind of myopia that longtime fans could not see past. In their minds, Anakin did not have a Padawan, and Ahsoka was certainly not the kind of Padawan that Anakin would handle. In their minds, there’s no chance this film’s pacing could breed character depth and add to the Star Wars mythos in meaningful ways.

And in August 2008, the fans were right. But this film was a film that should never have been – they were never aesthetically intended to be. These were clearly television episodes mashed into a wretched hive of dung and poodoo. Thankfully, Obi-Wan must have hid the other episodes from the Big Screen, and they returned as the New Hope of the Star Wars franchise to overthrow the sting of the prequels.

But on its own footing, The Clone Wars stands as the lowest point of the Star Wars saga.