Reunited emo pioneers Sunny Day Real Estate have been added to the lineup for this year’s Furnace Fest.

Yesterday (May 11th) the Seattle band was announced as part of the Riot Fest 2022 lineup. The festival appearances will mark the group’s first live performances since 2010.

As revealed by SPIN earlier this year, the reunited SDRE lineup includes vocalist/guitarist Jeremy Enigk, guitarist Dan Hoerner, and drummer William Goldsmith. After the band’s initial breakup in the ’90s, Goldsmith joined Foo Fighters along with fellow Sunny Day bassist Nate Mendel (who remains a member of Foo Fighters). Mendel participated in SDRE’s previous 2009-2010 reunion tour, but will not be along for the 2022 performances.

Sunny Day Real Estate emerged in the Pacific Northwest scene during the latter days of the grunge revolution. Although the band was from Seattle and signed to the same label that launched Nirvana (Sub Pop), SDRE would help create the more plaintive “Midwest emo” sound that prevailed in the underground throughout the rest of the decade.

The headlining announcement completes the stacked bill for Furnace Fest, which is set for the weekend of September 24th at Sloss Furnaces in Birmingham, Alabama. Sunny Day Real Estate will appearing alongside other headliners Thrice, Mastodon, New Found Glory, Alexisonfire, Manchester Orchestra, The Ghost Inside, Descendents, and The Story So Far.

“Furnace Fest took a 17-year nap before a group of us banded together with hopes of a one-time reunion,” festival organizers remarked in a prior press statement. “After countless difficulties (like a global pandemic and rescheduling three times) the ‘one-time resurrection’ went so well that we knew it was only fair to share the experience again. We’re beyond excited to share this lineup and are thrilled to welcome 90 total bands on four stages in one, if not the, most unique venues on the planet. To us, Furnace Fest isn’t a festival. This is a family reunion of the most epic kind.” 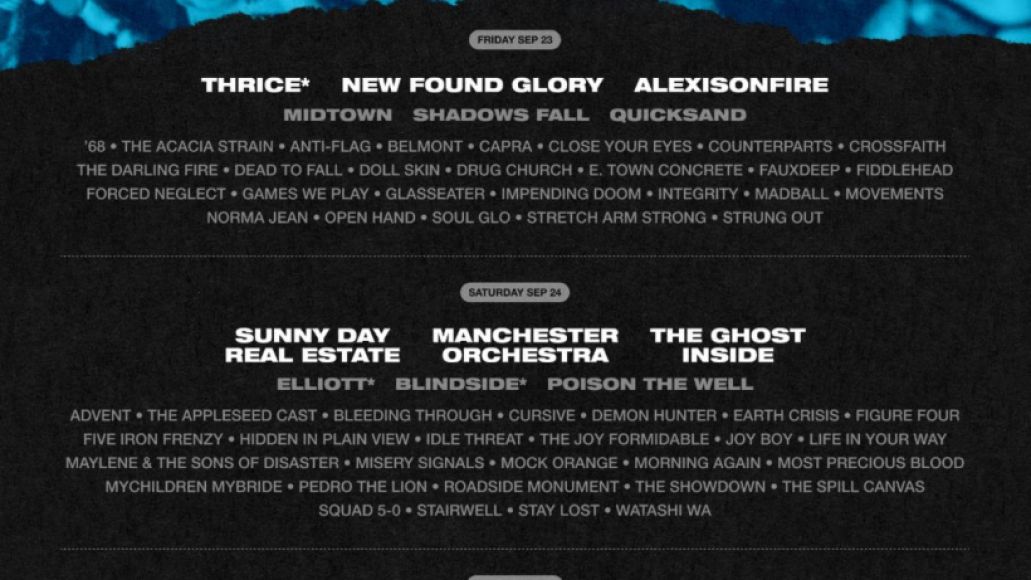