When writer Dustin Lance Black first approached adapting the Jon Krakauer book Under the Banner of Heaven, it was as a potential feature film — an idea that the star-studded cast of the new limited series from FX now sees as laughable. In fact, star Daisy Edgar-Jones literally laughs a little when talking to Consequence about it: “It would not be possible. This is such a rich story, there’s so much to unpack, and fitting that into an hour and a half would not happen.”

Clocking in at seven episodes, Under the Banner of Heaven is a true crime story of the darkest sort, tracking the investigation into the murder of Brenda Lafferty (Edgar-Jones) and her infant daughter in 1984. Starring Andrew Garfield as lead detective Jeb Pyre, the motivation for these murders, we learn, is tied up in the family’s connection to an extremist sect of the Mormon faith, and meaning that the crime has an impact not just on those who knew and loved Brenda and her daughter, but on Black’s own deeply held Mormonism.

Black won an Academy Award for writing Milk, the 2008 Gus Van Sant biopic about Harvey Milk, but it was his Mormon roots that played a big factor in the series, according to Garfield: “He wanted to do some healing for himself and for the Mormon church — specifically to honor the memory of Brenda Wright Lafferty, and Erica Wright Lafferty and to leave no stone unturned, in terms of seeking out the human impulse to that leads to such destruction, such evil.”

But beyond that, Garfield says, the show also “navigates the rough seas that lead from the inception of a religion to the murder of a mother and her child for not being for not obeying their patriarchal religious structure. I think a kind of dissemination and a kind of analysis and a picking-apart of that pathway was a service for us as an audience, and that’s how I felt when I read the book. And now, hopefully, this series is bringing the ideas inherent in that book to a wider audience.”

Avatar star Sam Worthington, who plays Ron Lafferty (one of the men convicted of the crime), was quick to say that the scripts and talent assembled had him “begging and pleading to get the job.” He was especially eager to work with Garfield again after acting opposite him in 2016’s Hacksaw Ridge, saying that “he’s a dedicated professional, and he makes very clear choices and they’re very distinct choices…”

He pauses. “I’m talking a lot of waffle to be honest, because it’s simple — that guy’s eyes change. When you’re acting in a scene with him, his eyes change, it’s no longer you’re opposite Andrew, you’re opposite either Desmond Doss or Jeb Pyre. For another actor, that’s what you want to be around. Someone that is that committed, that their self is left at the door, and you’re dealing with the truth of a character that they’ve created. That’s what that guy does.”

Adds Worthington, “It’s great, but it means that you have to come more prepared. The first time we worked together, I, don’t think I was prepared for it. And then this time I was, and we’ve become good friends because of it.”

Andrew Garfield’s Faith Gets Challenged Once More in Under the Banner of Heaven: Review

Meanwhile, Edgar-Jones took the responsibility of playing Brenda seriously, telling Consequence that, “Knowing that this was based on a true crime that really did happen, and being very sensitive to that because obviously the victims of this crime are very much alive — you know, her family.”

Billy Howle, who plays Brenda’s husband Allen Lafferty, says that the gravity of the crime weighs heavily on him. “That to me is, is still unfathomable. I mean, how anyone could intentionally do that? I don’t think I will ever understand,” he says.

It’s the horrific nature of the crime that perhaps necessitates the need for the full limited series. For, if the story had been condensed down to a feature-length film, Worthington says, “it would’ve just been about the investigation, you know what I mean? Or the murder. It wouldn’t have had the relevance that it has as a bigger picture. It would’ve exploited [Brenda’s] murder rather than, you know, giving it weight.”

“I heard Lance, Ron Howard, and Brian Grazer talk about how they tried to put it together into a two-hour episode, and it didn’t work. They couldn’t do it. They felt that it was actually diminishing the story and journey of Brenda, to be honest. What I liked is that all those guys see that it’s important to give her a voice and her spirit a journey and a respectfulness to it,” Worthington says. “And so the seven hours, it gives her a bigger weight than trying to cram it in into a two-hour movie. A movie has a ticking time clock. You can’t really unwrap it.” 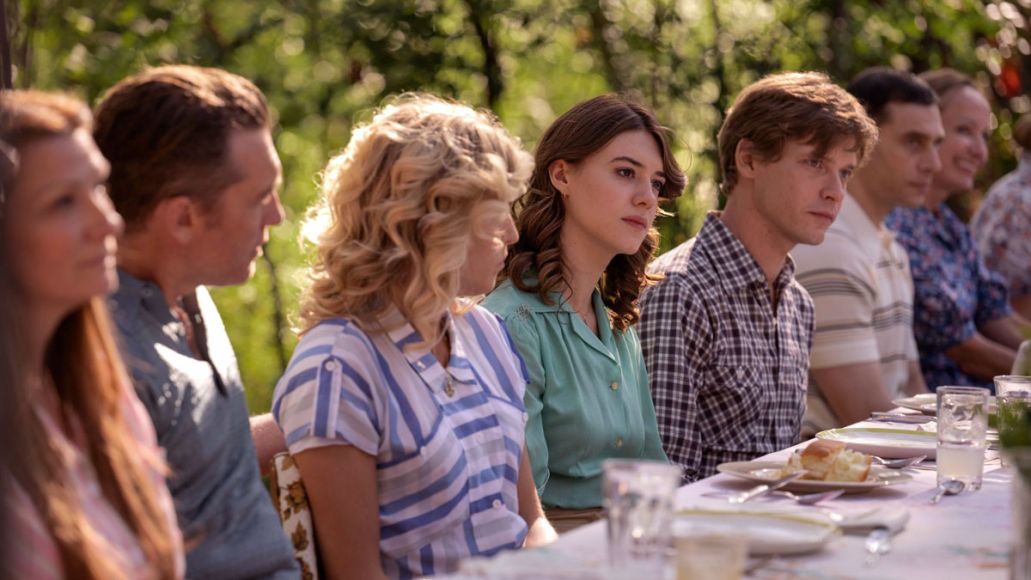 Under the Banner of Heaven (FX)

The expanded runtime also allowed the series to explore how faith affects the lives of everyone involved, an important aspect for a narrative like this, since everyone’s relationship to the Mormon faith is different.

“I didn’t grow up religious,” Edgar-Jones says, “I didn’t know anything about this particular community ahead of researching it for the project. So, it was really interesting to learn about it and to see how it influences the family dynamic and how much it is wrapped up in all the characters’ sense of self… Brenda’s relationship with the community is very different from the Laffertys. So that was really cool too, to see how subjective it is for each individual.”

As Worthington says, “It’s more about the radicalization of a faith, and I think that’s the cautionary tale of this story. And that’s appealing because it’s been in religion throughout history and it is relevant to today. And I think that Lance is aware of that when you put this together. I think part of what he was trying to say is, you know, be careful, because it’s not only happening in the [Latter-Day Saints] community, but it can happen in any faith.”

What is Worthington hoping audiences take away from the series? “Hopefully we haven’t exploited the murder of this poor girl and a baby,” he says, “And that we’ve reflected on how something like this could have happened in such a pious and devoted community.”

To get the full picture of that tragedy, all one has to do is watch the complete series. “It’s unfortunately a very American story,” Garfield notes. “[Mormonism] is a religion that was founded in the Americas. It’s a religion that was founded by a colonial mindset and a patriarchal mindset and an environment where women are not treated as anywhere near equal, in fact, oppressed and in lots of cases, abused to different degrees. And personally, that’s a really important thing to expose and shed light on, as someone who wants to see the better future that anyone with any kind of decency wants to see.”

The first two episodes of Under the Banner of Heaven are streaming now. Subsequent episodes will be released Thursdays on Hulu.