When Pharrell Williams announced the 2022 Something in the Water lineup in April, he blocked off time for Pharrell & Phriends, which included “some people we can’t announce.” Those Phriends have been worth the phwait, as the super-producer has booked some of the most exciting names in his storied discography: Clipse, Justin Timberlake, SZA, Q-Tip, and N.O.R.E.

The more famous half of Clipse had already committed to Something in the Water, with Pusha T taking his Pharrell-produced  new album It’s Almost Dry to the Washington DC fest. He’ll be joined by his real-life brother No Malice for the Pharrell & Phriends section, and they’ll have plenty of Williams’ joints to choose from; Williams famously convinced them to perform as a duo instead of solo artists in the 1990s, and his group The Neptunes produced every Clipse album from breakout hit “Grindin'” through farewell statement Til the Casket Drops.

Williams and Clipse were both on-hand to help Timberlake leave NSYNC behind. His debut single as a solo artist was 2002’s “Like I Love You” featuring Clipse, and The Neptunes also produced “Señorita,” “Rock Your Body,” and most of the non-singles on Justified. This represents a rare opportunity to see the semi-retired Timberlake live.

Besides that, The Neptunes and Williams were among the most common producers that N.O.R.E. turned to during his heyday. Pharrell also co-wrote “Supermodel” with SZA and collaborated with Q-Tip on the remix to “She Wants to Move,” a single from The Neptunes’ side project N.E.R.D.

While Pharrell & Phriends is quickly becoming a main attraction, Something in the Water continues to flesh out its lineup. As part of this announcement, the fest also added Anderson .Paak and the Free Nationals, bLAck pARty, J Balvin, and 21 Savage to the lineup, as well as local Washington DC groups Bad Brains: A Tribute by Black Dots, TOB, and YungManny.

Amazon Music will be livestreaming the event through Twitch and Prime Video. “Amazon Music always has the most innovative programming and I’m thrilled they have come onboard to livestream Something in the Water’” Williams said in a statement. “By livestreaming they are helping give access to so many people who can’t travel to DC Juneteenth weekend.”

Previously announced headliners included Tyler, the Creator, Run the Jewels, and Usher. Check out the latest lineup below. It all goes down June 17th-19th and tickets are available here. 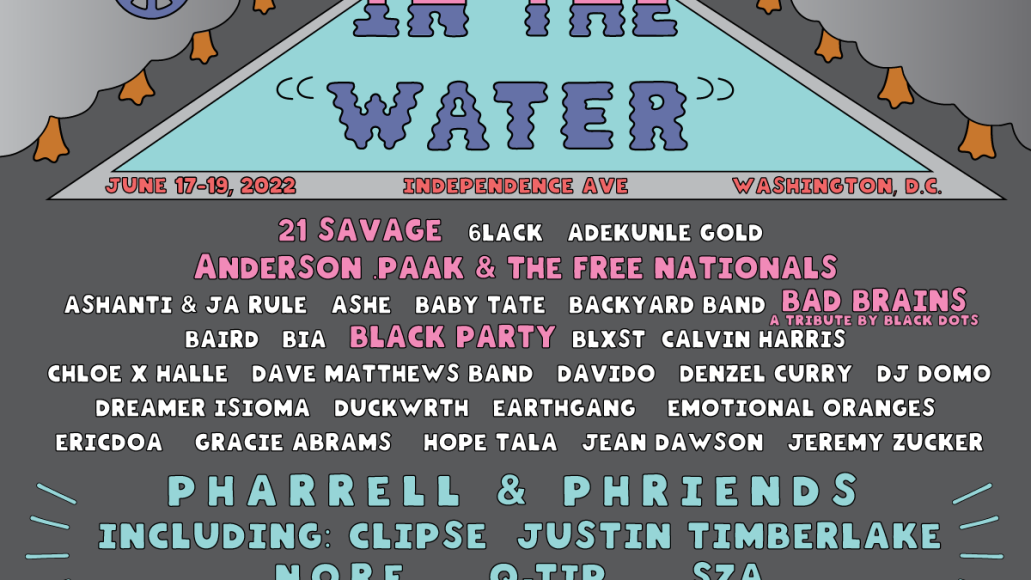 Clipse, Justin Timberlake, and SZA Join Pharrell's Something in the Water Festival