The Pitch: In God’s Favorite Idiot, Clark (series creator and writer Ben Falcone) is a dopey middle-aged single guy who walks into his backyard one day looking for his cat Skittles, and is struck by lightning. Not only does he survive, but other bizarre things soon start happening. When he’s happy, his entire body glows like he’s a human lightbulb, and one of his favorite songs, “Sign of the Times” by Harry Styles, starts magically wafting through the air.

Clark’s co-workers notice his otherworldly powers first, especially his longtime office crush Amily (Melissa McCarthy). The strange situation brings them closer, but on their first date, he starts glowing in public for the first time. Bystanders get out their phones and film the luminescent Clark, and the viral videos turn him into an overnight celebrity. Soon, an angel named Chamuel (Yanic Tuesdale) appears from out of the sky to inform Clark that he’s a prophet, chosen by God to prevent the apocalypse. Clark doesn’t know how he’s supposed to do this, though, so he runs through a series of unsuccessful attempts to spread God’s message via skywriting and TikToks.

Clark battles the Four Horsemen of the Apocalypse in the supermarket, fights off the protesters and reporters that crowd around his home, and keeps going to his office and trying to retain a little day-to-day normalcy. And when God does finally show up to explain Clark’s mission, she remains frustratingly vague and cryptic, but she at least brings him some Starbucks.

Power Couple: God’s Favorite Idiot is the first starring vehicle for Ben Falcone, best known as co-star Melissa McCarthy’s husband. They’ve been married since 2005, when she was still a supporting player on Gilmore Girls, and have two children together. And in the decade since Bridesmaids launched McCarthy as a major movie star, Falcone has been her primary creative partner, directing five of her films, most of which they co-wrote.

Tammy, The Boss, and Life of the Party were all box office hits, but they weren’t particularly big ones by McCarthy’s standards. And the Falcone collaborations have consistently been some of her most poorly reviewed projects – 31% is the best any of their movies, 2018’s Superintelligence, has gotten on Rotten Tomatoes. 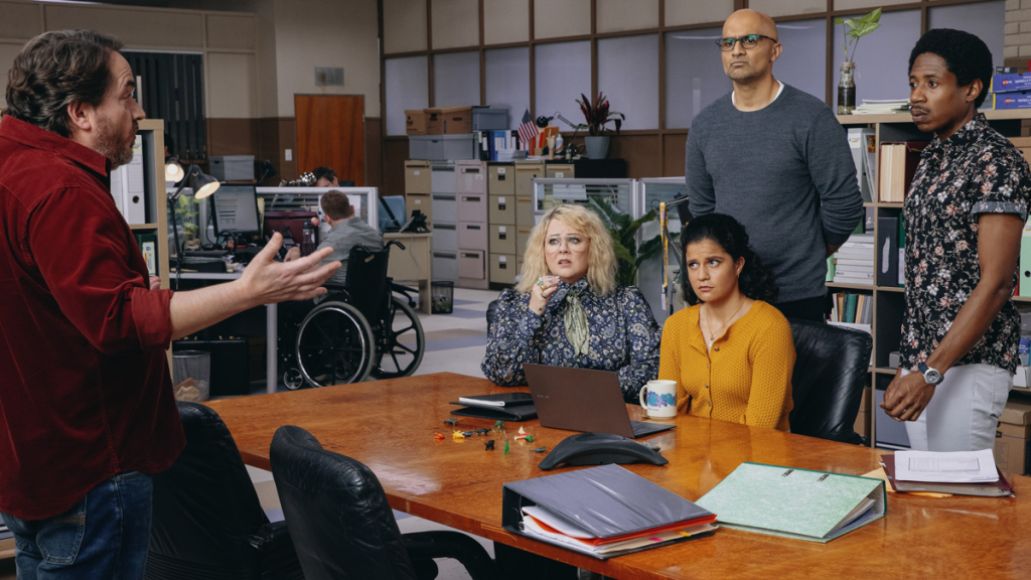 Ben Falcone is a bland but genial screen presence, and he knows it. The whole point of the series is that nobody knows why God would speak to humankind through an otherwise unremarkable white American man with a dead end office-job. And Falcone is at his funniest when he’s a shy, stammering mess. Even when Clark gets up the nerve to ask out Amily, he makes it as awkward as possible: “In a non-harassment way in the workplace, I wanted just to say that I think that you’re not ugly, in an attractiveness way.”

Unsurprisingly, Falcone cedes the spotlight to his more famous spouse pretty often in God’s Favorite Idiot. Amily is a familiar kind of Melissa McCarthy character: loud and uninhibited, drinking from a flask in the office, and listening to Rush while racing a scooter around town like a Hell’s Angel.

In its best moments, God’s Favorite Idiot is a workplace sitcom where Clark and Amily bond with their officemates over their unusual predicament, casually discussing the impending end of the world in the breakroom and the office bathroom. And they have a likeable supporting cast that includes the argumentative Tom (Chris Sandiford) and the thoughtful Wendy (Ana Scotney, the only Australian in the main cast despite the fact that the entire series was shot in New South Wales).