The Pitch: Mira Harberg (Alicia Vikander) is an A-list Hollywood action star, hot off a Marvel-like superhero film called Doomsday whose smash success is colored by losing her assistant and lover, Laurie (Adria Arjona), to the film’s director during the shoot. Licking her wounds, she takes a break from blockbusters to fly to France to shoot a limited-series remake of the 1910s French serial Les vampires, in which she’ll play the iconic cat-suited criminal Irma Vep.

But the shoot is suitably manic and unpredictable, from its director, René Vidal (Vincent Macaigne), being such a volatile, insecure mess that the financiers won’t insure him to her prima donna castmate, to Vincent Lacoste’s Edmond, who keeps trying to change his dorky detective character to better flatter his machismo, and off-the-wall German actor Gottfried (Lars Eidinger), who’s a crack-addled agent of chaos. And all the while, Mira digs herself further and further into Irma’s perspective, growing closer to blurring the lines between the two altogether.

Day for Night: The most important thing you need to know about HBO’s latest miniseries is that it’s a remake — not just that, a remake from a filmmaker revisiting his own previous material. In 1996, French filmmaker extraordinaire Olivier Assayas prodded at the vagaries of the French film industry with Irma Vep, a similarly chaotic tale of a beleaguered French art film project starring a high-profile lead who gets lost in the art (there, it was Hong Kong superstar Maggie Cheung playing herself).

In 2022, he’s decided to look back on that story and see what new material he can mine for satire, both in the industry and in his own career, and the results are absolutely intoxicating.

A lot of that comes through in the character of Vidal, Assayas’ clear stand-in for himself, played with repressed volatility by Jean-Pierre Leaud in the original but now, in Macaigne, a desperate boy filled with regrets. He takes antidepressants to better manage his mood swings, but he confesses to Mira early on that he’s “never happy… I tried it, and I decided it was not for me.” Like Assayas himself, he’s taking another crack at Irma Vep after one attempt earlier in his career — one that led to the dissolution of a relationship with its star, Jade (Vivian Wu, clearly standing in for Cheung, to whom Assayas was once married).

But the rest of Irma Vep is suffused with Assayas’ own neuroses about the role of art in cinematic storytelling, especially in a world of prestige-drama limited series and the omnipresence of blockbuster filmmaking. Vikander is slinky, loose and unrehearsed as Mira, which makes it easily one of her very best performances: there’s less of the language/culture barrier that Cheung experienced in her version of Vep, but that’s replaced here by the twin pulls of fulfilling, “Important” work and the opportunity to make boatloads of cash playing a female Silver Surfer (as her agent, played with effortless wit by Carrie Brownstein, so clearly wants her to do). 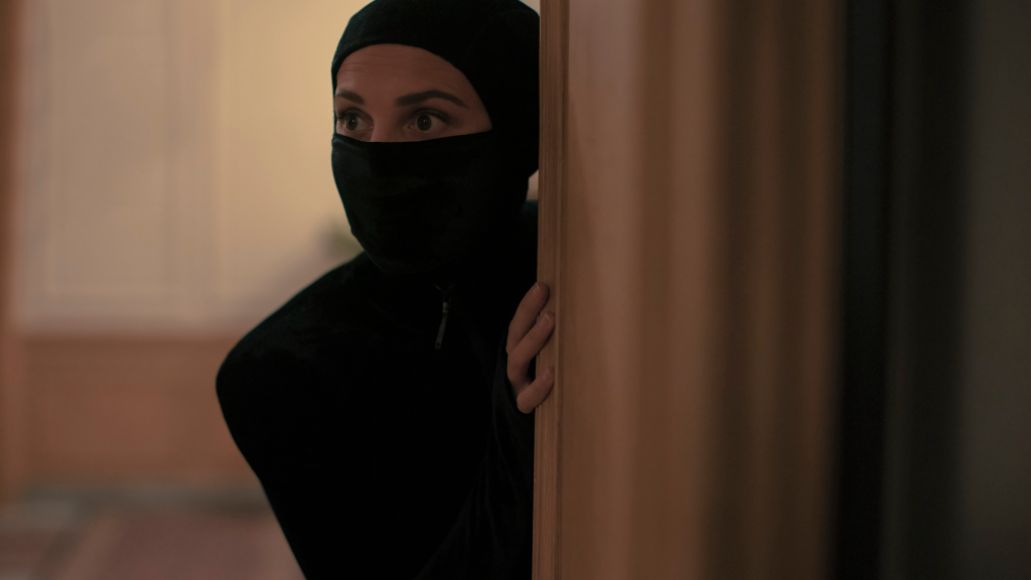 All the while, the ghost of her lust for Laurie lingers, as she starts entertaining the flirtations of her new assistant (Devon Ross) and the show’s older costume designer. When she pours herself into the role’s signature velvet catsuit, she often finds herself slinking around the building, hiding from people, testing the kind of invisibility stardom hardly affords her. It, like the role and the project itself, messy as they are, feel liberating, and both Vikander and Assayas love playing with those layers.

“This is Not a Series, It’s A Film Divided Into Eight Parts”: Similarly, Assayas loves to just let his characters breathe, most of Irma Vep‘s most interesting exchanges happening in the moments between takes. Every major character believes in the project, but for different reasons, and the dissonance in their approaches leads to some nifty conversations about art as “content” and the ways our creative efforts reflect our own personal wants and needs.

Sure, the convos feel like mouthpieces for Assayas’ own bugaboos about how hard it is to make True Art in 2020s cinema now. But the overriding casualness and un-self-seriousness of it makes that particular pill much easier to swallow.

Despite its French setting and sensibilities, though, it’s hardly a stone-faced debate: Irma Vep is slyly funny and sexy from the get-go. Macaigne plays Vidal with giggle-worthy desperation, and Gottfried’s fly-in-the-ointment personality gets some great laughs (“I got bored with gay culture,” he nonchalantly purrs when asked why he identifies as straight now).

At all times, the production feels held together by spit and string — the frequent glimpses we get of the finished product as they shoot are Drunk History-level chintzy — and yet it keeps going, stretching the madness out even further.

The Verdict: Even if you haven’t seen the original Irma Vep, or aren’t armed with the complexities of Assayas’ biography, the series remains a loose, fun, and idiosyncratic behind-the-scenes jaunt. But arthouse cinema fans (and Assayas fans in particular) will really dig the ways the filmmaker ruminates on his own career, and the state of an industry that sees the kinds of films he loves to make relegated to extended limited-series events on streaming services and premium cable. After all, it’s only kids’ films and superheroes that dominate the box office now; there’s no room for quote-unquote “art.”

The great thing about Assayas, though, is he has an inexorable knack for turning really heady, potentially pretentious material and making it feel light on its feet. More than anything, Irma Vep is a quirky showbiz dramedy with some of the most deceptively smart writing on television, and that’s worth tuning in for.

Where’s It Playing? Irma Vep takes a long drag on a cigarette and ruminates on the difference between art on commerce on HBO and HBO Max starting June 6th.

Irma Vep is a Refreshingly Meta Take on the Lines Between Art and Life: Review