Sony unveiled the news during the opening day of France’s Annecy International Film Festival on Monday. During the Sony Animation presentation, attendees were treated to a number of clips from Across the Spider-Verse, revealing Schwartzman’s The Spot, Taccone’s “anachronistic version of The Vulture,” and Shea Whigham’s George Stacy (father of Gwen Stacy, voiced by Hailee Steinfeld).

The Spot is a classic C-list Spider-Man nemesis. In Across the Spider-Verse, he’s described as a villain whose “whole body is covered in interdimensional portals (made to feel like “living ink”) that can send him anywhere he wants to go. He can also make these portals appear out of thin air to transport objects and people at will.”

There’s no specific word on what the “anarchronistic” take on The Vulture (familiar to MCU fans given Michael Keaton’s portrayal in Spider-Man: Homecoming… and Morbius) will be, but it sounds like it will be the 2099 version. The clip that revealed Taccone’s character featured Spider-Man 2099, aka Miguel O’Hara (Oscar Isaac), as well as “the incomparable (and pregnant!)” Spider-Woman, aka Jessica Drew (Issa Rae).

Check out a first-look image of Schwartzman’s The Spot battling Spider-Man (aka Miles Morales, Shameik Moore) and Gwen Stacy: 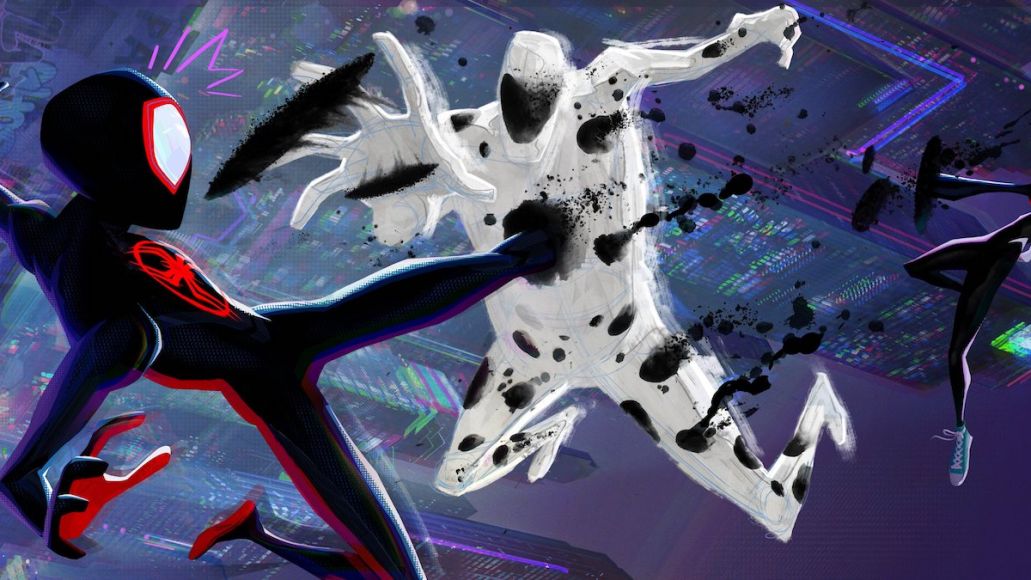 Spider-Man: Across the Spider-Verse Part 1 (Sony)

Sony’s Annecy Festival presentation also teased a visit to Gwen’s homeworld, Earth-65. “Everything is beautiful,” teased the Sony Pictures Animation Twitter account. “Think watercolors, layered brushstrokes, and paper textures.” Into the Spider-Verse wowed with its unique visual style, and it seems we’ll be getting more incredible artwork in the sequel.

Finally, Rachel Dratch has joined the Spider-Man: Across the Spider-Verse cast as Miles’ school counselor (though IMDb lists her as “Principal”).

Sony announced last year that the Into the Spider-Verse follow-up will be split into two parts. Across the Spider-Verse Part I keeps getting its release date pushed; originally set for April 2022, it was moved to October 7th due to the pandemic, but is now finally set for June 2nd, 2023. Part 2 is currently expected in March 2024, while we haven’t heard firm word on the all-female spin-off in some time.

Christian Bale Would Return to Batman Under One Condition

Jason Schwartzman Voicing Villain The Spot in Spider-Man: Across the Spider-Verse