The feminist art collective, along with members of the Lakota Indigenous Ikiya Collective and the feminist cryptocurrency group Unicorn, donned gopnik tracksuits and green scarves — which were popularized in Latin America while fighting for reproductive rights — as they threw the banner over the balcony of the Capitol’s third floor. A photo of the action is being minted as an NFT and auctioned off via Party Bid, with all of the proceeds from the auction benefitting reproductive rights organizations.

A Supreme Court draft opinion leaked last month that revealed plans to overturn Roe v. Wade, sparking a renewed interest in preserving the right to an abortion. However, reproductive rights have been under attack for quite some time. Last September, the Texas Senate passed what is colloquially known as the Heartbeat Bill, which bans abortion at about six weeks — before many people even know they are pregnant.

“Body autonomy is a pillar of modern civilization. There’s no human rights as we know them without body autonomy taken as an axiom.
People with wombs demand body autonomy. We demand our rights, we don’t ask for it.
Don’t like abortions? Don’t make them.
Oh yes, and did you know? Vasectomy prevents abortions.

Ikiya Collective knows that violence to the body is violence to the land. Since the violent onslaught of colonization, settler patriarchy has violated the sacredness of Indigenous bodies and lands. We see this happening clearly in the so-called state of Texas. For our ancestors, for our lands, for our future generations, we will stand for the land and fight for reproductive justice that grants us the bodily sovereignty we have been denied for too long.

See a photo of the banner and a video of Pussy Riot’s latest protest below.

The action follows the Russian collective’s first foray into cryptocurrency, an NFT that raised money for Ukraine. Speaking of that, founding member Maria Alyokhina recently revealed that she escaped her country during the war by disguising herself as a food courier. 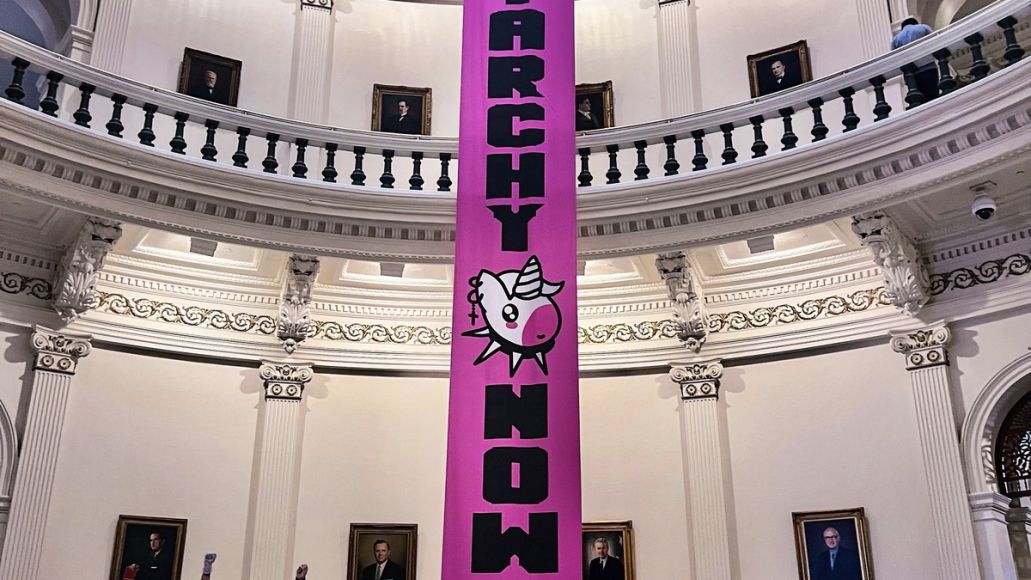