It was the final day of February in 2020 when Soccer Mommy released Color Theory, her brilliantly crafted, exquisite sophomore album. Little did she know it would become an indie staple of the following months’ ensuing lockdowns, especially with darker lines like, “Cause I cling to the dark of my room/ And the days thin me out/ Or just burn me straight through” on “Circle The Drain,” or, “I guess the lesson’s learned, I’ve barely left my room in the past week/ And I’ve got my guard up trying all the time to stay clean/ But I don’t feel anything, I don’t feel anything” on “Bloodstream.”

Of course, Soccer Mommy — the project of Nashville-based singer and songwriter Sophie Allison — had no way of predicting that the vulnerable confines of her writing would reach us as we, too, were confined, and that the sweet surrender of Color Theory would indeed take on a much larger meaning throughout the pandemic. Nevertheless, Color Theory proved that Allison was in more command of her songwriting than ever before, and her unique combination of shoegaze, dream pop, and psychedelic indie rock was a magical antidote to the darkest times.

Now, with her third full length Sometimes, Forever, arriving this Friday (June 24th), Soccer Mommy is back with yet another attempt to translate the darkness into something spellbindingly beautiful. There are a few different ingredients to Sometimes, Forever that distinguish it from Soccer Mommy’s earlier efforts; for one, Allison teamed up with super-producer and electronic extraordinaire Daniel Lopatin — AKA Oneohtrixpointnever — and the resulting album is her most expansive and experimental work yet.

Then there’s the chopping, fascinatingly fractured “Unholy Affliction,” which is one of Soccer Mommy’s most synth-forward experiments yet, and demonstrates that her pairing with Lopatin can lead to a wildly new and hypnotic path. According to Allison, she jumped at the idea of working with him: “I’m a big fan of his, and when my label sent over a list of possible producers and I saw his name on it, I was like, ‘Woah, that’s crazy, that would be amazing.'”

She goes on to praise not just his unique style of production, but the strengths he offered behind the boards. “In my mind, I think he’s just an amazing arranger and composer, and he knows how to make special moments in songs,” Allison says. “I love the types of sounds and the sonics in general that he uses. Not only in his music, but when he works on somebody else’s stuff.”

Allison references “Unholy Affliction” in particular as one of the bolder products on Sometimes, Forever. “I did want it to be dark and mechanical, but I couldn’t have imagined what we could’ve come up with — but also, it turned out exactly how I wanted,” she says. “I feel like [Lopatin] took it to the next level; he brought so much dark, evil energy and this kind of fantasy, magical ambiance… I think he just pushed everything to really cool extremes.”

Those “extremes” that Allison mentions are at the heart of Sometimes, Forever. Throughout, there is an air of both darkness and lightness, of hope and futility. Soccer Mommy has embraced these opposites before on her albums, but Sometimes, Forever — as its oxymoronic title suggests — leans in harder than ever before.

Allison agrees, noting that “we really wanted to play with those opposing ideas battling back and forth, but also coexisting.” She brings up the song “Darkness Forever,” another eerie and unsettling highlight, as a guidepost for reflecting these concepts. “[That song] is very dark, but then we have this bridge — which was also Dan’s idea — that goes into this lift, that feels suddenly like a reprieve with a wash of brightness.”

It’s fitting that Soccer Mommy and Sometimes, Forever revolves a lot around the hazy dynamics of shoegaze — after all, there’s no better way of integrating bitterness into sweetness by cranking the reverb high and bathing guitar-addled melodies in atmospherics. With the exception of “Unholy Affliction,” guitar is still Allison’s weapon of choice on the album, and her commitment to making guitar lines and chord combinations feel like the first warm rays of the morning sun is, frankly, irresistible.

She does, however, cite “Darkness Forever” as her favorite of the bunch to play live: “It’s really fun, and there’s nothing like that heaviness, and you get to actually play it and it’s loud as hell and you’re all fuzzed out… it just feels great.”

Another highlight, “Don’t Ask Me,” feels like Soccer Mommy’s shoegaze thesis, bursting with energy and life (and volume), but still resigned to a patient, dreamy glow. “Don’t Ask Me” in particular features one of the best drum performances on the album, and Allison is quick to credit drummer Rollum Haas for bringing such dynamic drum parts to Sometimes, Forever: “The drums don’t have that sound that a lot of indie rock and pop is doing right now, where it’s kind of dead and punchy — there’s more air to them. The room sounded great, the drums were tuned nicely by Rollum, and we got a sound that really reflected the feel of the kit.”

Indeed, Allison’s influences as a songwriter and arranger live in many eras, but a great deal of them feel inspired directly by alt rock of the nineties. According to Allison, she and Lopatin had an ongoing chain of text messages sharing different songs that would go on to inspire Sometimes, Forever. “The sonics are a collaboration of a million little influences that you can think of from song to song,” she says, calling to mind the work of Smashing Pumpkins, The Smiths, The Cure, Portishead, Black Sabbath, and of course, shoegaze pioneers My Bloody Valentine as major influences.

The latter act is a huge figure for Sophie Allison in particular; towards the end of our conversation, I ask that if she could hypothetically be a support act for any band or artist’s headlining show, who would it be? Without much thought, she answers: My Bloody Valentine. “I feel like that’s just like God in a sense, and not only that, but it’s not someone who is touring commonly, so it would be really special playing those shows and have your ears bleed every night!” she says.

Nineties nostalgia and hypotheticals aside, Soccer Mommy has fully come into her own as a songwriter. She recalls her early days in college at NYU, where she maintains she was very “quiet” and didn’t talk to anyone in class. Throughout her short time in New York, though, she was a frequent performer in DIY spaces and intimate venues, uploading songs onto Bandcamp and playing shows with just her and her guitar.

Though her status has completely transformed throughout the last few year, Allison maintains that her writing style is the same: “I don’t get any studio time and sit there and work through anything. I just pull out my guitar while I’m watching TV and mess around, and if any idea comes up, I just go with it, just like I’ve done since I was five years old.”

However, she does mention that her sense of professionalism has changed a great deal since the early days. “When I performed, it was very spur of the moment. I never practiced, I was just like, ‘Whatever, I’ll just play some songs,'” she says, “So now, it’s just more professional. I still have the same enjoyment, but I also just have more goals for myself in mind and for the music.”

Sophie Allison has certainly matched her ambitions with her output, and Sometimes, Forever is a commitment to her inimitable style. More than that, it’s a thorough and nuanced exploration of these “conflicting ideas” that Allison outlined — a way of translating her personal battles to something widescreen, vibrant, and at times, a little haunting.

“At one point, Dan kept joking that this album is like an ‘Angels and Demons’ record,” Allison says, “and it’s like, yeah, it’s got this sense of this kind of beauty and this light and then right next to it, you have this ugly darkness that sometimes even at the same time.” Where previous albums Clean and Color Theory featured a more patient, refined production style, she finds acres of space to explore the grey areas on Sometimes, Forever.

And when she does acknowledge that darkness and that ugliness, it’s done with bliss as a primary ingredient. With each spacey, psychedelic experiment, one thing is becoming clear: no one else has quite the same range. 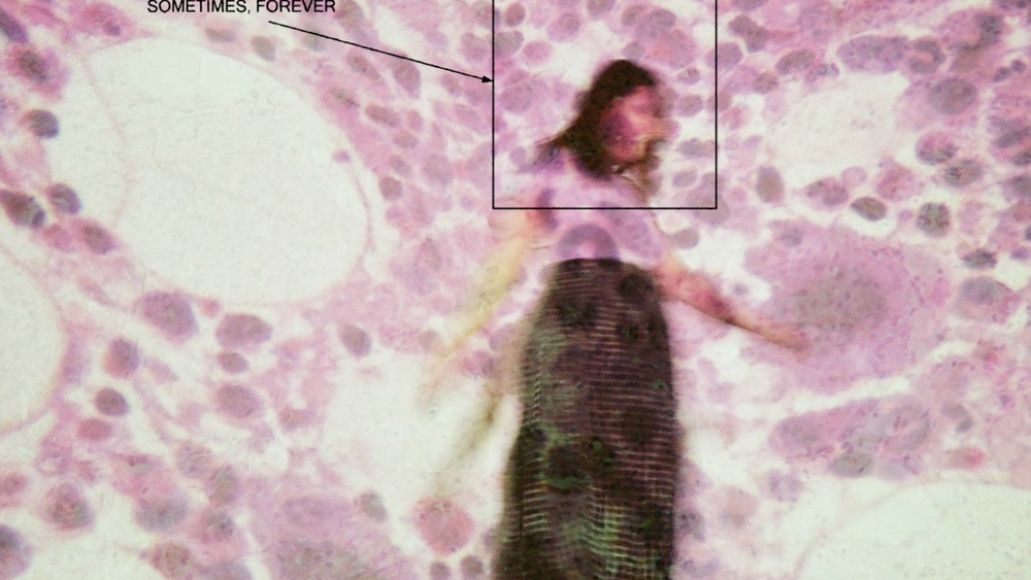 The Kaleidoscopic Allure of Soccer Mommy