The Pitch: Carmen “Carmy” Berzatto (Shameless‘s Jeremy Allen White) is a young, ambitious chef who fled his working-class Chicago roots to spend a few years as one of the hottest chefs at a prestigious New York restaurant. Now, he’s returned home, feeling the joint stings of professional burnout, alcoholism, and (most importantly) the tragic death of his older brother by suicide. What’s more, Carmy’s brother left him the family business, a down-on-its-luck Italian beef joint called The Original Beef of Chicagoland.

Now, he’s tasked with not just keeping the place afloat, but bringing his haute cuisine training to the restaurant and the gaggle of misfits that work there, from his hotheaded cousin Richie (Ebon Moss-Bachrach), who manages the place with its tenuous link to coke dealers and gangsters, to irritable line vet Tina (Liza Colón-Zayas) and affable maintenance guy Fak (co-producer and celebrity chef Matty Matheson) But with the help of a new hire, the intensely overqualified and ambitious Sydney (Ayo Edibiri), Carmy may well have a shot at turning the place around — if they can survive the dinner rush.

Full Hands In, Full Hands Out: For all the high-tension drama of the Gordon Ramsay “IT’S FUCKING RAW!” school of restaurant cooking, it’s frankly surprising that not a lot of narrative series have built stories out of them. Sure, there are your MasterChefs and your Hell’s Kitchens, but there are deceptively few stories about the tightrope act of running a restaurant that don’t fall into the realm of “reality” TV.

But for FX’s latest series, The Bear, showrunners and directors Christopher Storer (Ramy) and Joanna Calo (Hacks) sieve the tale of the talented but temperamental chef through a mournful tale of grief and cycles of familial trauma, and the results are surprisingly delectable, if a bit uneven.

Right from the start, The Bear clearly establishes a visual and narrative kinship with another FX series, Atlanta (fitting, since Hiro Murai is a producer here). Fits of surrealism are peppered throughout — in the opening minutes, Carmy dreams about setting a caged bear loose on a bridge along the Chicago River — while Storer and Calo’s camera otherwise emulates Murai’s tonally-liberated direction. 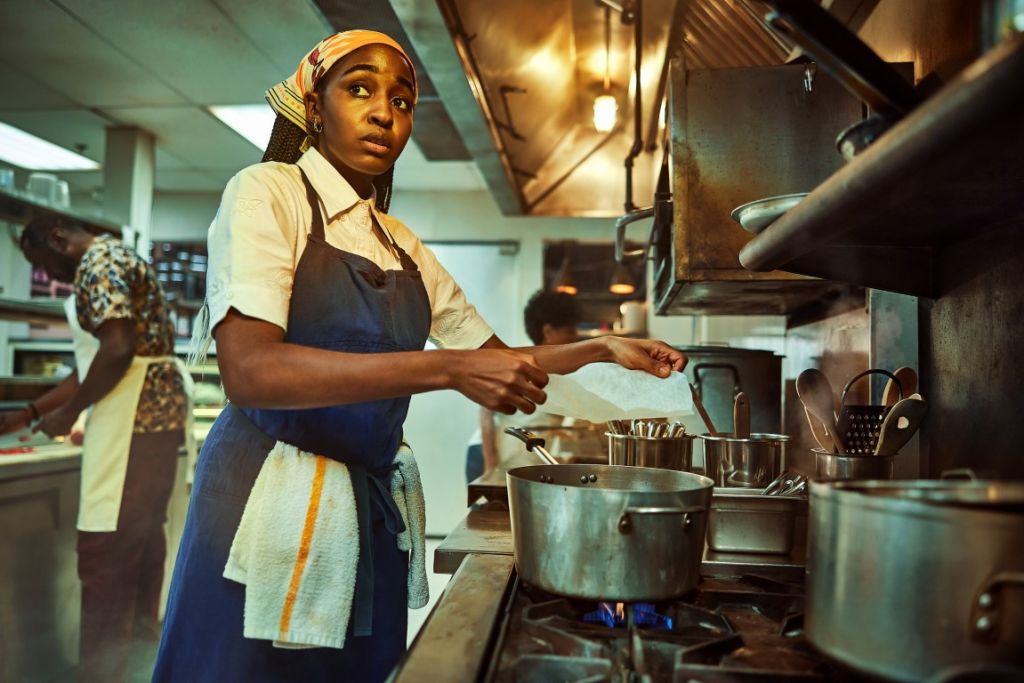 Family Meal: What’s most notable about this food show is that the Beef (as we’ll call it) is hardly the Michelin-star setting we’ve seen in other stories like this; the place is dirty, grimy, held together with duct tape and dishrags stuffed in holes. Their clientele is construction workers and bachelor parties, and turf wars play out outside their doors more often than you’d think.

They’re more terrified of health inspectors than Bob Belcher, and rightly so; what’s more, Carmy’s brother left the place in disarray, with an undisciplined staff and more than a few surprise debts from some unscrupulous characters. (As someone who paid their dues in a college-town restaurant far more like this than the Zagat-friendly gourmets we typically see on TV, hearing the codes and cries of “hands!” and “behind!” and the calming ritual of family meal rang extremely true.)

And yet, there’s the hope, mad that it is, that Carmy can not only turn things around, but elevate the menu and its clientele into something profitable and, dare we say, respectable. It’s these stretches, with Carmy trying desperately to pull the whole operation together, that comprise The Bear‘s most delicious moments. Yes, tensions run high: Richie thinks Carmy’s French-brigade-style operations are pretentious nonsense, while Sydney (a formally-trained chef reeling from the shuttering of her catering business) thinks they should be pushing the standards even further.

But then you get to see Sydney gradually earning Tina’s respect in the kitchen, or baker Marcus (Lionel Boyce) taking inspiration from them to up his own game, and something as ribald and grisly as The Bear becomes downright sentimental. Chefs spit acid across the line, and tensions run hot, but it’s balanced out by an unexpected ribbon of sweetness — the underdog hope that these dysfunctional cooks will come together and become a family. 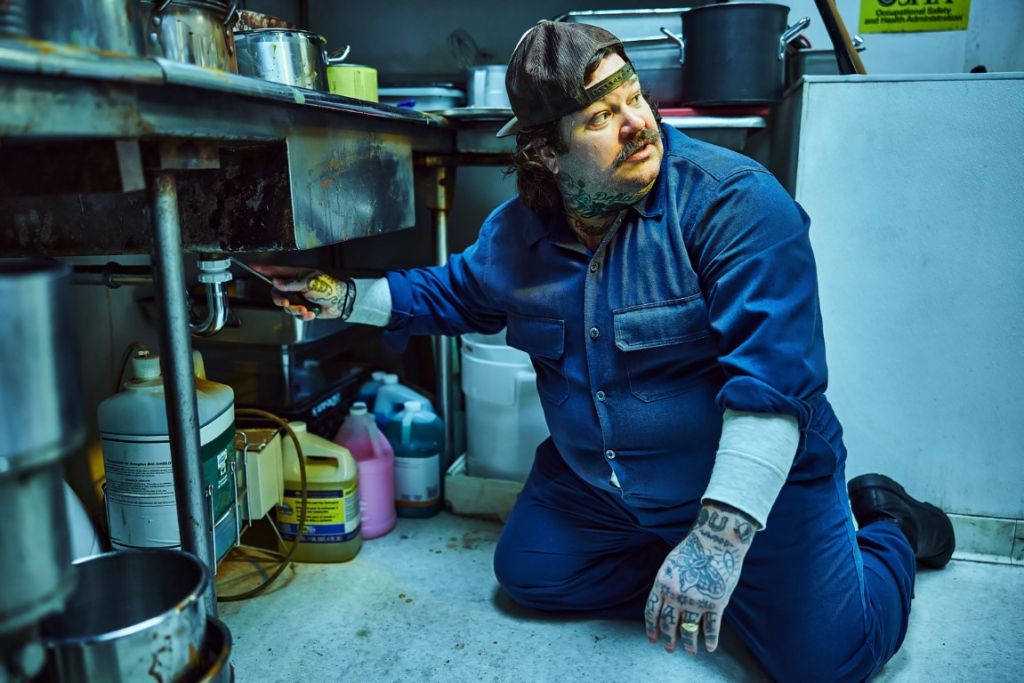 Michelin Impossible — Roast Protocol: The cast, at least around the restaurant itself, fires on all burners. White carries over his chip-on-the-shoulder desperation from Shameless well to the self-destructive ambition Carmy carries with him, fixing the restaurant being a clear metaphor for repairing both his own confidence as a chef and the broken connection with his late brother. His clashes with Richie, played with suitable Chicaaaahgo drawl by Moss-Bachrach, are more than bickering over food prices and unreasonable upgrades to the dessert menu; they’re about who deserves to drive their late family member’s mission forward.

Edibiri’s Sydney is the angel on Carmy’s shoulder to Richie’s devil, the one arguing for a better way without the loud voice to make herself heard. Boyce’s Marcus is as sweet as his glisteningly-frosted donuts, the soul of the kitchen. And, of course, there’s Matheson, who brings the deafening, Jack Black-ian bluster that made him YouTube famous to a surprisingly effective comic turn. (His spats with Moss-Bachrach are worth the price of admission alone.)

86 Subtlety: But for all The Bear‘s strengths, it suffers from a few frustrating blind spots that keep it from hitting three Michelin stars. For such a Chicago-centric show, you don’t get much of a feel for the city itself: Much of the drama is centered around its restaurant, with far too few peeks outside its walls apart from some trips to the suburbs to entertain the family of a wealthy benefactor.

Also, sometimes, the show’s flirtations with the surreal feel overly mannered; for every twenty-minute episode shot in one take during a particularly stressful day at the restaurant, there are on-the-nose moments like the aforementioned bear dream, or a Mr. Robot-like detour into one of Carmy’s breakdowns, envisioned like a chipper daytime cooking show. And some late-season contrivances feel like pure plot mechanisms designed to keep the underdogs fighting for one more day, when most restaurants of its type would have folded long ago.

The show also doesn’t quite know what to do with Carmy’s sister Sugar (Abby Elliott), the pragmatic one of the family who pipes in on occasion for the intermittent pep talk and little else. Really, the value she provides is her preppy, idiot husband Pete (Chris Witaske), whose awkward attempts to cheerlead Carmy’s efforts are some of the season’s highlights.

The Verdict: Despite its eight-episode first season falling frustratingly into the tropes of the volatile, violent kitchen and the Genius Chef tasked with keeping it all together, The Bear manages to elevate its product with some strong performances and a deep well of relatable anguish in its characters. Yes, Carmy shouts and throws things and blows up at chefs who aren’t paying enough attention, but unlike with Gordon, the show never lets us think he deserves to because He Knows Best. In fact, as you move through each course of the meal the show has put in front of you, it ends on some deceptively sweet notes.

Chicago Chefs Cook Through the Pain in FX's Bittersweet Dramedy The Bear: Review