Cliffhangers rule The Umbrella Academy. Every season, including the just-premiered third, of Netflix’s adaptation of Gerard Way and Gabriel Bá’s comic book series has ended with the status quo being shaken up more than it already has. And Season 2 ended with a particularly intriguing move: The Hargreeves, a dysfunctional family of adopted super-siblings, returned to the present from 1960s Dallas, only to find their home is no longer their home. Instead, Reginald Hargreeves adopted a different group of children with special powers (including original Umbrella Ben) for what’s now known as “The Sparrow Academy.”

But a different sort of lingering question about the show’s direction arose between the second and third seasons. Elliot Page, a member of the main ensemble, came out as trans in December 2020. Then, a few months before the show’s third season premiered, fans were introduced to Viktor Hargreeves via Twitter. The show was seemingly going to have Page’s character coming out and transitioning — how and when was a mystery.

The worst-case scenario would be that the show would play one of its many sci-fi cards at the wrong time and have Viktor be the product of some kind of black hole overreach. The Umbrella Academy is a pointedly ungrounded show, a world of time-traveling briefcases and humanoid chimps. But handling this matter like that would feel unacceptably flippant.

The other concern was that the show might lean too much into its earnest side and treat Viktor’s coming out with a reverence bordering on othering. Narratives portraying trans people (or really any marginalized group) as being on some kind of higher plane of ability aren’t empowering; they’re infantilizing.

This is complicated by Viktor as a character actually being on a higher plane of ability, through his powers of sound manipulation and beyond. How can a show whose characters are, by definition, extraordinary, reveal something so essential about one without succumbing to cheap dramatic fodder? Would Viktor’s revelation become “A Very Special Episode of The Umbrella Academy,” one where the show temporarily stops being itself so it has a better chance of winning a GLAAD Media Award?

Thankfully, the show finds a way to acknowledge this momentous change without feeling exploitative. In Season 3, after entering a barbershop and emerging with a shorter haircut, Viktor introduces himself to his family. First to Klaus, Diego, and Number Five, then later to Allison and Luther. Some of these conversations are more heartfelt than others. But all of Viktor’s siblings are accepting of their brother, and the show continues in its plot-driven ways. After all, it makes total sense that characters in a show centered around a constant threat of doomsday wouldn’t dwell too much on their siblings’ gender.

Viktor comes out in the second episode of the season, and his transition comes up later in the season in organic, non-patronizing ways: The biggest being lunkheaded-but-kindhearted brother Luther asking him to be his best man at his wedding and Viktor joining his brothers for a karaoke rendition of “(I’ve Had) The Time of My Life” at Luther’s bachelor party. These moments clearly aim to tug on the heartstrings, but they’re contained to the show’s most sentimental episode to date, and they possess a warmth that’s hard to resist. 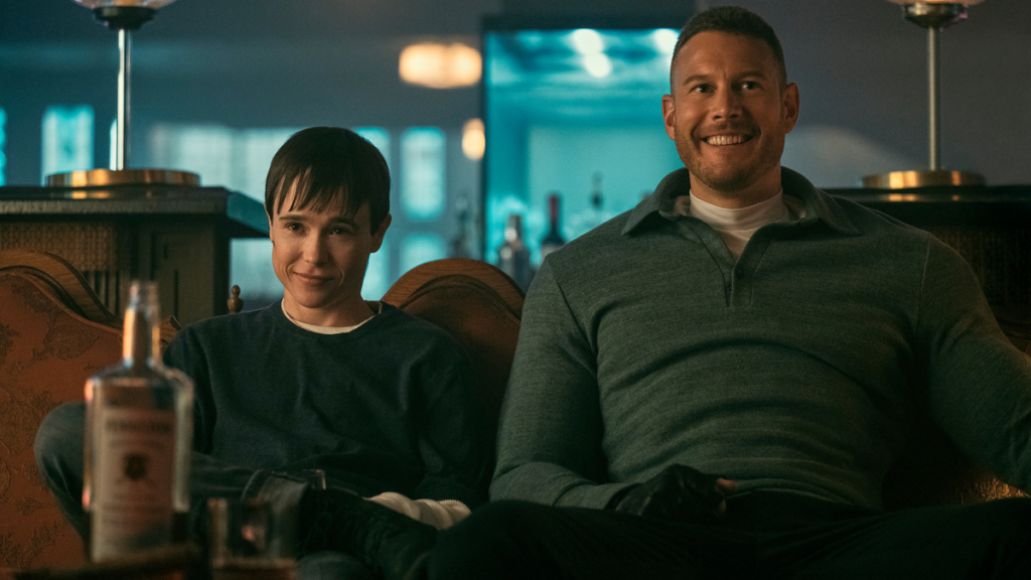 Page’s character in the first two seasons technically isn’t meant to be seen as transgender. But considering how much art mimics the trans experience through unintentional parallels and metaphors, it doesn’t seem unfair to see the first two seasons, retroactively, as essential chapters in a book of self-discovery and acceptance. In fact, it seems impossible to see it any other way, for a variety of reasons.

To begin, there’s the fact of Page himself being trans. Page has expressed lifelong feelings of dysphoria, saying he knew himself to be a boy since he was a toddler. This awareness of Page’s awareness casts all of his previous roles in a new light, but most especially for The Umbrella Academy: It’s unclear how much Page’s internal feelings impacted how he embodied the character, but one would assume it was to a not-insubstantial degree.

This is intensified by Viktor Hargreeves’ arc inherently feeling like a trans allegory in the context of the series. When we first meet Viktor in Season 1, we learn that he’s the black sheep of his family of siblings, all born at the same time under mysterious circumstances; he has seemingly no powers. But he soon learns of his true potential, which had been suppressed by his cruel adoptive father Reginald, out of fear of what devastation those powers could cause.

It’s not the perfect metaphor, especially not when the discovery of his powers leads to chaos on an apocalyptic scale. Nonetheless, Viktor’s arc, more than any other character, has been about coming into himself, and numerous moments are now brimming with subtext. In one Season 2 episode, Reginald urges Viktor to stop denying his true self — someone, either aware or unaware of Page’s transition, could watch that scene and not get any trans connotations from it. But once the mental connection has been made, there’s really no undoing it.

The aforementioned scene between Reginald and Viktor serves as a pretty solid representation of the internal conflict of grappling with the truth of one’s trans identity. Uplifting and respectful stories about trans characters are so hard to come by in popular entertainment that it’s easy to latch onto allegory. Any number of surface-level hero’s journey fiction can take on a deeper meaning for anyone who finds it. This isn’t limited to trans-related matters, of course, but once you start considering media through this lens, it’s incredible to realize just how omnipresent they are and how well they illustrate certain concepts. 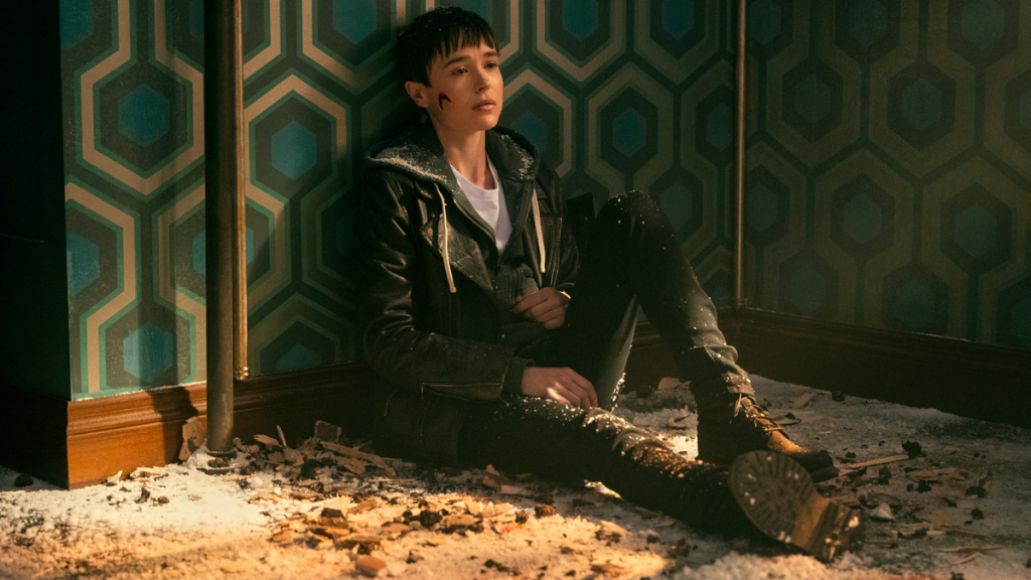 It’s not a perfect analogy, but the perfect analogy doesn’t exist, nor does it need to. Even if nothing said by or about Viktor in previous seasons served as an obvious metaphor for dysphoria, it wouldn’t change who he is. And if Page’s character was never acknowledged as being trans, these moments would likely still resonate with viewers who are. That The Umbrella Academy happened to have an actor playing a character with many trans connotations come out as trans is a bit of a happy accident. But it shouldn’t diminish the significance of people finding these parallels in all kinds of stories.

The show’s success in portraying Viktor’s transition is less about making the right moves and more about avoiding the wrong ones. Season 3 itself is transitional in the sense of the creators and Page feeling out how Viktor fits into the show’s ever-changing world — he continues to play a major part in the show, but his trans identity isn’t emphasized all that much, at least not explicitly. Certainly, one could read something into moments like Allison angrily telling Viktor that their family is “so worried about fixing [his] pain” compared to hers. But that’s also a moment that could be read on its own terms and potentially exist in any of the previous seasons.

Trans representation in media has a long way to go.  But it’s at least improved to the point where a character on a show as popular as The Umbrella Academy can A) come out as trans, B) be played by a trans actor, and C) not be reduced to this one characteristic.

While future seasons will hopefully find ways to delve further into this aspect of Viktor in meaningful ways, Season 3 lays down an admirable foundation for them to build off. Viktor’s arc isn’t meant to speak for all trans people, male or otherwise. But by portraying his journey in a way that feels truthful to both the character and the experiences of real-life trans people, it shows that addressing this subject matter is only as difficult as one makes it.

The Umbrella Academy Season 3 is streaming now on Netflix.