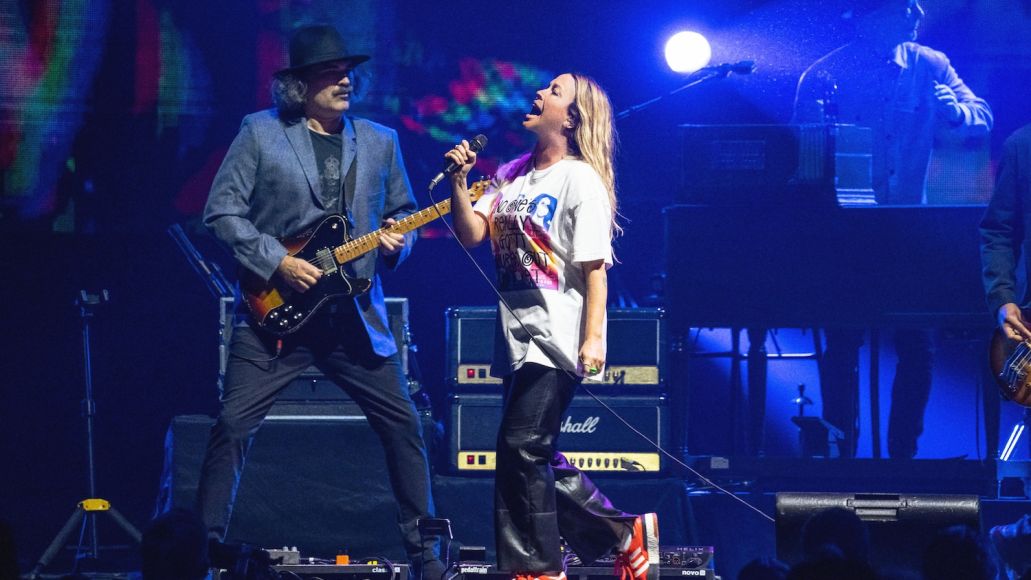 The new songs were mostly limited to quick segues, although she did play Such Pretty Forks in the Road single “Reasons I Drink,” which had a few too many overdubs compared to the rest. She also brought out the sweet and heartfelt “Ablaze,” which updates the letter-writing lyrics of Supposed Former Infatuation Junkie’s “Unsent” to be for her children. In between those cuts was another Jagged Little Pill standard, “Head Over Feet”; Morissette’s harmonica playing was met with adulation from the crowd every time.

Following Jagged trio “Perfect,” “Wake Up,” and “Not the Doctor,” Morissette dedicated her performance of audience favorite “Ironic” to late Foo Fighters drummer Taylor Hawkins, who was in Morissette’s band before joining the rock group in 1997. Hawkins figured prominently in the aforementioned tour video of “You Learn,” and clips from that footage were shown during “Ironic,” along with some highway shots from the song’s own memorable video.

Morissette and her backing quintet closed the pre-encore portion of the night with a fiery take on “You Oughta Know,” complete with a video of a burning car in the background. (Feel free to speculate on the owner of the car in the same way people speculated on the subject of the song in 1995.)

With Jagged Little Pill fully accounted for, she delivered some curveballs for the encore, starting with hidden bonus track “Your House.” Best known for its appearance from her MTV Unplugged album (hidden bonus tracks? Unplugged? Could this paragraph date itself any harder?), “Uninvited” gave additional low-end thump to proceedings, and while 1998’s Supposed Former Infatuation Junkie was otherwise mostly ignored early on in the night (minus a blip of “Sympathetic Character”), it made for a rousing finale with “Thank U.”

More than a quarter century after her groundbreaking work, Morissette’s regained arena status is well-earned. She’ll never escape Jagged Little Pill in the way Boston will never escape Boston or The Cars will never escape their hit-laden eponymous debut, but it’s less an indictment of the rest of her work and more an acknowledgment that such a seismic event was destined to never repeat. To her credit, Morissette has had fun with it, dropping 20th and 25th anniversary reissues, recording an acoustic version, and even adapting it into a Tony Award-winning musical (which closed far too soon due to Omicron).

The album’s enduring influence now spans two generations, as the Avril Lavignes/Kelly Clarksons that cited it as an inspiration have now given way to the Olivia Rodrigos/Gayles. Morissette’s latest tour is no mere blast from the past, it’s a reminder⁠ — if one was even needed⁠ — that Jagged Little Pill is a timeless classic. If you need more proof, get tickets to the rest of the tour via Ticketmaster.

Setlist:
All I Really Want
Hand in My Pocket
Right Through You
You Learn
Hands Clean (snippet)
Forgiven
Everything (snippet)
Mary Jane
Diagnosis (snippet)
Reasons I Drink
Head Over Feet
So Unsexy (snippet)
Ablaze
Nemesis (snippet)
Perfect
Losing the Plot (snippet)
Wake Up
Not the Doctor
Ironic
Smiling
I Remain
You Oughta Know
Encore
Your House
Uninvited
Thank U