The legendary Circle Jerks finally made their way to New York City on Thursday night (July 7th) for a two-night stand at Irving Plaza following a number of pandemic-related postponements. The pioneering hardcore-punk band more than made up for the delay, delivering a 33-song set while headlining a bill that featured fellow veteran acts 7Seconds and Negative Approach.

Originally, Circle Jerks had planned to hit the road in 2020 to celebrate the 40th anniversary of their iconic debut album, Group Sex. After playing a smattering of shows in 2021, the band kicked off a proper North American run in February, only to have it curtailed when frontman Keith Morris contracted COVID, forcing the postponement of the remainder of the tour, including the NYC dates.

In addition to founding Circle Jerks, Morris is also the original lead singer of Black Flag, making him one of the most important figures in hardcore music. The band also features guitarist and fellow founding member Greg Hetson, longtime bassist Zander Schloss, and drummer Joey Castillo (of Queens of the Stone Age fame).

Thankfully, nothing got in the way of Thursday night’s makeup date, with Circle Jerks now celebrating the 40th anniversary of sophomore album, Wild in the Streets, as well.

The 33 songs included 13 of the 14 tracks from Group Sex, and six songs from Wild in the Streets. Morris was in a particularly chatty mood, telling fun stories about the band and offering scathing commentary on the state of the world in between blocks of songs.

Even with the extensive setlist and the onstage banter, the show clocked in at a tight hour and 15 minutes. After all, most Circle Jerks songs come in at under two minutes, with some not even reaching the one-minute mark.

Prior to Circle Jerks’ set, 7Seconds, who’ve also been around for more than 40 years, served up a bounty of hardcore tunes with anthemic choruses, many from their classic 1984 album The Crew. Frontman Kevin Seconds and company ended their show with a rousing cover of the Nena pop hit “99 Red Balloons,” offering a festive closing to their 45-minute set.

Opening the evening was Negative Approach, yet another band that formed more than 40 years ago. With a permanent scowl on his face, singer John Brannon spewed out his scorching lyrics with a crushing scream, piling 22 songs into 35 minutes.

The venue filled up with fans early on, with a steady pit going from Negative Approach’s opening number, “Hypocrite,” to Circle Jerks’ closing tune, “Question Authority.” It was a night of legendary hardcore that was a long time in the making, and, after numerous delays, it all went off without a hitch.

Circle Jerks’ headlining North American tour continues through a two-night stand in Austin, Texas, on September 5th and 6th. Pick up tickets via Ticketmaster, and see our photos and fan-filmed video from the NYC show below. 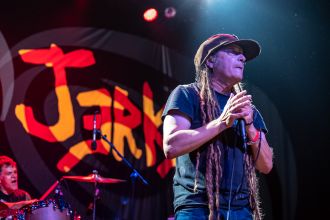 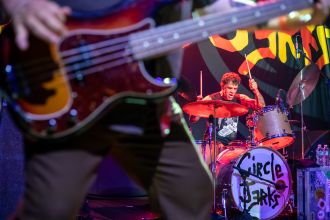 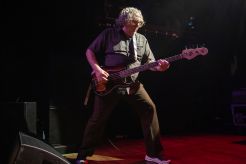 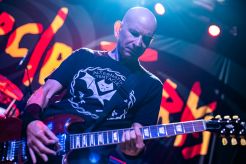 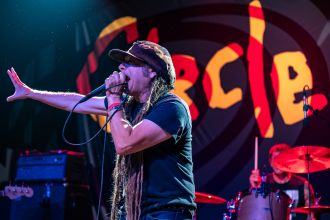 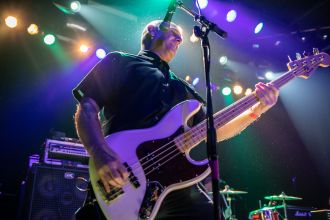 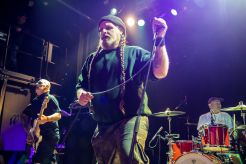 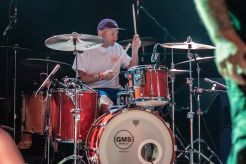 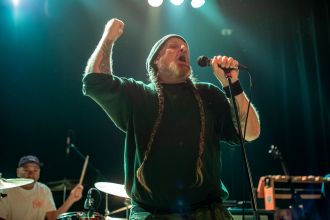 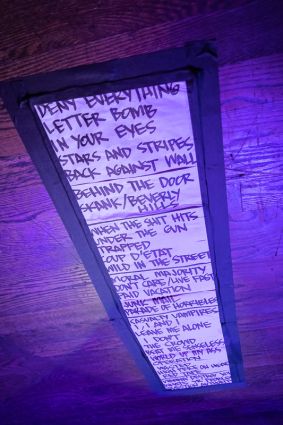 Circle Jerks Setlist:
Deny Everything
Letterbomb
In Your Eyes
Stars and Stripes
Back Against the Wall
Behind the Door
I Just Want Some Skank
Beverly Hills
When the Shit Hits the Fan
Under the Gun
Trapped
Coup d’état
Wild in the Streets
Moral Majority
Don’t Care
Live Fast Die Young
Paid Vacation
Junk Mail
Parade of the Horribles
Casualty Vampire
I, I & I
Leave Me Alone
I Don’t
The Crowd
Beat Me Senseless
World Up My Ass
Operation
Wasted
High Price on Our Heads
Red Tape
Encore:
I Wanna Destroy You
What’s Your Problem
Question Authority