The Pitch: In comparison to the tightly structured and interconnected monolith that is the Marvel Cinematic Universe, the world of DC Comics characters on screen is a complicated and chaotic place, with the films and the TV shows operating within their own separate continuities (except when they don’t). Perhaps that’s why the narratives which have thrived creatively over the years have been the ones centered around its most chaotic characters, from Birds of Prey to DC’s Legends of Tomorrow, and amongst all of them, Harley Quinn might be DC’s greatest on-screen achievement.

The animated series, first launched in 2019 as one of the flagship shows of DC Universe, was instantly special from the beginning, delivering a riotously funny, irreverent, silly, violent, and surprisingly heartfelt take on its titular protagonist, originally introduced in Batman: The Animated Series as a sidekick to the Joker. And when the WarnerMedia team finally figured out that maybe a new hyper-niche streaming platform wasn’t the best place to put instantly special original streaming series, the series was not only made available on HBO Max, but a new season was greenlit. And please, let this be just the beginning.

Let the Eat. Bang! Kill Tour Begin! Harley Quinn Season 3 brings it just as hard as the past two seasons, with a renewed passion for exploring all the weirdest nooks and crannies of its characters. Season 2 of Harley Quinn, if it’s been a while, ended with Harley (Kaley Cuoco) saving Poison Ivy (Lake Bell) from her own wedding to Kite Man (Kite Man), the two of them finally embracing their love for each other and literally driving off into the sunset.

Of course, saying you’re in love is easy. Being in love — while also trying to honor your own passions and responsibilities — is tough. And that’s essentially the theme of Season 3, as Harley tries to support Ivy’s exploration of her supervillain ambitions, even as Harley herself starts questioning her own identity. This has been a fundamental part of the series from the beginning, as the Harley we first met in Season 1 was struggling to define herself outside of her relationship with the Joker, and the sensitivity and nuance which the writers bring to her journey is a huge factor in the show’s success.

Which is to say that even if the show didn’t include some of today’s most hilarious and inspired meta-commentary on pop culture, not to mention some gloriously dumb and silly gags, it would still be compelling. The fact that we get the meta-commentary, the silly gags, and the compelling emotional narratives is pure chef’s kiss.

Harley and Ivy Take Over the Fucking World: Perhaps one of the best bits of subtle advertising Harley Quinn got was when executive producer Justin Halpern told Variety that the third season was meant to feature “a moment where Batman was going down on Catwoman. And DC was like, ‘You can’t do that. You absolutely cannot do that.'”

Beyond the DJ Khaled jokes, this reveal pointed to something you might not have realized about Harley Quinn — it could go further than it does. Which makes every incredibly niche poke at the DCEU they do get away with feel all the more delicious. See, for instance, a running bit about adding a CGI mustache to a character which has its clear inspiration point in the kerfuffle surrounding Justice League’s facial follicle issues, or literally a dozen other not-so-subtle digs at the broader cinematic universe. 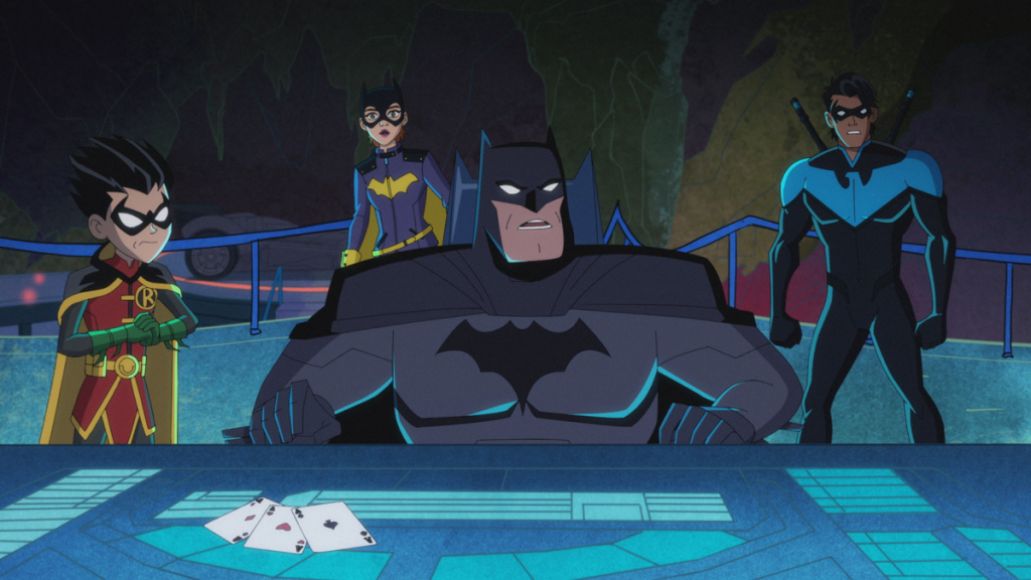 (And if you’re wondering whether or not you’ll be able to guess when that Batman and Catwoman moment might have been meant to happen, do not fear — the changes made by the producers to keep things a little more PG are so transparent that you’ll be able to figure it out instantly, adding a whole extra subversive edge. They want us to know. Bless them for it.)

Damn This Voice Cast Is Good: In addition to Cuoco and Bell as the show’s enduringly solid anchors, the casting for the show remains next level, bringing in a wonderfully diverse and wild collection of actors including returning all-stars like Alan Tudyk, Ron Funches, Adam Daly, and Sanaa Lathan — and there are some strong new additions, including What We Do in the Shadows star Harvey Guillén as Nightwing, Sam Richardson as Swamp Thing, and James Gunn as himself. There’s also another “as himself” in the mix which is too good to spoil, and Rachel Dratch returns as Nora Fries in a big way.

What stands out about the casting is that it’s filled with choices that might not have seemed the most obvious on paper — as just one example, Dietrich Bader, best known for decades from his sitcom work, has proven himself as a standout Batman/Bruce Wayne, able to infuse the show’s signature humor into his portrayal as the ultra-serious crimefighter. Guillén and Richardson also prove their abilities to play all the different ranges of the characters.

The Verdict: The fact that Harley Quinn Season 3 exists is a quiet sort of TV miracle — a TV show so good that it was able to survive the death of its original streaming service. If the show was just nonstop goofs on Batman and his rogues’ gallery, it wouldn’t be as resonant, but by exploring the murkiness of who’s a hero and who’s a villain in the context of the anarchy that is Harley Quinn’s Gotham, while centering so much of the action around its core love story, the show hits a whole other level.

I’ll end like this: Earlier this year, for Consequence, I wrote an article about how Batman stories on screen have a bad habit of overemphasizing Bruce Wayne’s origin story, and Halpern himself happened to see it, tweeting the below:

No spoilers for this episode, but Halpern was 100% correct on this matter. Harley Quinn is a gift. I can’t wait for you all to watch it.