“It was Hope that was kept in the innermost nook of the box. It trailed behind the miasma of darkness, assuaging the ill effects on humankind. Hope gave people the will to keep on living amidst the pain and strife.”

The introduction of j-hope’s full-length debut solo album, Jack in the Box, is a female voice recounting the myth of Pandora’s Box; it’s a story j-hope, who was born Jeong Hoseok, has long gravitated towards, and a partial source of his stage name.

For nearly a decade now as part of BTS, j-hope has more than lived up to the name. He’s embodied it — epitomized it, even — by developing a reputation as the ray of sunshine in the global, record-smashing group. His energy onstage is astounding; anyone who is lucky enough to have seen BTS in concert inevitably walks away amazed by the seemingly endless well of passion and precision he possesses as the dance leader of the group.

“My name is my life,” is the opening line of j-hope’s 2018 mixtape, Hope World, a seven-track, neon-soaked collection of bright beats and optimism. Even recently, BTS’s label BIG HIT MUSIC shared behind the scenes footage of the group preparing for their performance at the 2022 Grammy Awards. Multiple members fell sick with COVID during the rehearsal process — j-hope among them — and when he finally returns to the practice room, there’s visible relief among his members. “Now that Hobi is here, everything is falling into place,” Jimin says. “Don’t be sick, for my sake — my life is harder without you.”

With familiarity often comes expectations, though, and after ten years, j-hope has made it clear that he has been itching for a different lens through which he can explore his creative identity. It’s arrived today, July 15th, in the form of Jack in the Box, the first full-length solo album from any of the members of BTS, and we are decidedly no longer in Hope World.

”I Want Some More”

The streaming press preview for Jack in the Box was accompanied by a note from the artist kindly requesting the listener play the album in order. j-hope shares that his goal was for the project to “flow like a well-written book,” and that’s a front on which he succeeds.

The tracks glide from one into the next with the same smoothness j-hope possesses as a dancer. The structure of the LP recalls the Hero’s journey, the mythical framework so many stories follow to this day. In the beginning of the album, there’s definite unrest in tracks like “Pandora’s Box,” followed by a sense of conflict in “MORE” and “STOP.”

Then, there’s a shift to feelings of triumph and brightness in the latter half of the album (the split marked by the interlude “Music Box: Reflection”). There’s an excellent three track run from “What if…,” an energetic song that samples Ol’ Dirty Bastard’s “Shimmy Shimmy Ya,” into mid-tempo standout “Safety Zone” before a touch of Hope World familiarity returns in the optimistic “Future.”

With 10 full tracks to work through, Jack in the Box certainly feels like a full-length effort, and it’s clear that j-hope took great care in organizing and structuring the project. Interestingly, though, most of the tracks fall under the three-minute mark, with “MORE” being the longest song on the project at three and a half minutes. It’s his own work through and through, though, devoid of any features or collaborations.

In true j-hope fashion, even the songs with darker sonic landscapes are often betrayed by a hopeful message in the lyrics. One of the great joys of a BTS album is the many listening experiences offered therein: A first pass can be entirely focused on the sound and energy of a project, with a second listen dedicated to the lyrical journey. “STOP,” for example, with its gritty, minimalist vibe, is centered on the idea that “there are no bad people in the world.”

Put Out the Fire or Burn Brighter?

BTS fans won’t be surprised that much of the album is dominated by raw beats and production touches that feel pulled from the ‘90s, a decade with sounds and aesthetics j-hope tends to gravitate towards. While Jack in the Box is still a major departure for j-hope, he’s honed his producer’s touch in the studio over the past nine years as much as his flow as one of BTS’ rappers, to the point where everything in the album feels fine-tuned.

Recently, the music world was — perhaps a bit melodramatically — shaken by an announcement on June 13th indicating that the members of BTS would be taking time to explore solo endeavors, beginning with this album from j-hope. The members have since adamantly clarified that they are far from broken up, and wouldn’t even consider this time period a hiatus — but, even so, there’s a certain amount of pressure on j-hope as the first member to share his solo project. Jack in the Box is a major creative risk for j-hope, playing against type and completely upending any expectation of a return to the rainbow-hued landscape developed in Hope World.

Album closer and focus track “Arson” is a true scorcher that lives up to its name. Here, j-hope is brutally honest in a way that makes it impossible not to consider the feelings of being stuck and trapped discussed by the members in the video detailing their solo plans. “Couldn’t help but go into overdrive/ Motivation behind my thoughtless ambition/ When I sweat, I shower in petrol/ To set a fire on my feet, on my legs,” he says.

The expectations on K-pop artists in general are immense; the expectations on the shoulders of anyone in BTS are almost impossible to imagine. Part of the reason so many people gravitated towards the group throughout every iteration of their career, though, is their refusal to play by the rules, rejecting the unspoken and spoken assumptions for how Korean pop artists should look, act, and communicate.

Very few artists would share their experience so openly with fans — “My dreams, done/ Success, done/ My part of the job, done,” he confesses on “Arson” — but, in the same track, j-hope also clarifies that the purple bubble of BTS and ARMY is still his landing place. “With my fans, with my label, with my fellas/ We burn bright together/ Rational accomplices… One second ahead, so fuck off.”

Thinking Outside the Box

The world is dark right now, but making this kind of observation doesn’t have to be pessimistic. Some music, like BTS’s own “Dynamite,” is perfectly escapist, providing much-needed bouts of joy in times like this. Other music is merely seeking to tell the truth.

j-hope gave himself this time to explore the darkness, but the thread running through Jack in the Box is insistent: The last thing inside the box, the one thing that doesn’t feel the need to escape, is Hope.

Jack in the Box Album Artwork: 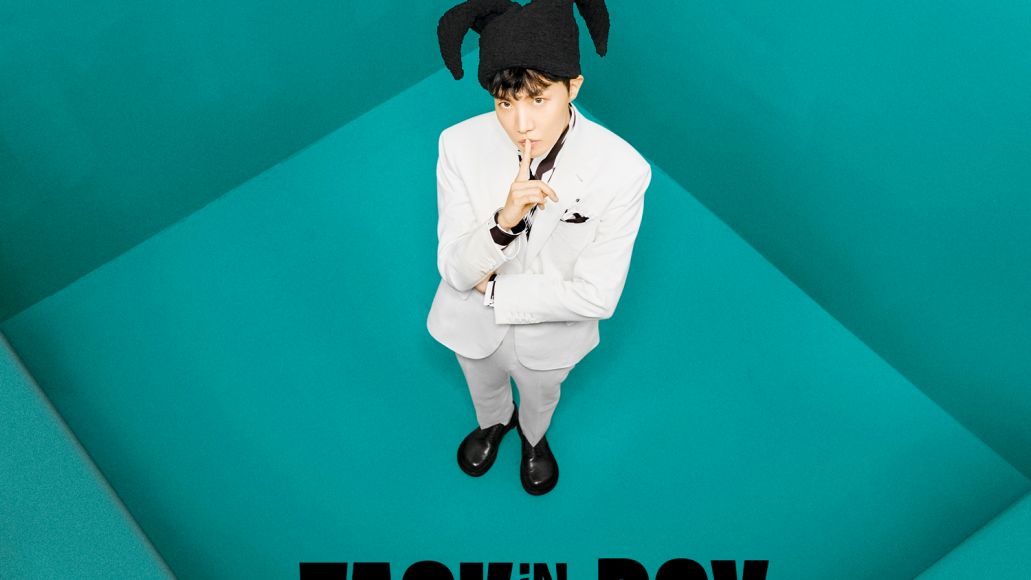 With Jack in the Box, j-hope Isn't Afraid to Embrace the Darkness