AMC’s Mad Men, during its Emmy-winning seven-season run, established a reputation for itself as a show unafraid of taking creative chances. The series jumped forward in time with abandon, often chose silence instead of explanations, and did its best to keep viewers guessing as to the 1960s hijinks of Don Draper (Jon Hamm) and his fellow advertising executives. But one of its boldest swerves came at the very end of the pilot, a short sequence that proves seismic for the series, or at least our understanding of its lead protagonist.

We’ve followed Don for a full 24 hours of his life, from a frustrated brainstorming session at a Manhattan bar to a late-night rendezvous at the apartment of his bohemian lover Midge (Rosemary DeWitt) to the offices of Sterling Cooper. We’ve watched him change his shirt and meet his new secretary Peggy (Elisabeth Moss) and spar with his obnoxious office rival Pete (Vincent Kartheiser). We’ve watched him both flounder and soar in different meetings with different clients, coming up with a brilliant ad strategy for Lucky Strike Cigarettes and use his charms to win back the Jewish department store manager (Maggie Siff) he’d alienated earlier that day.

We’ve gotten what feels like a full picture of this suave and debonair man-about-town, as his day ends. And then it turns out that the sumbitch is a married father of two.

Don Draper’s wordless return from the city to his suburban home ends with him greeting his dozing wife Betty (January Jones) and then going into his children’s bedroom: As creator Matthew Weiner writes in the pilot script, “Don has a hand on each of their heads as they sleep. He looks up to the doorway where Betty now leans in her peignoir, smiling at the scene of domestic bliss.” 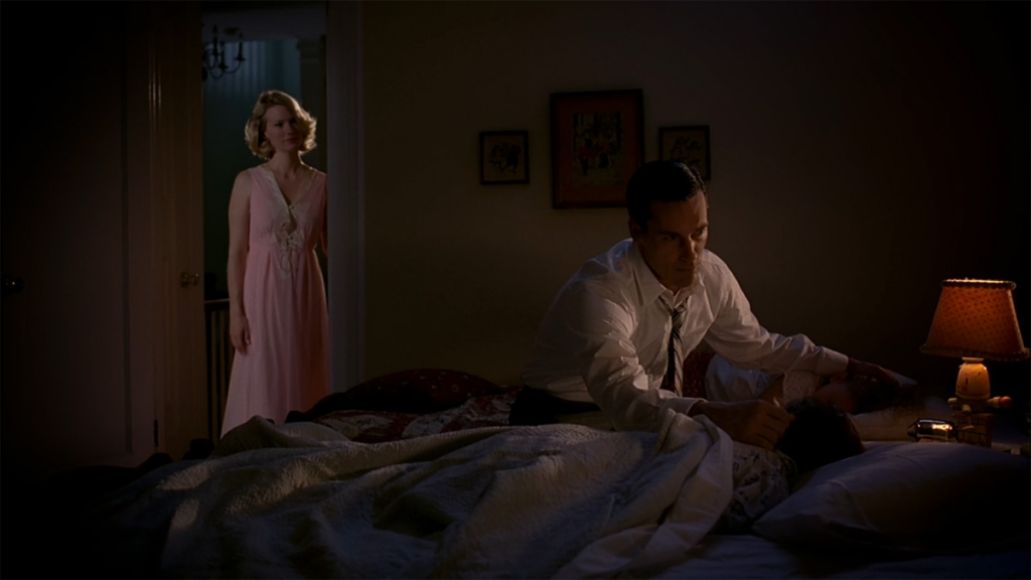