The Pitch: In the rolling hilly countryside outside Los Angeles city limits, the Haywoods — descended from the first Black horserider/stuntman/movie star to ever be captured in motion — try to make ends meet as Hollywood horse wranglers. But when the family patriarch (Keith David, radiant as always) dies from a freak accident, the task is left to introverted Otis Jr., or OJ (Daniel Kaluuya) to keep the family ranch afloat, with the reluctant help of his fast-talking, hustle-happy sister Emerald (Keke Palmer).

At first, they resort to selling off the family horses to nearby Jupiter’s Claim, a hokey Wild West-themed amusement park run by former child star Ricky (Steven Yeun). But fortunes start to change when they realize there’s something above them, in the clouds, scaring the horses and shutting off the power whenever it passes. If they can just get the perfect shot of whatever it is — the “Oprah shot,” as they say — they’ll be rich and famous beyond their wildest dreams. Should be easy, right?

Everyone Has Their Own Story to Tell: If there’s one thing to appreciate about Jordan Peele’s output as a filmmaker — apart from the expert craft, performances, the beating core of artistic integrity that underlies every frame — it’s that he is, first and foremost, a student of cinema.

Get Out, as much as it was a killer horror pastiche that changed the landscape for Black horror, reflected on the horror cinema of the past and Black people’s participation in it, on both sides of the screen. Us was a knowing, winking throwback to The Twilight Zone, Invasion of the Body Snatchers, and a host of other high-concept ’70s social thrillers. Now, three years and an incredibly cryptic marketing campaign later, we have Nope, Peele’s biggest, messiest, and most cinematically-literate entry yet.

If we’re to make the inevitable comparison to M. Night Shyamalan, another mainstream genre auteur whose films feel like the singular product of one person and their influences, Nope is undoubtedly Peele’s Signs: more than the “it’s aliens!!” angle, it’s equally ambitious and chock-a-block with every narrative and thematic bugaboo its filmmaker wants to touch on.

But it still feels unmistakably Peele: The nail-biting command of tension, the creaking, groaning sound design, the unexpected bursts of humor (Palmer is the MVP, hands down, effortlessly funny and riveting, especially as she gets the focus in the film’s final minutes) are all there. It’s just bigger and more, which fits once you realize that Peele is now fully in sci-fi blockbuster mode. 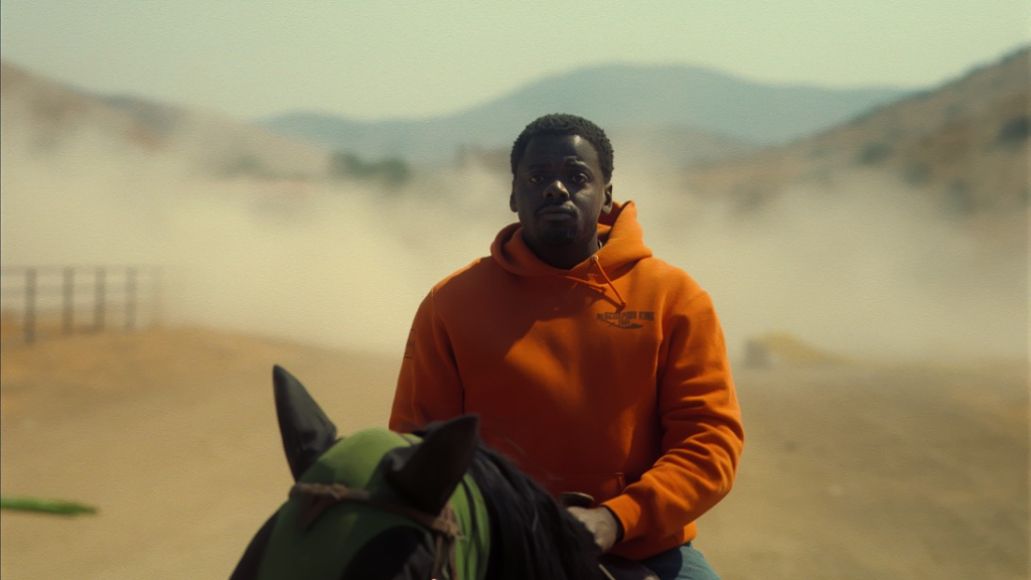 “I Guess Some Animals Ain’t Fit to Be Trained”: It starts, strangely enough, with a shoe: a blue flat standing eerily up on its tiptoe, in the middle of a blood-soaked TV set, audience bleachers empty, with a chimpanzee (Terry Notary) lounging in his little paper birthday hat. We won’t know the provenance of these images for a good while yet, but Peele tips his hand with a Bible quote at the top — Nahum 3:6, “I will cast abominable filth upon you, Make you vile, And make you a spectacle.”

Nope, whether it’s about the Haywood horses, the chimp, or the thing in the sky our heroes are desperate to survive and profit from, is just as much about the folly of man trying to conquer the primal nature of beasts. Look ’em in the eye, and they might kick you; but if you pull it off, you’ve won over nature. It’s the thing that binds all of our characters — the spectacle that we’re drawn to and repulsed by, and the thing that can swallow us whole if we’re not looking.

They Shoot Horses, Don’t They?: It’s borderline impossible to touch on all of the cinematic signposts Peele lays down here, as Nope swims in a sea of homage. Of course, there are the overt nods to cinema history: our characters work in the margins of Hollywood after all, literal descendants of the Black artists and creatives who helped build the town, only to be given crumbs in return.

The Haywoods, with their ranch and the accompanying images of Kaluuya on horseback (and posters of Black Westerns like Buck and the Preacher adorning their home), alongside Yeun as an Asian cowboy complete with spangly outfit, feel reclamative of the Western and its rhythms in ways that feel subtle but powerful. The middle act, as the Haywoods and their tight-knit group of hangers-on (including Brandon Perea as a tech-support guy who gets overly invested in their search after he figures out what all these cameras he’s installing at their ranch are for, and Michael Wincott’s genius cinematographer who’s long sought “the impossible shot”) try to suss out the nature of what they’re chasing, is an incredible showcase of Peele’s horror prowess. 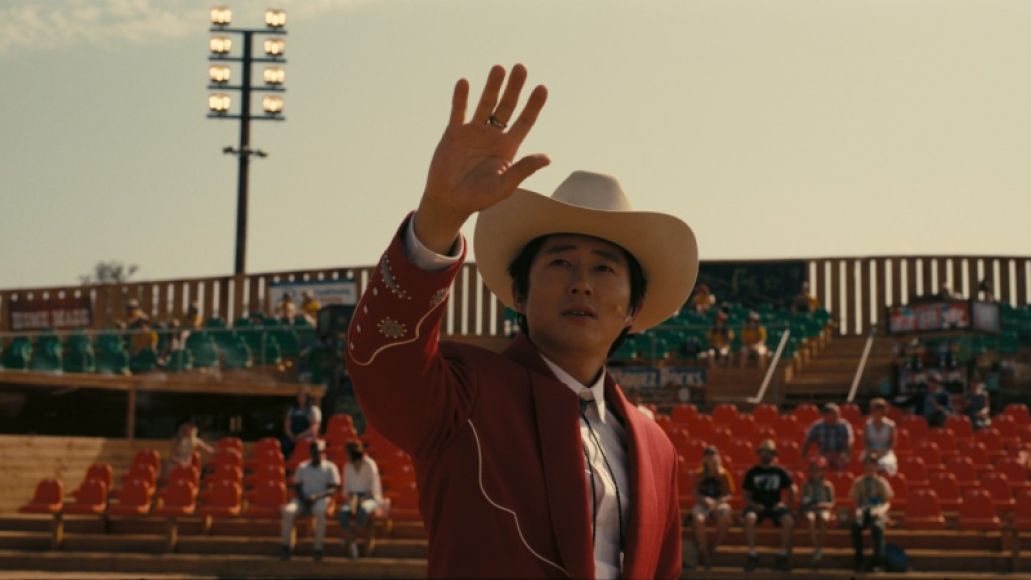 Hoyte van Hoytema’s expansive cinematography, IMAX cameras soaking in every arid inch of the Agua Dulce desert, is a treat to behold. That especially comes into play in the film’s climax, where Peele gamely chucks the eerie, atmospheric nighttime horror of the first two acts for a rootin’-tootin’ execution of a Big Damn Plan that evokes nothing less than the creature-feature delights of Spielberg’s Jaws, with Wincott as Quint, Kaluuya/Palmer as Brody, and Perea as Hooper making plans and improvising when the plans inevitably go tits-up. Michael Abels’ score ushers us capably between these modes too, teasing us with strained, minimalist strings before going full, galloping Western adventure in that fist-pumping final stretch.

The Verdict: Some may bristle at Nope’s thematic caterwauling, the dramatic shifts in tone, or the seismic shift in what Peele delivers compared to what we expect. But those bugs are all features, really: Peele’s made a thrilling, exciting blockbuster that also touches on the nature of spectacle, and the ways artists get chewed up and spat out (in some cases, literally) by their work. But to do that while also weaving in the rhythms of the Western, the monster movie, the alien conspiracy picture, and tales of showbiz trauma and to make it all work in his spectacular brand of maximalism? That’s something special.

Where’s It Playing? Nope shows you a bad miracle (in a good way) in theaters on July 22nd. (Catch the IMAX if you can — whoof.)