Had it not been for the pandemic, Rage Against the Machine would have kicked off their “Public Service Announcement Tour” with Run the Jewels during the presidential election cycle of 2020. However, with everything currently going on in the United States and the world, it could be argued that we need RATM more than ever in 2022. In the first of back to back shows on Monday night (July 11th) at Chicago’s United Center (just the second show of the tour), the reunited band showed that they were ready to deliver, by any means necessary.

Openers Run the Jewels knew their role in the Rage reunion, putting together a 45-minute set that incorporated their biggest tracks to date. While getting the crowd warmed up, they would be the more vocal of the acts on stage between songs, having as much fun as they could in the process. “We’re here to see Rage Against the Machine, too” said Killer Mike before they jumped into “Oh My Darling Don’t Cry.”

Chicago had a healthy contingent of RTJ fans, though, bouncing along for singles like “Ooh La La” and “Legend Has It.” They would set up the night’s headliners with “Walking in the Snow” dedicated to victims of police brutality, and the more poignant track “A Few Words for the Firing Squad” from 2020’s all-too-timely RTJ 4.

From the moment that Zack de la Rocha’s vocals for “Public Service Announcement” echoed through the arena, the nearly sold-out crowd was up and ready to get moving. The band came out firing on all cylinders, with fans jostling to open up the first mosh pits of the evening. Rage sounded tight as ever, with an LED board reading “Fear Is Your Only God” illuminated over the black and white camera feed of the show.

It had been 14 years since the band had played Chicago, and it felt like they had been storing up aggression the entire time. “People of the Sun” and “Bulls on Parade” followed in quick succession, and it felt like there would be no letting up from Rage Against the Machine for the duration of their roughly 90-minute set.

Toward the end of “Bullet in the Head,” the fourth song in the set, de la Rocha landed awkwardly on stage, injuring his leg (see video below). He quickly recovered in the moment by hopping over to the drum riser to lean on it. The band finished the song before a vignette of a burning police car was pulled up on the screen. Much of the crowd didn’t seem to notice anything was amiss, until de la Rocha was helped back onto the stage with the assistance of the band’s crew, and seated at a monitor on the right side of the stage, looking visibly frustrated. Considering he was injured, it was a very short turnaround time for the band to get back out to face the fans. While it didn’t seem to be in the plans to address the crowd at all on Monday night, the frontman admitted that he was in pain.

“I don’t know what happened to my leg right now, straight up,” he told the crowd. “But you know what? We’re gonna keep this shit going, if I have to crawl across this stage. You came too fucking far. You guys ready? Let’s go.” That was the extent of his address to the Chicago faithful.

From there, Rage Against the Machine proceeded to rattle off classic after classic, seemingly not missing a beat. At one point, de la Rocha attempted to stand on his good leg against the monitor, but couldn’t muster it for long. Any frustration that he had, however, was channeled into delivering the best set possible given the circumstances, and he still proceeded to bang his head and emote as much as he could while seated. At times, Tom Morello would sit in next to him, almost in a move of solidarity. There were no audible signs of discomfort, though, with the band blasting through singles like “Testify” and “Guerrilla Radio.”

With the band’s singer hobbled, Morello filled the void at the center of the stage. He and bassist Tim Commerford played with all the intensity of the band’s younger years, each song hitting like a punch to the chest. As soon as the opening riff to “Sleep Now in the Fire” rang out with Morello in the red spotlight, both the band and the crowd took things up to another level, creating one of the biggest instances of the near-constant pit at the center of the floor. That took things into the home stretch, where the band would still manage to make their biggest statements.

The band provided political commentary via the screen behind them, rather than any sort of spoken messages. That proved to be most impactful, with statements about the reversal of Roe v. Wade taking over the screen in bold letters during “Freedom.” Statements about forced birth brought up socioeconomic factors, as well as the disparity faced by Black mothers in the United States. It all culminated in the phrase “Abort the Supreme Court” across the length of the stage just as the band were finishing up “Township Rebellion,” a phrase which was woven into the song. The placement in the set was smart, making their feelings known just before they concluded the night with “Killing in the Name.”

The band finished with a bang, and then made their way over to de la Rocha at the monitors for their curtain calls and hugs, as members of the crew carried him backstage.

While they should have been hindered due to the lack of a mobile frontman, Rage Against the Machine gave fans everything they could have wanted and more on Monday night. In a way, it showed that the band has always been about the people, giving as much of themselves as they could at the first of two nights in the United Center. Injury aside, Rage Against the Machine managed to put together a live experience with a raw power that is unmistakably their own.

As of this posting, there’s been no announcement from Rage Against the Machine on how Zack de la Rocha’s leg injury will affect the rest of the tour. (Update: The promoter at the United Center has reached out to Consequence confirming that the show will go on!) Tickets to the upcoming shows are available via Ticketmaster.

See the moment Zack de la Rocha injured his leg during “Bullet in the Head” at the 5:05 mark in the video below, followed by additional video clips and a photo gallery and setlist.

Photo Gallery – Rage Against the Machine at Chicago’s United Center (click to enlarge and scroll through): 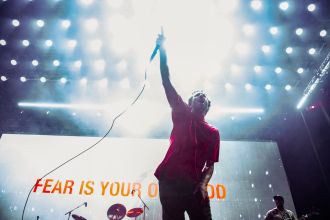 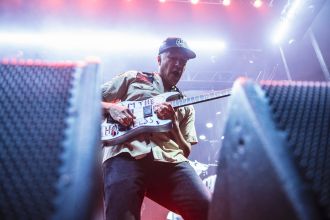 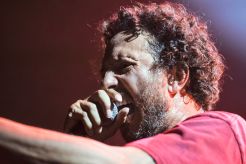 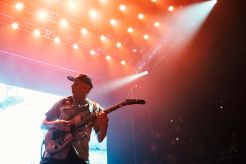 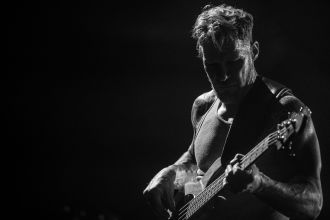 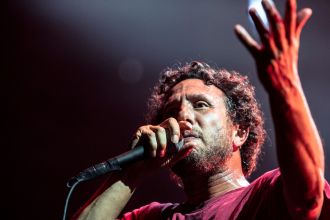 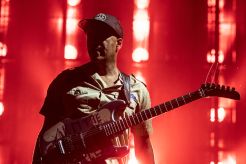 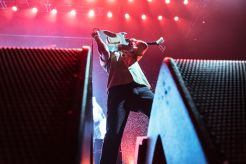 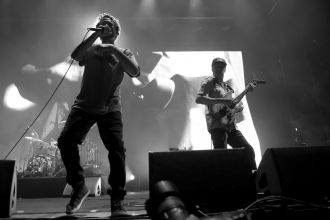 Setlist:
Bombtrack
People of the Sun
Bulls on Parade
Bullet in the Head
Testify (with “Revolver” intro)
Tire Me
Wake Up
Guerrilla Radio
Down Rodeo (tour debut)
Know Your Enemy
Calm Like a Bomb
Sleep Now in the Fire (with extended drum solo)
War Within a Breath
The Ghost of Tom Joad (Bruce Springsteen cover)
Freedom
Township Rebellion (Shortened)
Killing in the Name