The Pitch: Taking on a new installment in the sprawling Resident Evil media franchise is a daunting task. Since the groundbreaking survival horror video game was released in 1996, there have been more than a dozen games that provided source material for six Milla Jovovich-starring films, three animated movies, and a CGI Netflix series.

With such a rich backstory to pull from, Netflix’s new live-action series, simply titled Resident Evil, centers around one of the franchise’s most memorable villains, Albert Wesker (Lance Reddick), while creating a new set of characters around him. In 2022, Wesker moves his twin teenage daughters Jade (Tamara Smart) and Billie (Siena Agudong) to the sterile corporate housing of New Raccoon City to be closer to his work for the nefarious Umbrella Corporation on the cure-all drug Joy (which may be too good to be true).

Meanwhile, 14 years in the future, the grown-up Jade (now played by Ella Balinska) fights for survival in a post-apocalyptic world overridden by infected humans they call “zeroes.” Moving between the two timelines parallels Wesker’s mistakes that led to the end of the world with Jade’s attempts to undo his wrongs.

“It’s You and Me, Always”: As a longtime fan of Resident Evil, showrunner Andrew Dabb (Supernatural), who co-wrote the series with Mary Leah Sutton (The Following), understands how the franchise has always emphasized establishing strong relationships between its characters just as much as zombies and the sins of Umbrella.

The present-day timeline focuses heavily on the relationship between the gregarious Jade and the more reserved Billie: Though they have their share of short-lived tiffs and Billie gets jealous about a boy at one point, the sisters are a team that will go to any lengths to protect one another — especially when they turn up some real shady information about what Albert’s been up to at Umbrella. Smart and Agudong do a believable job establishing this strong bond, especially after a scary incident sets up the stakes almost immediately.

In 2036, it’s established Jade had a falling out with Billie, but that hole in her heart has been filled by her daughter Bea. While spending months at a time away from home, Jade always insists that the often reckless decisions she makes are to create a better world for Bea. Just as she did with Billie, Jade promises that no matter what, “It’s you and me, always.” 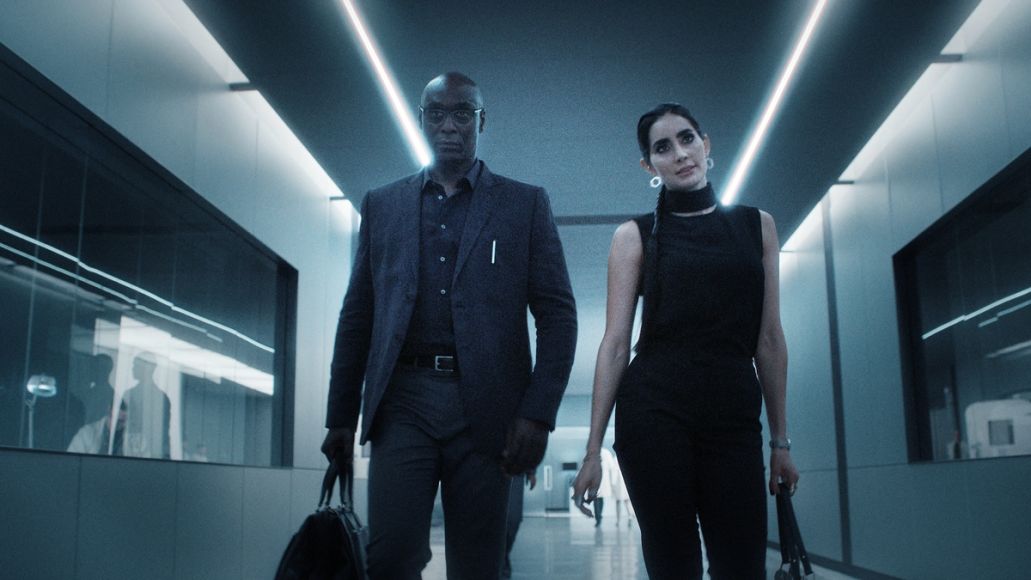 “So We Fix It, We Make It Better”: As it always does, the greed of Umbrella brings about the downfall of humanity in the series. CEO Evelyn Marcus (the scene-chewing Paola Núñez) is hell-bent on restoring the reputation of the company after the infamous Raccoon City incident led to her father being ousted. With trillions at stake and delusions about its potential to solve climate change and world hunger, it’s easy for her to willfully ignore Wesker’s warnings about the drug Joy needing more testing before being pushed to market.

Núñez has some of the best scenes in the show with Reddick, oozing evil from every pore while blackmailing Wesker into doing her bidding. It’s delightful to watch the two actors play off each other, and the opaque nature of their dialogue also leaves viewers wondering exactly what Wesker did to be so far into Marcus’ debt.

Joy is the show’s strongest tie to Resident Evil lore, having been derived from the T-Virus that has caused zombie outbreaks in so many iterations of the franchise. It’s a simple enough concept to latch onto even for viewers who aren’t longtime fans, who are shown exactly what an animal infected with the virus is capable of during the very first episode.

Some Things Old, Some Things New: It’s not Resident Evil without terrifying creatures, and the series certainly delivers on that front. Besides some of the most iconic bio-weapons (such as zombie dogs and lickers), it also includes at least one of the more obscure creatures from the games and a few newer ones that feel right at home in the franchise.

However, how Dabb and Sutton handle Wesker is more of a mixed bag. While taking pains to establish him as a devoted father and scientist with morals during the first half of the season, they make it painfully obvious to even non-fans of the series that there is a much darker, if also compelling, character beyond the surface. Reddick’s talent feels wasted while viewers get strung along, waiting for some sort of payoff whether or not they’re familiar with his backstory, and even the biggest twists revealed about the character don’t really feel earned.

The Verdict: As a new Resident Evil title, the series passes the test of including just enough nods to the franchise to keep longtime fans happy, while not alienating new viewers at the same time. It also does enough to flesh out characters like Evelyn Marcus, who, thanks to Núñez’s performance, has a place as one of the better villains in the franchise’s history.

The two-timeline structure, however, is the show’s weakest link. Though intended to create enough questions to keep people watching, the abrupt shifts between the present and future make it difficult to get fully invested in both storylines. So while following along begins to pay off by Episode 4, the series doesn’t move the plot along enough to prevent impatient viewers from hitting the eject button.

Where to Watch: All eight episodes of Resident Evil will infect Netflix on Thursday, June 14th.