The Pitch: Ben (B.J. Novak) is a guy who doesn’t necessarily have something to say, but he wants to be the type of guy who says stuff worth hearing. That’s why, despite being a working writer in New York, with publication credits including The New Yorker, what he really wants is to make a podcast. “Not every white guy needs a podcast,” producer Eloise (Issa Rae) tells him when he tries to hard-sell her on his ideas at a party, but things change when a former hookup of Ben’s ends up leading him to podcasting gold.

Awakened in the middle of the night by a phone call from a stranger, Ben finds out that a girl named Abilene Shaw, who he’d slept with a few times and texted casually, has died, and her family back home in small-town Texas thinks he was the love of Abby’s life. So, after a guilt trip from Abby’s brother Ty (Boyd Holbrook), Ben treks down to attend the funeral and meet Abby’s family, hoping not to reveal to them how little he actually knew the deceased, who was said to have died from a drug overdose, even though — it’s repeatedly said — she wouldn’t even take an aspirin.

However, after the funeral, Ty starts talking about figuring out who’s responsible for Abby’s untimely end, and Ben realizes that he’s just landed smack-dab in the middle of podcasting gold. Calling Eloise from the side of a Texas highway, he successfully pitches her a podcast investigation into Abby’s death that would also serve as a greater metaphor for These Times We Live In, and she’s sold as soon as she hears the three magic words of podcasting: “dead white girl.” But of course, as Ben investigates the circumstances of Abby’s death, he might be putting himself in similar danger…

“New Yawk Cit-ay?”: Okay, that last line maybe implies that Vengeance is much more of a thriller than it ends up being. While the film opens with a mysterious nighttime sequence that feels like it could either be the past or it could be a flash-forward to someone’s untimely end, the black comedy, which Novak also wrote and directed, proves to be much more focused on ideas than actual suspense.

Fortunately enough, the ideas tend to be pretty interesting, even when Novak can’t resist the temptation to indulge in certain tropes: As Ben begins his investigation, for example, he takes up residence in the Shaw family home, sleeping in Addy’s room and getting not just podcasting equipment but fancy coffee supplies delivered from New York.

The immediate and instant “red state vs. blue state” dichotomy set up continues as Ben struggles to understand the Shaw family obsession with Whataburger (“it’s always there!”) and flounders over questions about which college football team is acceptable to root for. Fortunately, as the story continues — Ben interviewing the locals, getting to know the town as well as the Shaw family — the lines between big city snob and country bumpkin blur, and the characters all gain a bit more depth. 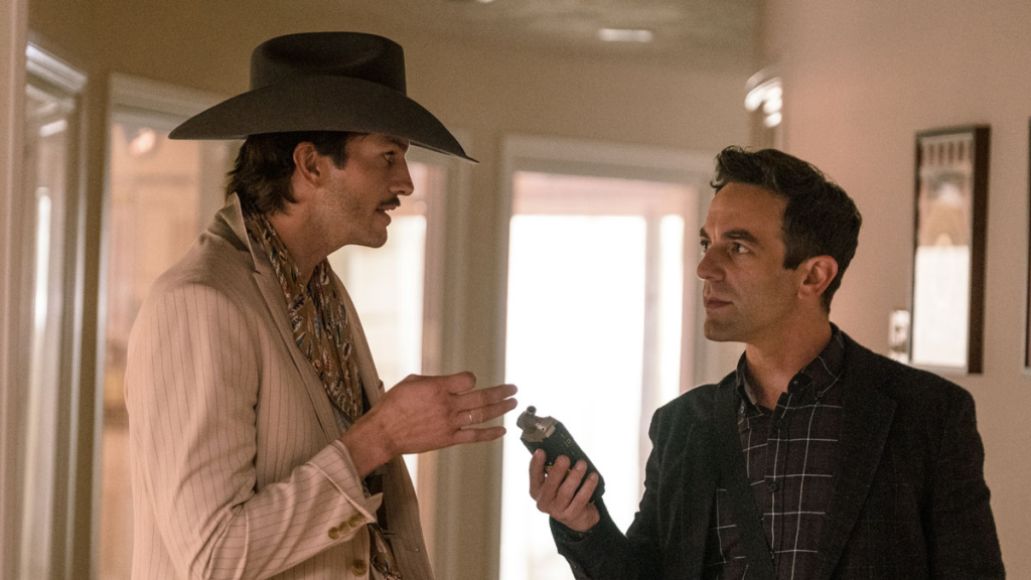 Kelso In a Cowboy Hat: Of the cast, which also includes Dove Cameron, Zach Villa, and J. Smith-Cameron, probably the standout is Ashton Kutcher as Quinten Sellers, a local record producer who Ben interviews because of his connection to Abby’s nascent music career. Wearing ostentatious Western gear and spouting Deep Thoughts about music, society, and humanity, Quinten’s insights are actually pretty engaging, and Kutcher’s inbred good nature takes on a bit of an edge, as he becomes one of many potential suspects in Ben’s investigation.

One of the film’s more minor mysteries is whether or not Quinten is full of shit, and I must confess that even if he is, he has one observation that has stuck with me since seeing the film: He identifies Ben as a “playlist person,” who lets an algorithmically-generated playlist (as created

Perhaps the most difficult character to get a handle on, though, is Ben himself. Our introduction to the character is at a fancy New York event, scrolling through his phone in search of that night’s fling, and talking about the pointlessness of monogamy with his friend John (John Mayer). When you cast John Mayer as a guy’s fellow partner in random hook-ups, it feels like you’re trying to say something about what kind of guy that is. But while early on Novak seems willing to let Ben be the kind of asshole we expect him to be, he never quite sells the kind of growth we might come to expect later on.

The Verdict: One of the film’s strongest attributes is that at a certain point, Ben’s podcast-in-progress actually starts to seem pretty intriguing, especially as he digs into particulars like why the area where Abby’s body was found is the perfect place to dump a body, given the jurisdictional issues surrounding it. Okay, you may or may not find jurisdictional issues that interesting, but what Ben uncovers about the interactions between different law enforcement agencies is clearly perfect material for an episode of a true crime podcast.

But while there’s a lot about Vengeance to recommend it, it doesn’t quite stick the landing, mostly because Ben’s final choices fail to capture the complexity of what he’s been investigating. In the end, Novak seems to see this story as a morality tale, but that doesn’t necessarily feel like the story he’d been telling up until that point; the film might have been more striking, and more successful, if it’d leaned harder into the messier, darker aspects of the narrative. After all, when a young woman dies like this, for whatever reason, it’s a tragedy. And in real tales of tragedies, heroes are hard to find.

Where to Watch: Vengeance arrives in theaters on Friday, July 29th.

B.J. Novak Deals Out Some Intriguing But Muddled Vengeance: Review