Episode 3 of Westworld, “Années Folles,” had two big treats for those addicted to composer Ramin Djawadi’s instrumental covers of pop and rock tunes. Meanwhile, Episode 4, “Generation Loss,” was a little more subtle. Speaking to Consequence as part of our ongoing series on the music of Westworld Season 4, Djawadi reveals that this week’s episode did feature a snippet of music you might have heard before, in a very different context: “Pink + White” by Frank Ocean.

The short burst of solo piano can be heard at the 24-minute mark of the episode, accompanying an establishing shot of the New York restaurant where Christina (Evan Rachel Wood) is about to meet her latest blind date — who happens to look a lot like Teddy (James Marsden), the deceased companion of Dolores (also played by Wood).

Djawadi acknowledges that “it’s very hard to catch because it’s very brief, like 45 seconds,” but when the producers suggested it for that moment, he was happy to try it as a solo piano arrangement because “it’s a beautiful song.”

As he continues, “I never want to be the one that gets too much into interpreting lyrics or anything because I’m never that familiar with lyrics to begin with — I have to be honest, I’m very much an instrumentalist. But if I understand it correctly, the lyrics are very abstract, but I think it’s about a past relationship or past memories. So I think it actually is very much in line with Christina seeing Teddy and having that spark. Because as we know, she has had other dates before, which were just not happening, and then she meets Teddy and then there’s a spark there.”

The “Pink + White” cover is once again done using solo piano, which Djawadi has enjoyed using for Westworld over the years because it “has such a powerful sound to it. Like they always say, there’s nothing that sounds like a piano. It has that wide range with the bass and the highs and everything — there’s a warmth to it, but there’s a loneliness to it. And so I feel like there’s so many ways you can interpret a solo piano because there’s literally just nothing around it.”

If you’re wondering, the full arrangement of “Pink + White” Djawadi created is a little longer than its on-screen appearance, but not by much. “I sometimes do longer versions, but many times I don’t. In this case, I did not do the full song, but it is longer than what’s in the scene — just so that it’s easier to cut in and out. I want to say I did maybe around a minute or so.”

Elsewhere in the episode, much of the music featured heavy electronic influences, but “Generation Loss” also contains another jazz riff on the Sweetwater theme, as Maeve and Caleb make their escape from the Delos park known as Temperance. The riff was recorded at the same time as the jazz covers from Episode 3, as Djawadi explains, “I just mixed it up a little bit, even percussion-wise, from the other stuff that is so synthetic all the time. So it was great fun.”

There’s also an interesting transition moment early in the episode, as the flashback to Caleb’s injury and recovery ends, that stands out not for what’s there but for what’s not there. “Because there’s wall to wall music, we felt that rather than trying to do a transition or anything, we thought it could be great to just cut to silence. Obviously, having no music can be equally powerful, if not more powerful, especially when you have a lot of music around it. So, we thought, let’s just try that.”

Beyond the music, Episode 4 featured some huge reveals for the season, most importantly the realization that, much like Season 1, certain storylines may not have been taking place simultaneously — such as the fact that there are decades between Maeve and Caleb discovering Delos’s new park and Bernard and Stubbs on their quest to save the world.

Consequence didn’t push Djawadi too hard on any clues that might be found in the soundtrack here, for fear of spoilers for future weeks. Instead, we looked back to Season 1, when the Man in Black (Ed Harris)’s quest to uncover the maze and William (Jimmi Simpson)’s adventure with Dolores were running simultaneously in a similar fashion, making the eventual reveal that William was the younger version of the Man in Black all the more a surprise. 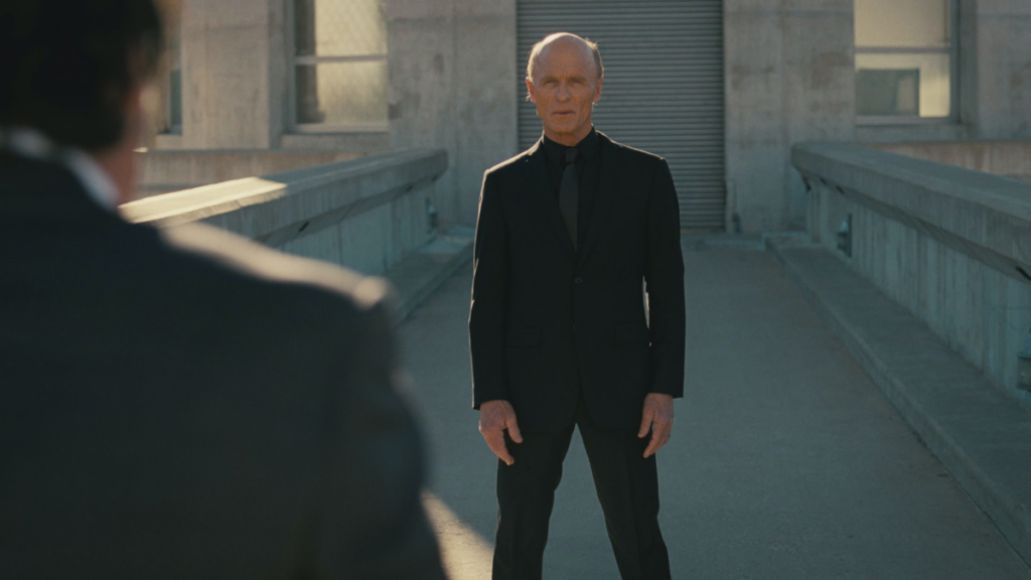 Djawadi confirmed that in Season 1, the Man in Black and William had separate themes, and their scenes were treated differently when it came to the score, so that their secret wouldn’t be exposed too early. “Before [the reveal],” he says, “we would not cross these themes. Certain scenes, if you really mixed that up, you could actually make the connection. So we just treated them separately.”

Basically, he says, when Westworld has a surprise like this in store for the audience, “sometimes we discuss doing something like [hinting at it]. And sometimes we say, let’s just leave it alone. Let’s not draw attention to it. It can be a little bit of both, though, because both can have the right purpose of keeping things in the open.”

That said, the final minutes of the episode feature the continued evolution of the “Control” theme introduced last week. As Djawadi explains, “in this episode, we actually have that theme again, now a little bit more developed, because part of the tower theme now comes out there as well.” It reflects the additional insight we’ve gotten into Hale (Tessa Thompson)’s plan for humanity, as the mysterious tower which has hovered over this futuristic New York City this whole time clearly has a bigger role to play in the episodes to come.

While the episode ends with a large-scale orchestral expansion of the “Control” theme, for the end credits Djawadi chose to continue it, but once again with solo piano. Thanks to the player piano at the Mariposa Saloon in Season 1, solo piano has always been a focal point for the show’s music, which Djawadi notes is interesting for him, because “in the past, I always would shy away from the piano because it’s obviously a very common instrument. But I love using it now, because I’ve never used it that much before.”

Westworld Season 4 airs Sundays at 9:00 P.M. on HBO. Here’s our conversation with Djawadi about Episode 5, “Zhuangzi.”

Westworld Composer Reveals the Frank Ocean Cover You Might Have Missed in Season 4, Episode 4: Exclusive