The Pitch: Our favorite idiots are back on the couch, more or less in the 21st century, and they still haven’t scored. But now they watch TikToks!

In an era when, on one hand, cerebral shows dominate prestige TV, and on the other, every hit on the planet eventually becomes the victim of a lazy, cash-grabbing reboot, it’d be reasonable to be hesitant about a third iteration of Beavis and Butt-Head, which centers on the shenanigans of two senseless, sexist, animated teenage boys. And yet, the first two critic-ready episodes of the new season, which begins streaming on Paramount+ on August 4th, make a strong case for the show’s central argument: Times change, but the fool always gets a laugh.

Mike Judge’s titular characters have always walked a fine line between ignorance and wholesomeness. Beavis and Butt-Head are idiots, and their desire to “score” with hot chicks draws from an adolescent sexism that, in recent years, has mutated into a deadly incel culture. Still, the point was always that their stupidity made them harmless — they were too dumb to hurt anyone but themselves, and their jokes were, for the most part, so childish that you felt okay laughing along with them.

Miraculously, Judge manages to bring these characters into a cultural climate much more attuned to how ignorance breeds violence without offending, tiptoeing around hot topics, or taking cheap shots at “cancel culture” in the process. He pulls this trick by, for the most part, presenting Beavis and Butt-head in a vacuum.

The new film Beavis and Butt-Head Do the Universe brought the characters explicitly into the 21st century, complete with the existence of smartphones and a college campus discussion about white privilege. But in the series, the boys don’t so much discuss the year they’re in as they hint at it by watching YouTube and TikTok alongside their go-to music videos. And even then, they’re still watching the clips on TV, not scrolling on an iPhone.

With more episodes to go (including one in which the boys are middle-aged men), it’s possible that Beavis and Butt-Head will more obviously tackle the problems presented by the modern age, but it’d probably be better if it didn’t. Lord knows we don’t need another comedian attempting Capital-C Commentary about how Times Have Changed (and likely alienating his audience in the process), and Beavis and Butt-Head’s simplicity offers a welcome escape from our ever-darkening reality.

You Guys Are Smart, Right?: In that vein, the first episode of the new series, “Escape Room,” sees Beavis and Butt-Head join two girls in (you guessed it) an escape room after the girls learn the business requires at least four people to participate in the challenge. Naturally, Butt-Head, ever the thoughtful schemer, assumes the girls’ request that they split the escape room’s cost “four ways” means they want to have a foursome, so he declares, “We will solve the escape room, and then we will solve the greatest mystery of them all: Scoring.”

Spoiler alert: Beavis and Butt-Head don’t score with the girls; instead, they make a wrong turn on the way into the escape room and get stuck in the bathroom, where they remain for the rest of the episode. “Escape Room,” then, offers a pretty run-of-the-mill introduction back into the series, though one girl’s quip that the weirdos “must be in tech or something” offers a hilariously unexpected jab at a different brand of annoying guy, and a quick reminder that we really are witnessing Beavis and Butt-Head in 2022. 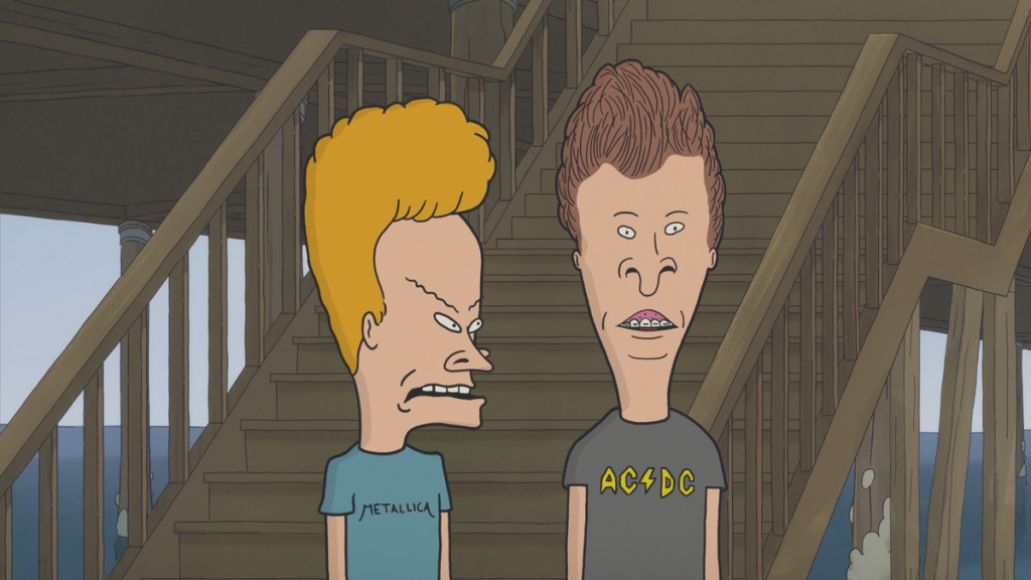 Beavis and Butt-Head Do the Universe (Paramount+)

In the second story of Episode 1, “The Special One,” Beavis discovers a dumpster fire in an alley and learns he can communicate with the flame. Yet, despite his longtime love for fire, he quickly realizes that being its Special One isn’t all that great; even the inferno wants Beavis to grow up, commanding him to do such tasks as run a mile, clean up trash, and write a book report. “It’s one thing to screw around in middle school, but you’re almost at the point where it counts for colleges,” the fire insists. Ultimately, Beavis turns against the flame and puts it out, but his “Heh heh, fire!” refrain — delivered in that voice, of course — incites a giggle after all these years.

The second episode of the season begins with “Boxed In,” a story that excels at the type of animated physical comedy such a dumb show needs. Here, Beavis and Butt-Head hide out in a box at school in order to sneak into Mr. Van Driessen’s office and get back the drill he confiscated from Beavis during math class. Of course, instead of sitting in the hallway all day, their box gets taped up by the janitor and taken to the school basement, where the two rot away for a week. Inside the cramped box, the two boys lay on top of each other, head on butt, attempting to scratch each other’s limbs and strangling each other when they get annoyed.

You Know Their Names?!: Even better than the plot of “Boxed In” and second story “Beekeepers” — which, in addition to Mr. Van Driessen, sees the return of fan-favorite character Mr. Anderson — are the media-mocking interludes that break up the main stories.

In one such instance, Beavis and Butt-Head watch an ASMR video, a 21st-century trend you’d expect the two to belittle to no end. Instead, both boys find the clip relaxing — and Beavis is even turned on by the noises. In another, the two watch the music video for Latin American boy band CNCO’s song “Por Amarte Así,” which leads Butt-Head to drop the astute observation that said groups always feature “one really smart one, one ugly one, and, uh… three other dudes.” Who said he wasn’t smart?

Even in an era where kids don’t spend hours watching music videos on MTV, Beavis and Butt-Head’s music video segments remain its funniest interludes. In “The Special One,” the teenagers watch the visual for Cale Dodds’ “I Like Where This Is Going,” which tells the uplifting story of the country hunk attempting to teach a less conventionally attractive man how to date. Naturally, this plot line spurs an infinite amount of cynical comments from Butt-Head, who accuses Dodds of grooming the other man (“He’s gonna wind up in a shallow grave”).

Better yet is a scene where Beavis and Butt-Head watch the video for BTS’ “Dynamite.” Upon first watch, including the boy band — who has one of the most notoriously rabid fan bases in all of popular music — seems like a death wish. But when Beavis lets slip that “This song kicks ass,” eventually revealing his BTS stan-dom, Judge (hopefully) side-steps internet backlash.

The Verdict: Almost 30 years after its original premiere, we’re far removed from the slacker culture in which Beavis and Butt-Head first thrived. Still, even though being smart is back in fashion, Judge reminds us with the first two episodes provided to critics that sometimes it’s okay to hang out on the couch and giggle over nonsense with your buddies. Sometimes, when the real world is giving us such a grave emotional pounding, it’s exactly what you need.

Where’s it Playing: New episodes of Beavis and Butt-Head begin streaming on Paramount+ on August 4th.