On April 26th, 2009, a television show called Breaking Bad aired an episode called “Better Call Saul.” Thirteen years later, a television show called Better Call Saul aired an episode called “Breaking Bad.” Here we are at a full-circle moment for one of television’s great creative achievements, and yet the significance of Bryan Cranston and Aaron Paul’s long-promised return as the iconic Walter White and Jesse Pinkman manages not to overshadow the action just now revving up in Omaha, Nebraska.

The elegance of this new episode’s name choice, which is split between two very different periods of time for one Jimmy McGill/Saul Goodman/Gene Takovic (Bob Odenkirk), cannot be overstated, especially because of how this episode is in part a companion piece to Breaking Bad Season 2 Episode 8. What that really means is that while the bulk of the episode remains in black-and-white, we return to the world of vibrant color for several flashback scenes, filling in the gaps around Saul’s initial introduction into this narrative.

In case it’s been a while: In the Breaking Bad episode “Better Call Saul,” Saul gets hired to help spring Badger, one of Jesse and Walt’s dealers, after Badger gets arrested. When Saul refuses a bribe to keep Badger from confessing, Walt and Jesse kidnap Saul to attempt to pressure him into keeping Badger’s mouth shut — but Saul flips the script on them, instead offering his legal services for their less-than-legal operation.

In the Better Call Saul episode “Breaking Bad,” we get to see more of Saul’s late-night abduction by Jesse and Walt, including a healthy dose of the bickering-married-couple act that made that pair so fun during the original show’s run. Saul’s now-infamous “Lalo didn’t send you? No Lalo?” speech also gets a little extra context (given what we now know about the fates of both characters to which he was referring). In addition, the episode gives us a refreshing burst of Mike (Jonathan Banks), even more surly and snarky now, after years of working with Saul Goodman.

While there are still two episodes left, this might be the only episode of Saul to end up featuring Cranston and Paul (though with this franchise, literally anything feels possible). No matter what, the ease with which both actors slip back into their respective roles is staggering; Cranston in particular captures every nuance of Walter’s hunched physicality as if Season 2 of Breaking Bad were yesterday.

But even with those flashbacks, Better Call Saul‘s present-day storyline still remains captivating. In cold grayscale Omaha, Gene makes contact with his former secretary Francesca (Tina Parker) back in Albuquerque, and we get a huge burst of information that we may or may not have already known (largely depending on if we saw El Camino: A Breaking Bad Story and/or were paying attention during the final episodes of Breaking Bad): Walter White is definitely dead, Skyler White took a deal, and Jesse made his escape — though it’s thought he fled to Mexico, as arranged by Badger and Skinny Pete in El Camino.

Also, former Saul associate Kuby (Bill Burr) is in the wind, while Huell (Lavell Crawford) went back to New Orleans after being held by the DEA under false pretenses. Jimmy’s old nemesis in the D.A.’s office, Bill Oakley (Peter Diseth), is now a defense attorney, and as for Kim (Rhea Seehorn)…

Well, after the tsunami that was Walter White happened, Francesca reveals, Kim at least asked her about the fate of the former Mr. Wexler, and that leads Gene to make a call he’s probably been wanting to make for years. Thanks to some help from the phone company and a bunch of quarters, he gets connected to Kim’s current workplace: Palm Coast Sprinklers, located in Titusville, Florida. 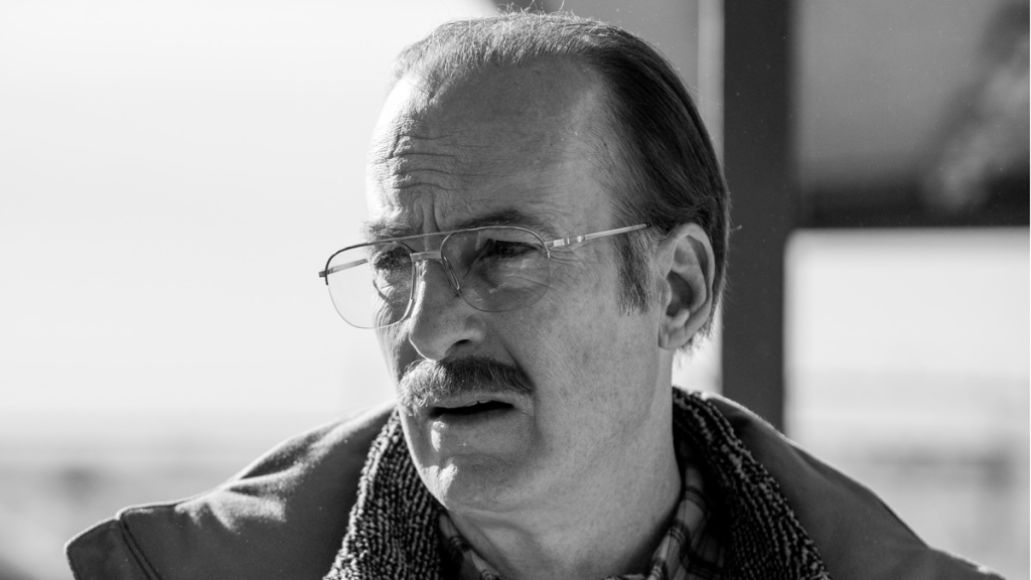 We don’t get to hear the resulting conversation, as writer/director Thomas Schnauz parks us across the way, letting us watch Gene get more and more riled up at whoever’s on the other side of the phone, but it does not go well. (Who among us hasn’t wanted to kick in a pane of glass, after talking to an ex?) The scene does do some serious damage to Seehorn’s “Maybe Kim is working at a Claire’s Accessories at the Omaha mall” theory — which was always clearly a joke — but also leaves things open-ended enough to be revisited before the series comes to a close. (If the point of that scene was to make us even thirstier for details on Kim Wexler, mission accomplished.)

The real purpose of Gene making contact with his past life in Albuquerque, though, is money. Francesca reveals that all of the assets he thought he’d carefully hidden are gone, so Gene fires up the ol’ scheme machine for a new ongoing con, one involving the assistance of his new pals Jeff (Pat Healy) and Buddy (Max Bickelhaup, previously known as “Jeff’s friend”).

It’s a scam that Danny Ocean would probably yawn at — Gene gets solo men drunk at a bar, Jeff drives the men to their homes in his cab, offering them barbiturate-laced bottled water on the way, and after they’ve passed out at home Buddy sneaks in to steal all of their personal information. While not revolutionary, it’s a smart enough scam to work repeatedly, until Buddy has qualms about stealing from a cancer patient.

“A guy with cancer can’t be an asshole? Believe me, I speak from experience,” Gene points out, deciding to head out and take care of the cancer guy on his own — the episode ending just as he opens the door on his mark, intercut with one more flashback: Saul Goodman, full of confidence, walking up to J. P. Wynne High School, ready to pitch Walter White his legal services.

The only serious criticism to offer of “Breaking Bad” (the episode) is that you do need a pretty detailed memory of everything that happened in “Better Call Saul” (the episode) to get a full sense of how Better Call Saul (the show)’s flashbacks interlock with the events of Breaking Bad (the show… Seriously, if the writers did this on purpose to fuck with us critics… well-played).

Fortunately, Netflix is right there, should you want to go back and revisit the events of Breaking Bad Season 2 Episode 8. Doing so will reveal that as with everything else this franchise does, the attention to detail is exacting, as the scenes fit together like puzzle pieces we didn’t know were missing.

The puzzle metaphor actually proves to be a pretty good one for thinking about these shows as a unified whole. Breaking Bad might have begun rather humbly — the second-ever show greenlit by AMC in its infancy, squeezing out a seven-episode first season under the shadow of the 2007 WGA Writers’ Strike. But since those days, it has become a cultural force while also remaining one of the most creatively exciting TV franchises of all time. (It’s such a rare pleasure for something popular to also be good.)

By returning to Breaking Bad for its third-to-last episode, Saul brought the viewer closer than ever to completing this narrative, because as much has been revealed about this world, there is a full picture still waiting to be revealed. And with each episode, hell, each scene, the picture being assembled becomes clearer, because at this point, there aren’t massive mysteries we’re waiting to see resolved. We’re instead waiting for the final judgment on a man who may have had the goodness scraped out of him forever — waiting to see if redemption is possible or even desired, after you’ve broken bad.