Korean quartet The Rose are headed out for a globe-spanning run across North America, South America, and Europe with tickets quickly following the announcement. Join singer-guitarist Kim Woosung, who more recently served as a solo act supporting Epik High, singer-keyboardist Park Dojoon, drummer Lee Hajoon, and bassist Lee Jaehyeong for their next group outing, the “Heal Together World Tour,” lasting through 2023.

What Is The Rose’s Next Tour?

The Rose will launch their “Heal Together World Tour” in Chicago on October 13th. Following a stop in Minneapolis on October 15th, the band will go on an East Coast run including Boston, New York, and Washington, DC, then close out the month in Atlanta. They open November with shows in Houston and Dallas, then continue west to Phoenix and Las Vegas on November 6th and 7th, respectively. The group’s US dates conclude after a series of West Coast concerts in San Francisco, Seattle, Anaheim, and Los Angeles, while their North American leg officially wraps in Mexico City on November 26th.

The South American leg of the band’s world tour opens in Santiago, Chile on November 28th, then rounds the continent with stops to Peru, Argentina, and Brazil. The four dates will also mark the end of their 2022 itinerary.

The tour resumes in Brussels, Belgium on January 23rd, 2023. The subsequent European leg will hit Switzerland, Italy, Germany, and Poland in January, followed by stops to Norway, Denmark, Sweden, and The Netherlands in February. They’ll play London on February 14th, Paris on February 16th, and Barcelona for their final fully-announced performance on February 19th.

The Rose also have a set of shows in Asia coming up ahead, and official dates will be revealed imminently.

Who Is Opening for The Rose on Tour?

There have no announcements at this time regarding supporting acts for The Rose on their “Heal Together World Tour.”

See The Rose’s full list of tour dates below, and get tickets to all of their upcoming shows here. 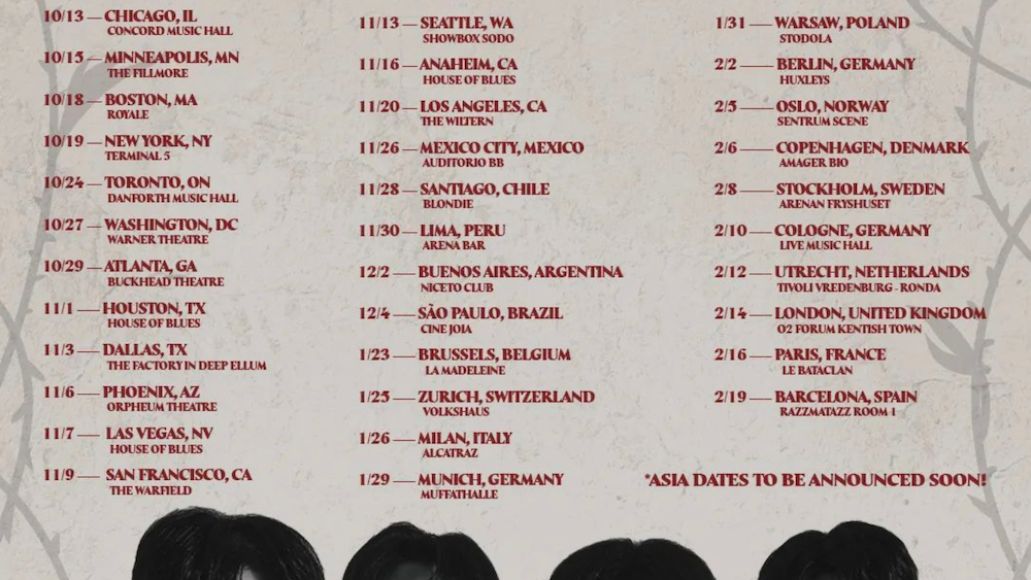