“I’m j-hope from BTS,” he told the Lollapalooza crowd, doing nothing more than introducing himself and nothing less than making history.

BTS are perhaps the most overwhelming musical force the world has ever known, having conquered the globe with an ARMY bigger than Beatlemania. The septet became such an institution that when they announced a “hiatus,” to pursue solo projects, the resulting panic cost their management label HYBE $1.7 billion in market cap in just two days.

“We are not disbanding,” the group clarified. j-hope said it in a different way under the banner of Chicago’s skyline in Grant Park Sunday night: “I’m j-hope from BTS.”

He’s a lot more than that. With this appearance at Lollapalooza 2022, j-hope became not just the first of the Bangtan Boys to explore his solo identity during this new phase, but also the first South Korean to headline a main stage at a major American music festival. But the moment is even more singular: There has never been a group as popular as BTS, and so there has never been a performance debut from someone this gobsmackingly famous. Analogies to the first solo performances by Paul McCartney and John Lennon, or Dave Grohl’s first appearance as Foo Fighters, might be underselling the moment. There’s a chance the July 31st concert could earn a dog-eared page in musical history books. 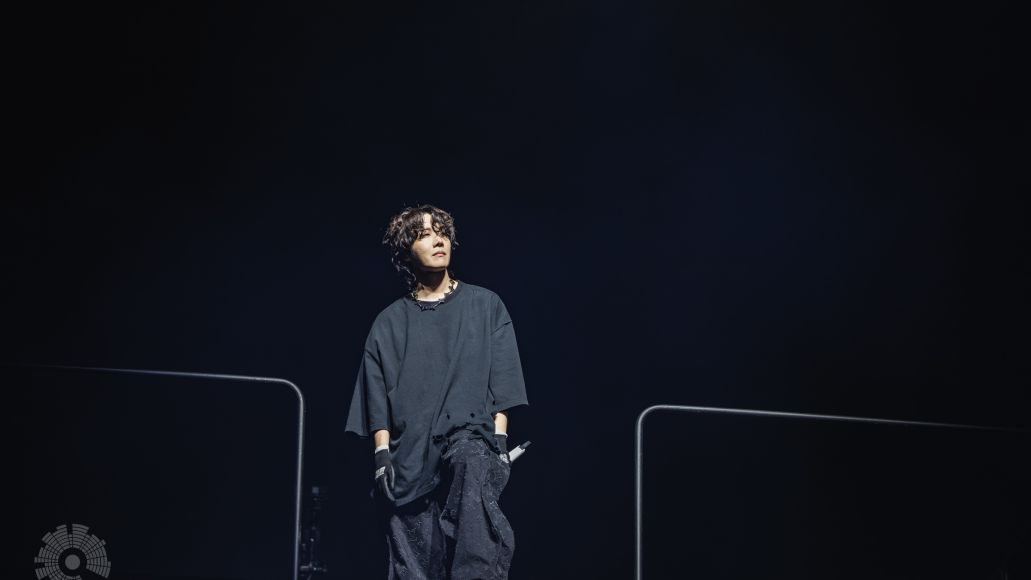 By my clock, it started about 10 minutes early.

Scarcely had Lucille Croft wrapped her performance at the Petrillo Music Shell when screens lit up across the lawn at the headline stage sponsored by Bud Light Seltzer: “MORE?”

The word elicited an expectant cry from the lawn. “MORE” is the name of the lead single from Jack in the Box, j-hope’s dark — by the sparkling standards of BTS, anyway — new album. It investigates the myth of Pandora’s Box, in which a moment of curiosity unleashes a plague of ills on humanity, as well as hope.

The attending members of ARMY signaled their readiness by holding glowing orbs into the air. Drone footage would show the crowd glittering white in a sea of blackness.

Those lights began dancing at the first waves of music. The 28-year-old made his entrance on top of a platform visible to the back of the lawn. He wore black jeans and a black oversized t-shirt with tasteful holes poked out, a grungy effect rounded out with gloves and an emo haircut. Altogether a sharp contrast from the more colorful image he cultivated in BTS.

That wasn’t the only difference. Often regarded as the best dancer of the bunch, j-hope spent the first half of his set avoiding the relentless clockwork choreography that helped make BTS famous. He tore at his hair and face on “MORE” and prowled the stage during “Pandora’s Box,” but there was an improvisational air to many of his movements.

Still, he was among the most physically active performers I saw at Lollapalooza. He never came up gasping for breath, and without a backing track his voice sounded studio perfect. Even demanding rapping sections didn’t wind him, and the way he scratched and clicked through the syllables of “Base Line” makes me think he’s an A+ beat boxer.

j-hope did build a couple of longer breaks into the set; lengthy intermissions covered by videos and voiceovers. He wasn’t just resting for the next feat of athleticism, but also using these moments to reset the mood. 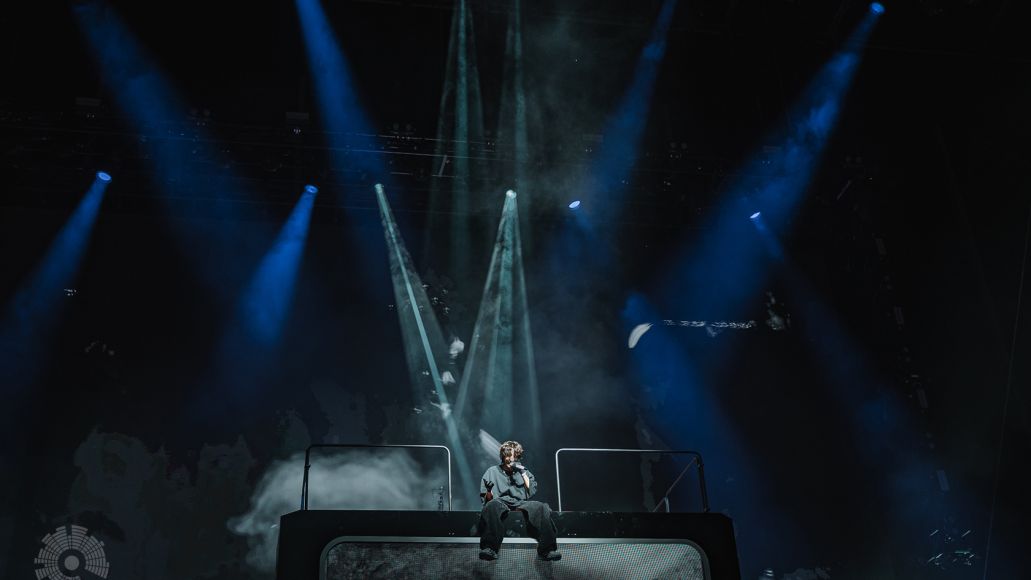 The first half of the concert took place in a severe color palette: black clothes in white and red lights. But after one such intermission, j-hope reappeared with a crack of fireworks, looking as if he’d just been shot out of a cannon. This visual trick came with an explosion of color: j-hope himself had changed into a white outfit with green-framed sunglasses and green gloves. Suddenly a fleet of backup dancers appeared in blues and oranges and violets.

No longer alone, j-hope flashed a sunnier disposition. Together, he and his dancers capered to “Dynamite (Tropical Remix),” a light-hearted twist on BTS’ record-smashing single.  And his dancing! It looks better in person than on the screen. In the same way a falling leaf can suddenly veer into a whole new direction with a graceful twirl, his body spins and gyrates on impossible whims. And while this second section was much more structured than the first, the choreography remained looser and less demanding than some of BTS’ most famous dances.

j-hope saved his biggest surprise for the end, unveiling Becky G for a performance of their 2019 collaboration, “Chicken Noodle Soup.” It was the first time they had ever played the song live, and Becky G used the platform to connect with Latinos in the audience and around the world.

j-hope also took a moment to reach fans at home by speaking in Korean. Fittingly, he ended the set with “Future,” an optimistic anthem for tomorrow that, nevertheless, is a little fuzzy on the details. Alongside “Pandora’s Box,” “Future” ties up the broader themes of Jack in the Box, especially the idea that, as the intro puts it, “It was Hope that was kept in the innermost nook of the box. It trailed behind the miasma of darkness, assuaging the ill effects on humankind.”

There’s no telling what the future holds for j-hope and BTS, in part because everything they do is unprecedented. But Pandora couldn’t put everything back in the box, and time only runs in one direction.

j-hope is still one of seven. But he is not only one of seven, he’s also the black shirt in the red lights and the white shirt doing Tropical Remixes and the top-flight dancer who’d rather keep it loose. In Chicago and on livestream, he put something out into the world — something of himself. Just one. Not seven. And though BTS will reunite, it will never be exactly the same.

Check out more exclusive photos of j-hope performing at Lollapalooza 2022 after the setlist below. 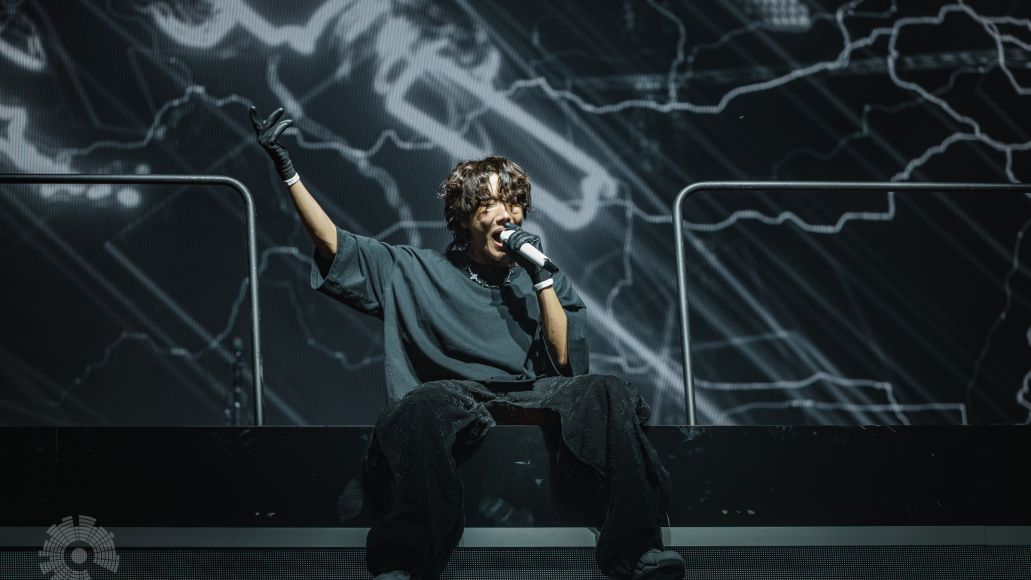 j-hope just took the stage at Lollapalooza, becoming the first South Korean musician to ever headline a music festival in the US. 🙌#jhopeAtLollapalooza #hobipalooza #BTSARMY pic.twitter.com/PlhuImwbvx 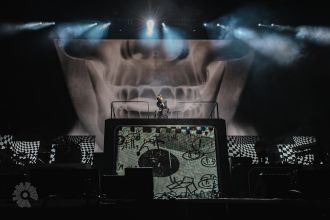 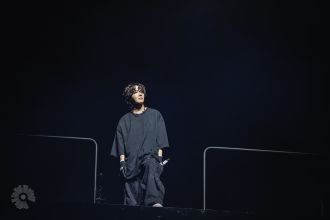 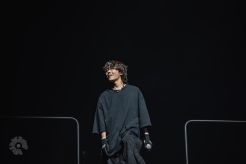 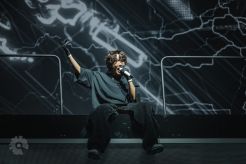 Editor’s Note: An earlier version of this article incorrectly spelled the name of a song. It is “Base Line,” not “Bass Line.”