The Pitch: The Walking Dead, the flagship show of the long-running zombie apocalypse franchise, is finally coming to an end later this year after 11 seasons. But the Walking Dead universe is showing no signs of slowing down, with multiple spin-offs on the horizon, including ones for fan-favorite Daryl as well as Maggie and Negan, but the first to premiere is the anthology series Tales of the Walking Dead.

The series, created by Walking Dead honcho Scott M. Gimple and franchise stalwart Channing Powell, gives a level of freedom never seen before in the Walking Dead universe, allowing new writers, directors, and stars to tell stand-alone tales of the zombie outbreak. As with any anthology, quality can vary wildly between entries, but the three episodes provided for review are more good than not, so there’s reason for optimism.

Stars – They Survive the Zombie Apocalypse Just Like Us! First, the bad news: “Evie/Joe,” the show’s premiere, is a total dud, despite starring Terry Crews and Olivia Munn. Crews plays Joe, a doomsday prepper who jovially waits out the zombie apocalypse in his cushy bunker. But circumstances eventually lead him to emerge from his bubble to traverse the wilderness, where he encounters Munn’s new-age hippie type. Cue the surface-level “can these two opposites get along” road trip sitcom wackiness.

“Evie/Joe” tries for a lighter tone than most Walking Dead fare, and while the effort to distinguish itself is appreciated, the result is much more grating than charming. Crews is usually a wonderful screen presence but feels miscast here, since the question of whether Joe will ever warm to Evie is never really in doubt when he’s played by a guy whose career has primarily been defined by “hardbody with a heart of gold” roles. Munn does her best but is saddled with a heap of tiresome “free spirit” clichés. The whole thing just doesn’t click.

Tales of the Walking Dead (AMC)

Nature vs. Nurture: More successful is the fourth episode, “Amy/Dr. Everett,” which features another loner encountering a spirited young woman (the premise overlap should be worrisome, but the show’s clear connective tissue is putting two disparate people together and seeing if they can find common cause, so we’ll give it a pass).

Anthony Edwards stars as Dr. Everett, a naturalist who lives in isolation, studying the zombies as a new species. Then one day he saves Amy (Hacks scene-stealer Poppy Liu) from some walkers and she threatens to upend his entire worldview.

On a surface level, “Amy/Dr. Everett” is basically what you’d expect from a Walking Dead spin-off: filthy people running around the woods, wrestling with zombies… and morality! But the naturalism angle adds a nice twist to a familiar story and it helps that Edwards is a much more convincing misanthrope than Crews. The story’s various turns probably won’t shock anyone familiar with the Walking Dead franchise, but it’s a solid entry with some nice details. 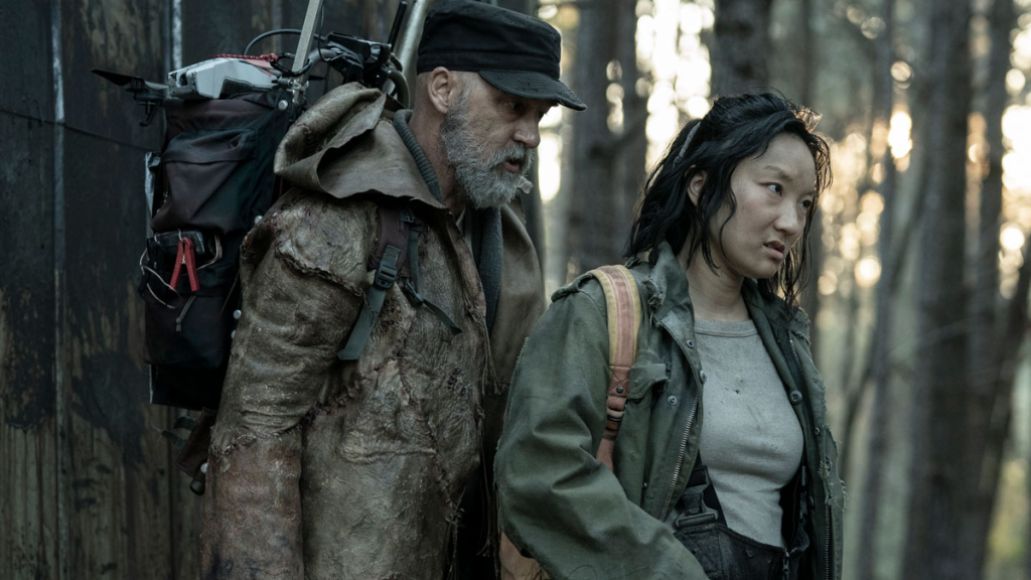 Tales of the Walking Dead (AMC)

Best in Show: The strongest episode in a walk is “Blair/Gina,” which has two major things going for it: 1) casting Parker Posey and Jillian Bell and 2) throwing out the rules of the Walking Dead universe to deliver something wholly new to the franchise.

Set in the early days of the zombie outbreak, Gina (Bell) works as a receptionist at an insurance office working under her obnoxious boss, Blair (Posey). How obnoxious? Well, Blair orders her employees to field calls while she plans to sneak out of the city with her boyfriend. But when Gina goes to a gas station for snacks and encounters a stranded Blair, the pair get caught up in a truly strange series of events that forces them to come together and try to truly understand one another.

This is being kept coy so you can enjoy the episode unspoiled, but suffice to say, “Blair/Gina” takes an established genre and applies it to the world of Walking Dead, to very enjoyable results. Posey could do this part in her sleep but still brings manic, self-absorbed energy to Blair, and Bell proves her comic equal, as the two women trade verbal barbs and literally tear out one another’s hair.

And if the premise isn’t fresh enough, the episode also features people who have showered recently running around actual civilization, something the franchise hasn’t seen in many years. It’s a welcome departure in all sorts of ways and that energy is enough to carry it through.

The Verdict: While the world probably doesn’t need yet another Walking Dead series, this one at least tries to liven things up with name actors and a variety in storytelling. Viewers who had previously given up on the franchise might appreciate the anthology format, with its emphasis on stand-alone stories (no fighting the same villain for multiple seasons here!).

The show also delivers the usual zombie action, so long-time viewers should also be satisfied. (And if fans resent this show not tying into the broader Walking Dead universe, a future episode features Samantha Morton reprising her role as Whisperer leader Alpha.)

Regardless of your relationship to The Walking Dead, seek out “Blair/Gina.” That’s a fun one.

Where to Watch: The first episode of Tales of the Walking Dead premieres on August 14th on AMC and the first two episodes will be on AMC+ the same day. Subsequent episodes will premiere weekly.