East Coast hip-hop royalty descended upon the Midwest as Wu-Tang Clan and Nas kicked off their “NY State of Mind Tour” (grab tickets here) at the Hollywood Casino Amphitheater in St. Louis on Tuesday night (August 30th). The house was packed; lawn tickets were being sold for the same price as a 25-ounce Bud Light at the concession stand, and the strategy paid off. If it wasn’t sold out, the turnout had to have been close to the venue’s 20,000 capacity.

Given that the tour’s namesake is derived from Nas’ legendary Illmatic track, nostalgia was the evening’s leitmotif. The night would lean heavily on material from Nas and Wu-Tang’s classic albums, with both making frequent references to hip-hop’s golden age and those who were there to live it.

“Who here had a hip-hop album on cassette tape?” asked Nas at one point, summing up the concert with a proper IYKYK question. When a younger fan replied in the affirmative, Nas retorted: “You were too young, but thanks for coming.” For all the Millennials and Gen Z kids in attendance — and there were many — this night was for the heads who were blasting beats off boomboxes back in the day. 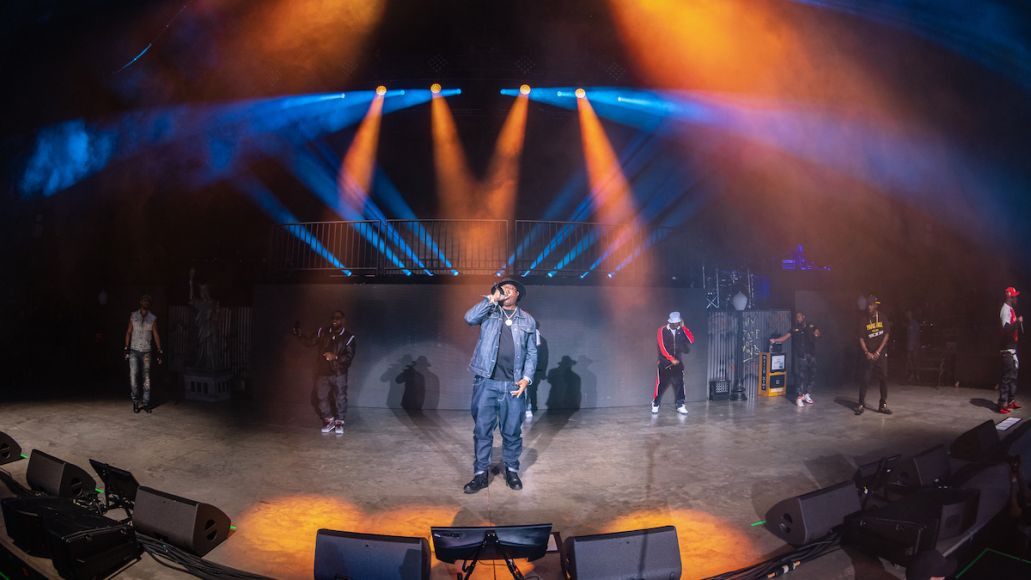 Wu-Tang Clan were almost in full force: RZA, GZA, Ghostface Killah, Raekwon, Inspectah Deck, Masta Killa, U-God, and Young Dirty Bastard — the son of the late Ol’ Dirty Bastard — all appeared at some point (Method Man was noticeably absent). They kicked off the festivities, opening with GZA’s “Liquid Swords” before hitting the best of 36 Chambers: “Bring da Ruckus,” “Wu-Tang Clan Ain’t Nuthing ta F’ Wit,” and “C.R.E.A.M.” The crew seamlessly traded verses through each song like it was 1993. Massive video boards behind the stage displayed Shaolin iconography and vintage scenes from New York, further adding to the time-traveling immersion of the performance.

Wu-Tang Clan and Nas Bring it Back to Hip-Hop's Golden Age at Tour Kickoff in St. Louis: Review, Setlist and Photos