Iron Maiden are reissuing The Number of the Beast on triple-LP vinyl for the seminal album’s 40th anniversary.

The new edition is set to arrive on November 18th and offers a couple surprises for hardcore Maiden fans. Most notably, the original tracklist has been reimagined to include “Total Eclipse,” which replaces “Gangland” on side B.

While the alteration might irk purists, founding bassist Steve Harris offered an explanation for the change. Initially, the band had to make a hasty decision between including “Gangland” — generally considered one of the weaker moments on TNOTB — and “Total Eclipse.” Ultimately the former was chosen, but the latter is the better song, in Harris’ estimation.

“On this vinyl release we get the chance to put ‘Total Eclipse’ in its rightful spot on the album for the first time,” he said via a press release. “The reason it didn’t make it in the first place was that it was all a mad rush when we were finishing the record and we had to get the “Run to the Hills” single out before the tour and we basically had to pick a B-side and it was between “Gangland” and “Total Eclipse” and we just picked the wrong one, really! I think “Total Eclipse” is a stronger song and the album would have been stronger if it had been on there.”

Additionally, the other two LPs in the forthcoming set will house the first-ever vinyl release of the Beast over Hammersmith live album. These recordings are taken from a March 1982 performance at the Hammersmith Odeon in London during Maiden’s “Beast on the Road World Tour,” just days before the release of The Number of the Beast. The upcoming 2-LP treatment marks the second time the live album has been issued following a CD release as part of the Eddie’s Archive box set in 2002.

Iron Maiden are currently on a North American leg of their ongoing “Legacy of the Beast Tour.” The band plays Seattle on Thursday night (September 29th) and remains on the continent until a final date on October 27th in Tampa, Florida. Tickets are available via Ticketmaster.

You can pre-order The Number of the Beast vinyl reissue via this location. Watch a trailer for the collection and see the complete package and tracklist below. 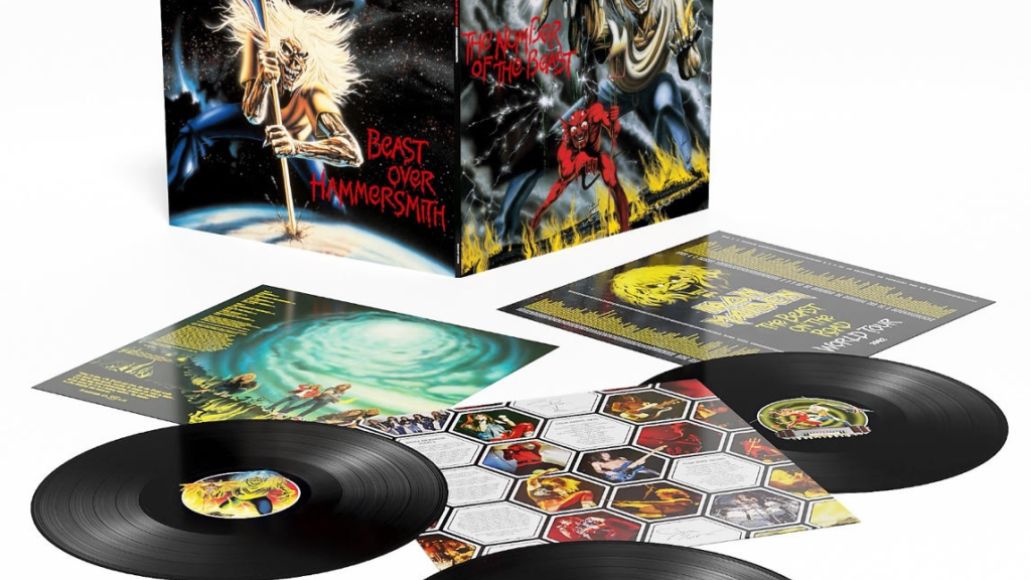 Side B:
The Number Of The Beast
Run To The Hills
Total Eclipse *
Hallowed Be Thy Name

LP 2 – Beast over Hammersmith
Side C:
Murders In The Rue Morgue
Wrathchild
Run To The Hills
Children of The Damned
The Number Of The Beast

LP 3 – Beast over Hammersmith
Side E:
The Prisoner
Hallowed Be Thy Name
Phantom Of The Opera
Iron Maiden