The Pitch: Herman Munster, a big goofy lummox made of reanimated dead bodies in the style of Frankenstein’s monster, marries the ghoul of his dreams, a vampire named Lily. But the newlyweds aren’t shacked up in her father The Count’s castle in Transylvania for long before they’re unceremoniously kicked out, and decide to start a new life in America.

The Munsters is rock star-turned-horror auteur Rob Zombie’s reboot of the CBS series of the same name, which ran for two seasons in the mid-‘60s, and then staggered around for decades in syndication like the living dead. And while the Netflix film is a prequel, detailing Herman and Lily’s meet cute before the birth of their sitcom son, werewolf boy Eddie Munster, it’s otherwise impressively faithful to the source material’s look and sense of humor.

Family Affair: It’s easy to root for Rob Zombie’s unique evolution from a corpsepaint-wearing shock rocker to a horror filmmaker since his debut feature, 2003’s cult classic House of 1000 Corpses. It’s a unique tale of an artist moving from one medium to another while staying dedicated to the same genre and aesthetic – imagine, for a moment, if a country music star transitioned seamlessly from singing songs about cowboys to directing westerns.

Other than his biggest box office hits, a 2007 remake of John Carpenter’s Halloween and its 2009 sequel, the former White Zombie frontman has kept the budgets low on his films and eschewed Hollywood star power. The three main characters in The Munsters are all played by regulars of Zombie’s previous films, with Jeff Daniel Phillips as Herman, Daniel Roebuck as The Count, and the director’s wife, Sheri Moon Zombie, as Lily. If this was your first Rob Zombie movie, the only familiar face might be Jorge Garcia of Lost fame. Cassandra Peterson, better known as Elvira, Mistress of the Dark, also has a small role, though she’s unrecognizable as a real estate agent dressed as a witch for Halloween.

In July, Rob Zombie actually took to Facebook to debunk rumors that The Munsters was a bigger, more expensive movie than it really is: “How the hell did everyone get the idea that The Munsters cost 40 million dollars? Fuck, I wish I had that kind of budget.” The movie was filmed in Budapest, which was probably a cost-saving move rather than an attempt to capture an authentic Central Europe look in the scenes that take place in Transylvania. The whole thing looks like it could’ve been filmed in an unusually well-stocked Spirit Halloween store.

In Living Color: In one of show business’s most famous examples of parallel thinking, The Munsters premiered on television in 1964 six days after a similar satirical sitcom about a family of macabre monsters, The Addams Family. And nearly 60 years later, the two competing franchises still can’t seem to get away from each other: this new incarnation of The Munsters arrives on Netflix just two months ahead of Wednesday, Tim Burton’s new Addams Family spinoff series.

The Munsters got better primetime ratings than The Addams Family in the ‘60s, but in subsequent decades has lagged behind in terms of continued relevance, especially after two hit Addams Family features in the early ‘90s. The last attempt to introduce Herman Munster to a new generation, 2012’s Mockingbird Lane, was a stylized modernization from Pushing Daisies creator Bryan Fuller that NBC declined to pick up as a series, airing the pilot as a one-off Halloween special. 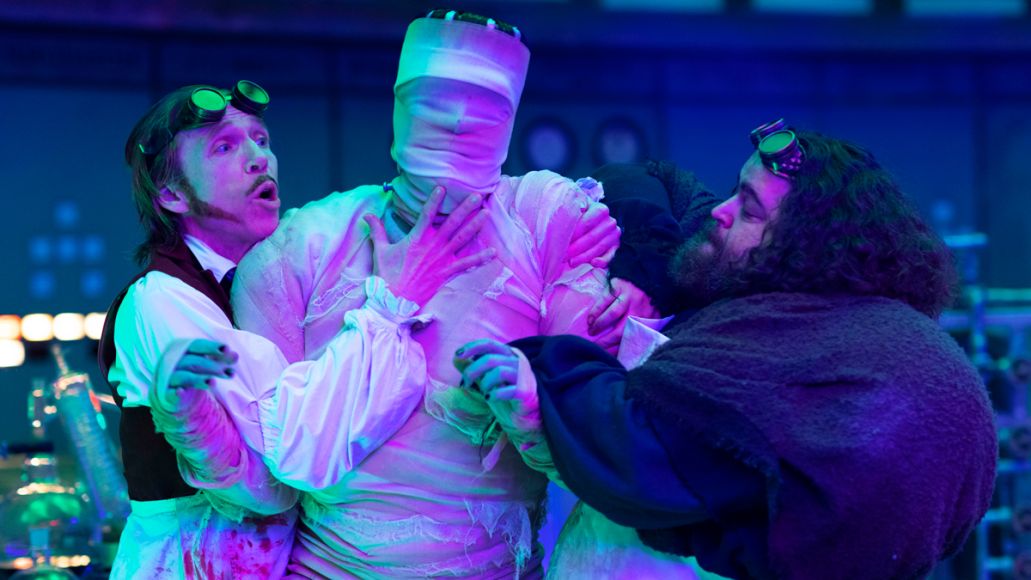 At a time when everything from Archie comics to The Hardy Boys has gotten a dark, gritty reboot, one might expect The Munsters to be as gory as every other Rob Zombie movie. But as a diehard Munsters fan, the director has crafted a loving homage to the family-friendly sitcom. The only time a character curses, he’s on television and gets bleeped. It’s like all Zombie wanted to do was colorize the original series, but he added a whole lot of color. Nearly every scene is bathed in green, purple, or orange light, and The Count’s face has a surprising blue tint to it.

The makeup and prosthetics in The Munsters are remarkable, particularly Roebuck’s — not because he looks like a vampire, but because Zombie has transformed him into a dead ringer for Al Lewis, the star of the original sitcom. Jeff Daniel Phillips has worn heavy makeup for an iconic role before, playing one of the cavemen in the popular GEICO ad campaign as well the short-lived ABC sitcom based on the commercials. And as Herman Munster, Phillips knows how to mug through green facepaint and deliver his constant stream of corny puns with panache.

Veteran Welsh character actor Richard Brake (Game of Thrones, Peaky Blinders) steals just about every scene he’s in as Dr. Henry Augustus Wolfgang, the mad scientist who creates Herman. Jorge Garcia (Lost) plays his hunchback assistant Floop, but Dr. Wolfgang has another non-hunchback assistant named Igor, played by Sylvester McCoy, which honestly seems a little sloppy. (Wolfgang and Floop attempt to give Herman the brain of genius physicist Shelly Von Rathbone, but accidentally get the brain of his brother, comedian Shecky Von Rathbone, and end up with a monster who never stops cracking dad jokes.)

The Verdict: The Munsters is admirably committed to its vision, but it’s a little hard to say who it’s really for. The movie feels just a little too dark and sarcastic for pre-teens, or someone old enough to have watched the series in its original run. And while fans of Rob Zombie’s other movies may appreciate his attention to detail, they may find a bloodless movie full of campy ‘60s sitcom humor a little too tame.

The Munsters doesn’t even go for the most obvious bit of fan service: Zombie’s biggest song was named after The Count’s car from the original series. So it’s a little disappointing that at no point in the movie does anyone slam in the back of his DRAG-U-LA to “Dragula.” Instead, we get Herman and Lily Munster dressing up as Sonny and Cher for an eye-rollingly predictable duet of “I Got You, Babe.”

The original Munsters aired at a time when the Civil Rights movement was transforming America, and one episode featured The Count telling his grandson that “the strength of your character” matters more than what you look like. It’s probably for the best that Zombie’s movie features no earnest “very special episode” moments. But as an extended aesthetic exercise with purposefully cheesy jokes, it might be nice if The Munsters had anything to say, anything at all.

Where to Watch: The Munsters is available now on Blu-ray and DVD and is also streaming on Netflix.