Weyes Blood season is approaching: Natalie Mering’s avant-rock project will return with a new album And In the Darkness, Hearts Aglow, on November 18th, 2022 via Sub Pop. Along with the announcement, Mering has unveiled the record’s lead single “It’s Not Just Me, It’s Everybody,” as well as a batch of 2023 tour dates.

Update — 9/28: Weyes Blood has unveiled an official music video for “It’s Not Just Me, It’s Everybody.” It’s directed by Charlotte Ercoli, and you can check it out below.

And In the Darkness, Hearts Aglow is the second in a trilogy of Weyes Blood albums. While its predecessor Titanic Rising (one of our top albums of 2019) was caught up in the anticipation of impending doom, the new album documents being in the thick of the storm and searching for an escape. “We’re in a fully functional shit show,” Mering says in a press release. “My heart is a glow stick that’s been cracked, lighting up my chest in an explosion of earnestness.” Pre-orders for the record are ongoing.

“It’s Not Just Me, It’s Everybody” explores the fraught nature of connection between people, and feeling lonely even while surrounded by others. “Can’t hold on to much of anything/ With this hole in my hand,” Mering sings, her voice gliding over a gradually-crescendoing piano that calls to mind Tori Amos or early Fiona Apple. “I can’t pretend that we always keep what we find/ Oh, yes, everybody splits apart sometimes.”

After a pair of Los Angeles shows this December, Mering’s tour kicks off in Berlin, Germany on January 28th. After a stint through Europe, she’ll return to the US on February 22nd with a show in Nashville, hitting major cities from coast to coast before the final show in Tulsa on April 2nd. Tickets go on sale September 16th at 10:00 a.m. local time, and you can get yours at Ticketmaster.

Listen to Weyes Blood’s new single “It’s Not Just Me, It’s Everybody” below. Then, keep scrolling to see the album artwork and tracklist for And In the Darkness, Hearts Aglow, as well as all upcoming tour dates.

Since Titanic Rising, Weyes Blood has appeared on Lana Del Rey’s 2021 album Chemtrails Over the Country Club, as well as on Tim Heidecker’s 2020 project Fear of Death.

And In the Darkness, Hearts Aglow Artwork: 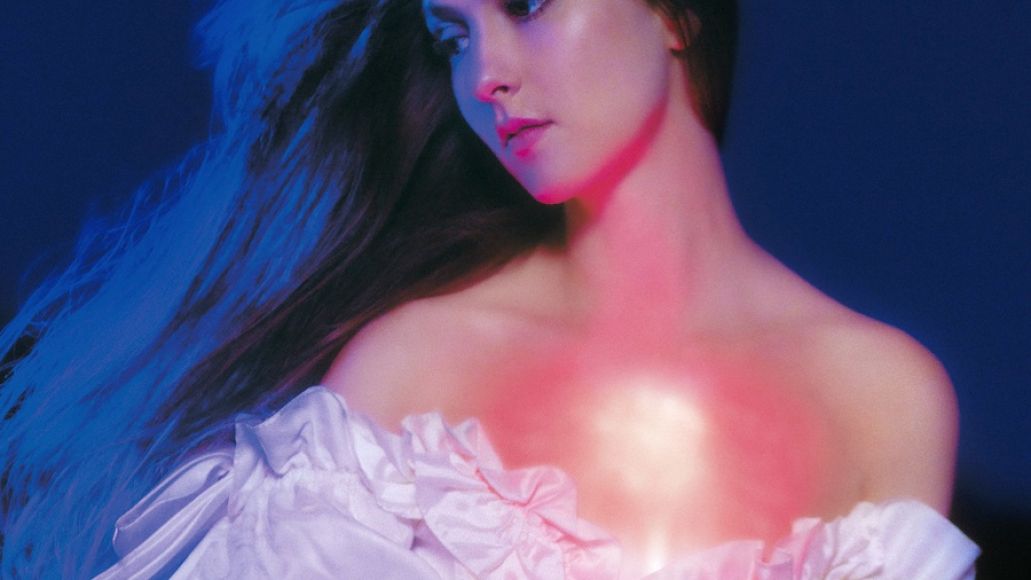 Weyes Blood Announces New Album, Shares "It's Not Just Me, It's Everybody": Stream