After two nights in Seoul, BLACKPINK kicked off the North American leg of their “BORN PINK World Tour” (grab tickets here) with a thunderous show at the American Airlines Center in Dallas, TX on Tuesday (October 25th).

At the first of two shows in Dallas, the K-pop girl group’s impact could be clocked before you even entered the building. Fans were dressed in fashionable outfits reminiscent of the band’s signature style, and once inside the venue, merch lines wrapped around the halls. Attendees were then treated to the pre-show playlist of their dreams: BLACKPINK music videos were on repeat, each one met with cheers as if the band had performed them in person.

When BLACKPINK (comprised of members Jisoo, Jennie, Rosé, and Lisa) went on at 8:11 p.m., the general admission section was only two-thirds full and several empty seats could be spotted before the lights went down. If you were going off of screams alone, however, you wouldn’t know otherwise.

BLACKPINK’s fans, or BLINKS, are intensely dedicated, and their energy filled the room at the American Airlines Center. There were several moments throughout the show where the band would engage in banter, engaging with both one another and the audience with comments about their love for Dallas and their excitement to be back on tour. These moments could barely be heard over the sound of cheers and fans begging for their favorite member to look their way.

As for the music, BLACKPINK is known for energetic and bombastic electropop bangers, and their production design matched that energy. The show featured several costume changes, intricate choreography, a chorus of dancers and a full rock backing band that the girls thanked by name individually halfway through the set. 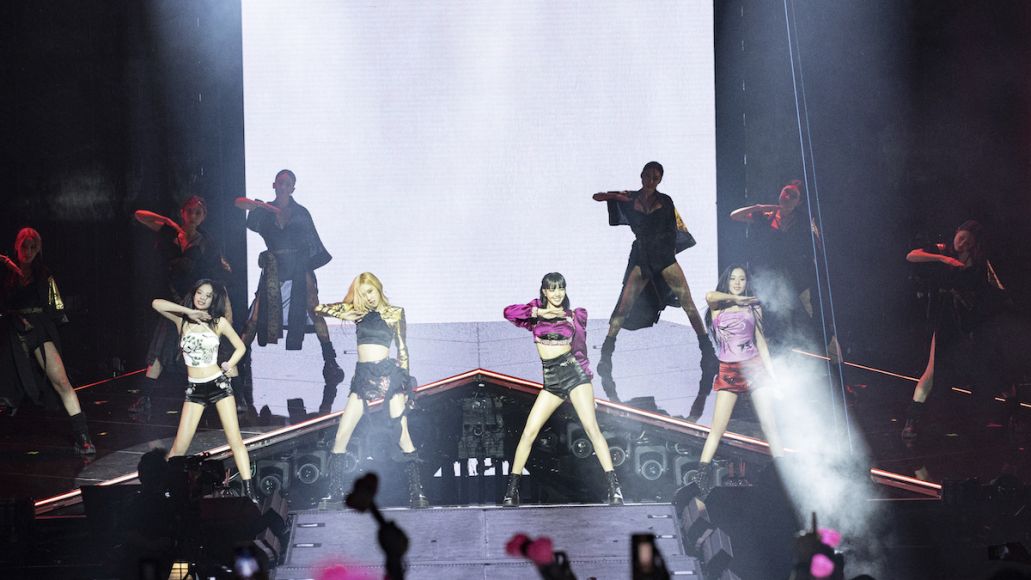 Fans were equipped with lightsticks shaped like hearts, pumping them to the beat of hits like “Kill This Love” and “Pink Venom,” and illuminating the stands with a pink glow. Multiple confetti firings and pyrotechnic moments throughout the night fortified the group’s reputation for having zero subtlety.