On Monday, October 17th, BTS announced their plans to move forward with South Korea’s mandatory military service. After many years of deliberation on part of the South Korean government, the group and label BIGHIT MUISIC confirmed the decision to enlist via social platform Weverse, saying, “BIGHIT MUSIC has focused to the milestone moment when it would be possible to to respect the needs of the country and for these seven healthy young men to serve with their countrymen, and that’s now.”

The group’s recent concert, “BTS Yet to Come In BUSAN,” was viewed by over 50 million people globally. While previous reports indicated that the South Korean government would take the act’s efforts to assist in Busan’s hosting bid in the 2030 World Expo into consideration regarding enlistment, the members of BTS have instead moved forward ahead of any official public decision.

We’ve broken down what comes next for BTS in light of this news below.

South Korean law requires all able-bodied men between the ages of 18 and 35 to serve a period in the country’s military. While this law requires enlistment by the age of 28, a two-year extension, nicknamed the ‘BTS Law,’ was passed in 2020 that allowed the members of BTS and other K-pop groups to defer to the age of 30.

Different branches of the Korean military have different requirements — the shortest length of service is 18 months, while the longest is 21 months.

What order will BTS enlist?

While we don’t yet know the full plans for all seven members, BIGHIT MUSIC did confirm that enlistment would begin with Jin, the oldest member of BTS, saying, “Group member Jin will initiate the process as soon as his schedule for his solo release is concluded at the end of October.” At “BTS Yet to Come In BUSAN,” Jin confirmed that his first major solo release was on the way, following the lead set by bandmate j-hope’s Jack in the Box.

Furthermore, BIGHIT MUSIC stated that “BTS are looking forward to reconvening as a group around 2025 following their service commitment,” indicating that there will be a fair amount of overlap between the members entering the service period.

Is this a hiatus?

Nope! Since the announcement of their “second chapter,” the current phase in their career, BTS has been adamant in communicating that they have plans to continue making music together for a very long time. At the concert in Busan, group leader RM stated, “All seven members have the same thoughts. We will continue to make and perform music if you give us your trust.” Jimin also stated, “It’s not like we only have today. We will continue for 30 years… and even perform when we are 70 years old.”

Similarly, Jin asked the crowd in Busan, “When we plan a concert tour, will you come?”

The statement from BIGHIT MUSIC also ended on an optimistic note: “‘Yet to Come (The Most Beautiful Moment)’ is more than a track from their latest album. It is a promise. There’s much more yet to come in the years ahead from BTS.”

Find the full statement below. 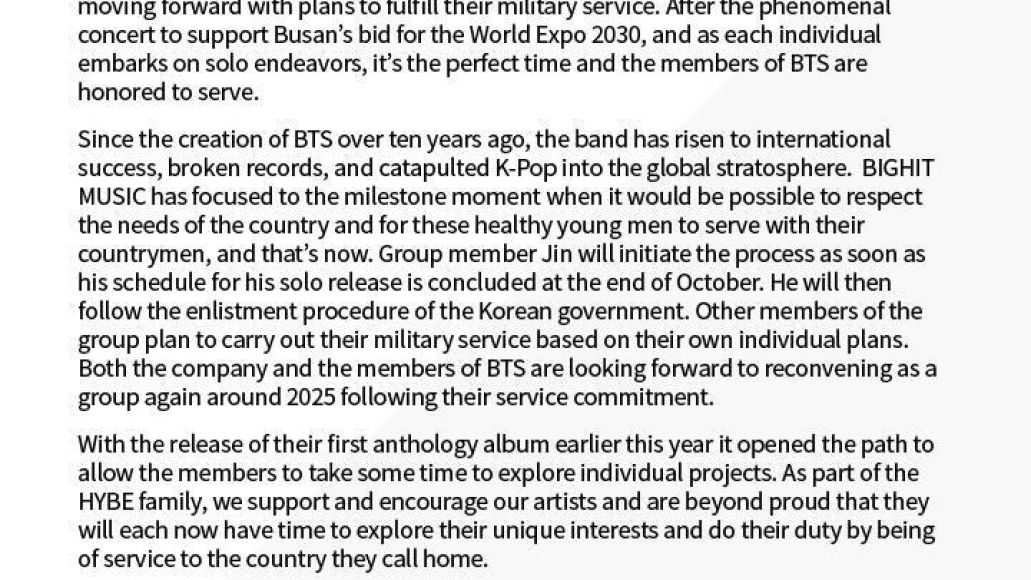 RM Brings the Many Shades of His New Album Indigo to NPR's Tiny Desk: Watch