The following feature was originally published in March 2017, and was last updated in October 2022 for Danny Boyle’s birthday.

If you ever need a solid example of what a truly eclectic filmography looks like, consider the case of Oscar winner Danny Boyle. Ever since Shallow Grave blindsided audiences in 1994, Boyle has dedicated himself to reinvention with every passing feature, jumping from genre to genre and reinventing each one along the way. Whether it’s horror, sci-fi, Bollywood melodrama, “drug films,” survival stories, biopics, or family films, Boyle’s hyperkinetic style and exhilarating visuals make for an oeuvre that’s always distinct, challenging, and decidedly unlike anything else you’ve seen before.

A Morning with Danny Boyle: On Trainspotting, Nostalgia, and Reuniting with Ewan McGregor

As Boyle pairs himself with the Fab Four through his new musical dramedy Yesterday, we’ve decided to walk back through his 20+ years of exciting output and return to the interesting experiments, the memorable digressions, and the handful of all-time greats that the filmmaker has left for audiences. (After much discussion, we decided to omit the opening ceremony of the 2012 London Olympics, one of Boyle’s most lavish directorial outings and certainly the only one of his works in which Daniel Craig parachutes out of a plane with a stuntman dressed as the Queen.)

We’ve dissected the music, the locations, the unforgettable shots, and anything else we could think of to honor one of modern cinema’s most unconventional voices. So kick back, relax, and choose life.

Where the film really fails Boyle is the script; written a decade earlier by British TV writer Joe Ahearne and spiced up a bit by Trainspotting’s John Hodge, Trance feels noticeably like a film whose director has been sitting on the script for years, waiting for a slow period to crank it out. Its mind-bending crime-caper logistics (involving a bevy of secret histories, hidden memories, and several layers of hypnotism) feel out of place and tone-deaf, and even Dawson’s amazing performance can’t wipe away the stink of objectification on her character.

The cartoonish, ridiculous climax, featuring flaming cars flying into the river (and into McAvoy) also comes out of nowhere, leading to a head-scratching denouement that’s too clever for its own good. As a stylish trifle, Trance is diverting enough, but as this list indicates, literally every other Boyle film is better. Feel free to skip it. — Clint Worthington

Press Release: His name is Jack Malik (Himesh Patel), and he just hit the jackpot in a huge, surreal, and profitable game of karaoke. Imagine all the people waking up one day (in 2019) and no longer knowing a singles Beatles song or album. Who are the Fab Four? What’s a Sgt. Pepper? That’s the big “what if?” of Yesterday, where suddenly there were/are no Beatles, and it’s up to one struggling musician to bring those songs back. Through the power of magical realism, only he can remember them all. To the sticky notes and acoustic guitar!

Jack becomes a pop wunderkind overnight, because the rules of a post-Love Actually Richard Curtis screenplay embrace heartfelt absurdities as such. Jack considers the durability of the Beatles when squeezed out for a modern market. Jack has a songwriting face-off with Ed Sheeran, playing himself. Jack wants the world to know just how great the Beatles were, are, and will forever be. Even if the film never really says why.

The Sounds: Hey. Have you heard of the Beatles?

Yesterday managed to snag 20 songs for use in the movie (with 17 used in the final, theatrical cut), and they’re mostly redone in acoustic form by Jack. We’re talking “I Saw Her Standing There,” “Something,” “Here Comes the Sun.” You know, all the feel-goodies and none of the LSD stuff, as the latter doesn’t translate well to a man-and-guitar sound, one might reckon. It also sounds like it was a chore to get these songs. More in a minute.

Location, Location, Location: Geographically, Yesterday is like one of those Hollywood bus tours of celebrity homes. See the famous sites! Penny Lane is featured,(and the filmmakers would have likely been sacked if they hadn’t included it in some capacity. Liverpool is used as a side mission, for Jack to find inspiration in the town that bred history’s biggest pop band. And remember the famous Let It Be rooftop concert in London? 3 Saville Row, atop the Apple Records building? It’s not featured, but there’s a great bit of homage in Suffolk, where Jack plays to something like 6,000 extras atop a hotel.

Key Image: To the point of the aforementioned rooftop show, only the hardest-hearted viewers could dislike Boyle’s visual allusions to the famous “Get Back” performance. Boyle captures the look and feel of the moment with Briton enthusiasm. 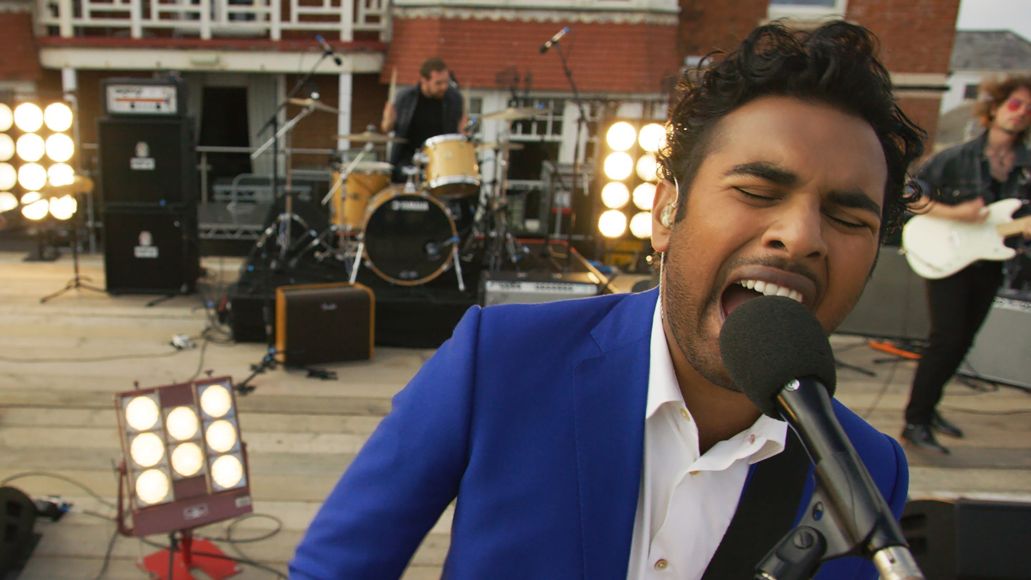 It’s All Too Much: Listen up, Beatle-maniacs. Here’s a brief lesson in music licensing, and how it apparently works in the movies today. Some movies, like the original Shaft or Superfly, will select an artist to draft original music and scoring. Other films, like those of Quentin Tarantino, have soundtracks that are the products of a director making a wishlist and hoping for the best through a music supervisor.

Yesterday is an entirely different beast, starting at a company level. Respected British production company Working Title had to pitch the concept and use of the Beatles to their current holding teams at Apple Records and Sony. According to Boyle, the deal allowed for tinkering with song selections up to the last minute, and it factored in as a heavy percentage of the upfront budget.

Boyle sent letters to Paul, Ringo, Yoko Ono, and Olivia Harrison outlining the project and his intended usage of Beatles numbers. Every living Beatle connection approved, probably because Billboard estimates that it likely cost $10 million to clear the music for this. So everybody won, kind of. (It also doesn’t sound like Paul or Yoko wrote back, either.)

Anyways, remember this at the end of the film when [SPOILER] Jack gives the Beatles’ songs away to the public, fearing a world without their music. It’s free in the movies, but pricey and complicated in reality. [END SPOILER]

Cold play: Chris Martin was originally set for the Sheeran cameo, but scheduling conflicts forced the producers’ hands. At the risk of coming off derogatory, Martin would’ve been preferable over Ed “has a tattoo of ketchup on his arm” Sheeran. Sorry, Ed.

Analysis: This is a Danny Boyle film in which the auteur seems to sit at the third level of authorship. It’s a Beatles fantasy film, and subsequent advertisement for their catalog. It’s a Richard Curtis pitch about a world without Liverpool’s finest. And then it’s a film directed by Danny Boyle, long after allowed discussions of ‘appropriate’ and ‘tasteful’ use and interpretation of Beatles songs were finished.

As a matter of fact, it’s difficult to find much of Boyle in this movie, and it’s a shame. The gifted visualist is buried under conceit. At its best, Yesterday is fine, if sickly sweet. At worst, again, a glorified ad benefiting the owners of the Beatles’ work. Hello, Beatles movie. Goodbye, any meaningful input from Danny Boyle. We can’t work this out, it’s a dud. – Blake Goble

Every Danny Boyle Film Ranked From Worst to Best