Members of Judas Priest, Pantera, and Rainbow have formed a new supergroup called Elegant Weapons, and have announced their debut album, Horns for a Halo, arriving in Spring 2023 via Nuclear Blast.

“It’s exciting to be part of a label like Nuclear Blast that has such a rich history and level of respect among fans and the music industry,” said Faulkner in a press announcement. “Monte Conner [Nuclear Blast VP A&R] knows Andy Sneap well, and Andy has always held Monte and label in very high regard. Monte has loved the record from the very early demo stages. It’s very valuable and important to me that the label I sign with understand and connect with the music.”

Added Faulkner: “This record represents for me more of my DNA as a guitar player and a songwriter. Heavy, but moving slightly outside the realms of ‘heavy metal.’ Those roots are obvious, but I wanted to reach in a bit and see what else came out that wasn’t necessarily ‘expected.’”

The guitarist — who appears to be the de-facto band leader — goes on to describe Elegant Weapons’ sound as “a mix of Jimi Hendrix, Priest, Sabbath, solo Ozzy, and Black Label Society.” He also called the quartet his “dream lineup.”

“I’ve always wanted to make a record with Scott [Travis] outside of Priest,” Faulkner said. “Add to that Rex Brown’s unmistakable tone and attitude is something special. Having those guys as the rhythm section is a guitar players dream. The icing on the cake was Ronnie Romero. One of the new breed of instantly classic vocalists, Ronnie brought a character and a swagger to the songs that is instantly iconic, making these songs his own.”

Although no music or tracklist for Horns for a Halo has yet been unveiled, fans can expect further announcements from the supergroup leading up to the LP’s spring 2023 release date. Concept artwork of the band’s lineup by Claudio Bergamin can be seen below.

Meanwhile, Faulkner and Travis are currently on the road with Judas Priest for the fall US leg of their “50 Heavy Metal Years” tour. The outing continues tonight (October 25th) in Waukegan, Illinois, and runs through November 29th in Houston. Pick up tickets via Ticketmaster. 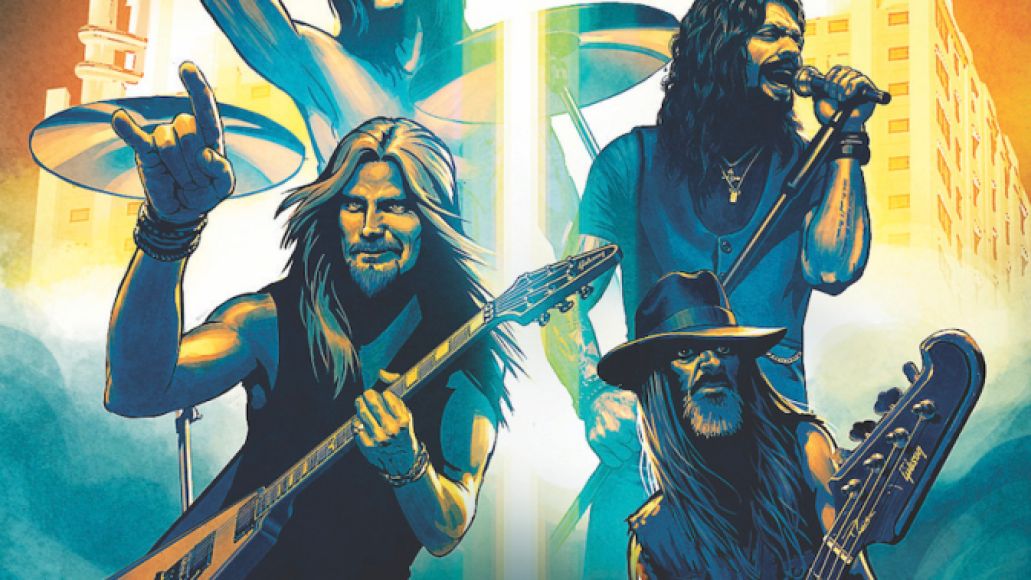