After an eleventh-hour cancellation on Saturday, October 22nd for high winds just moments before the gates were set to open, the debut edition of the When We Were Young festival blasted off Sunday, October 23rd, welcoming 60,000 emo and punk fans with a stacked lineup of 65 acts.

The black-clad masses poured inside the Las Vegas Festival Grounds, previously home to hip-hop fest Day N Vegas, around 10:00 a.m., while winds continued to gust and the temperatures dropped well below forecast.

Located at the corner of Sahara Avenue and Las Vegas Boulevard, a prime spot in the corridor between the Strip and Downtown, the famed Bonanza Gift Shop served as the backdrop of the dual Pink and Black stages, which switched off headlining acts until a stunning closing set by My Chemical Romance.

So how did the fest — which had been shaping up to be one of the most highly-anticipated music events of 2022, with the 2023 lineup already announced before it even happened — go?

Consequence was on the ground all day Sunday, and we’ve got the full report below. (Plus, check out our gallery of exclusive photos here.) You can also grab tickets to the final day on October 29th, 2022 here.

A long pink lawn led attendees into the event and became a picnic area throughout the brisk afternoon for those grabbing tacos, corndogs and churros before catching their favorite band. It’s this kind of celebratory, happy and convivial environment that we all love in a festival. The good vibes were, to coin a term, emo-tional.

Hoping to alleviate the disappointment of the fans who came ready to rock Saturday and were turned away because of the weather, bands clamored to find any available stage in which to play pop-up concerts. On Main Street in the Las Vegas Arts District, just a few miles from the Festival Grounds, concertgoers lined up for hours to see The All-American Rejects at Soul Belly BBQ. Red Jumpsuit Apparatus and Hawthorne Heights hit The Strat. Elsewhere, Anthony Green, Senses Fail, Thursday and Bayside played the Sand Dollar at Plaza, while Bring Me the Horizon teamed up with Knocked Loose and Landon Barker at Palms.

On the grounds, ironic emo T-shirts abounded. With a crowd that undoubtedly bought out every Hot Topic west of the Mississippi, the WWWY fest audience brought their A-plus graphic-tee game. Some favorites included “Elder Emo,” “Emo’s Not Dead,” “Sad As Fuck” and the contradictory “Not Sad.” 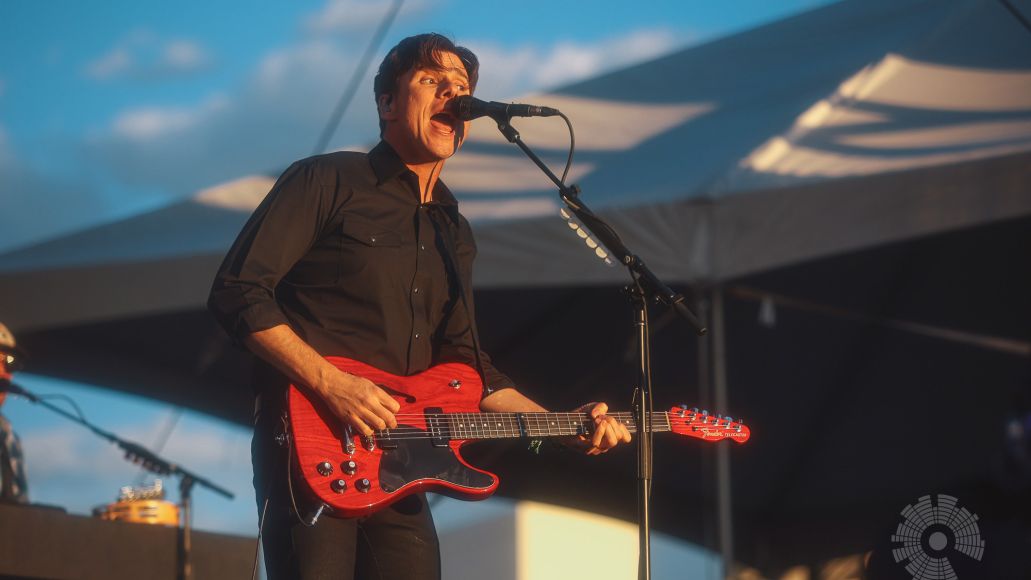 Notably, it seemed that emo and punk fans have chilled out — the crowd was extremely mellow, especially during the earlier hours. Maybe it was because of hangovers from the popup shows that many attended in lieu of Saturday’s festival, or maybe it was just age — but it left many simply vibing to the music without injury.

The Linda Lindas opened the festival, and the punk group (whose ages range from 12-18) immediately set the tone. With songs like “Racist, Sexist Boy” and “Vote,” they captivated the audience, channeling all the nuances of their anti-establishment ancestors. Other standouts were “Nino,” a song about vocalist and guitarist Bela Salazar’s cat Nino, and their cover of The Go-Go’s “Tonite.” Fifteen-year-old guitarist and vocalist Lucia de la Garza closed the set by saying, “It’s a strange thing that’s happening, but we are very happy to be part of it even if we are young.”

Next, English rock band Wolf Alice, fronted by Ellie Rowsell, ripped through their set, which included “Smile,” “You’re a Germ,” “Formidable Cool” and “Delicious Things.” For what served as the last day of their American tour, Roswell dressed in black leather, bouncing back and forth between angelic operatic vocals and wolf-like growls.

Elsewhere, Avril Lavigne went head-to-head with a set time that conflicted with The All-American Rejects. However, she asserted that hers was the stage to be at by bringing out All Time Low to cover blink-182’s “All The Small Things.” (ICYMI, blink will be headlining the already sold-out 2023 WWWY.) Then there was Bring Me the Horizon’s Oli Sykes, who catapulted himself into the crowd, proclaiming it the “craziest festival ever with all the bands that made me want to be a singer.” 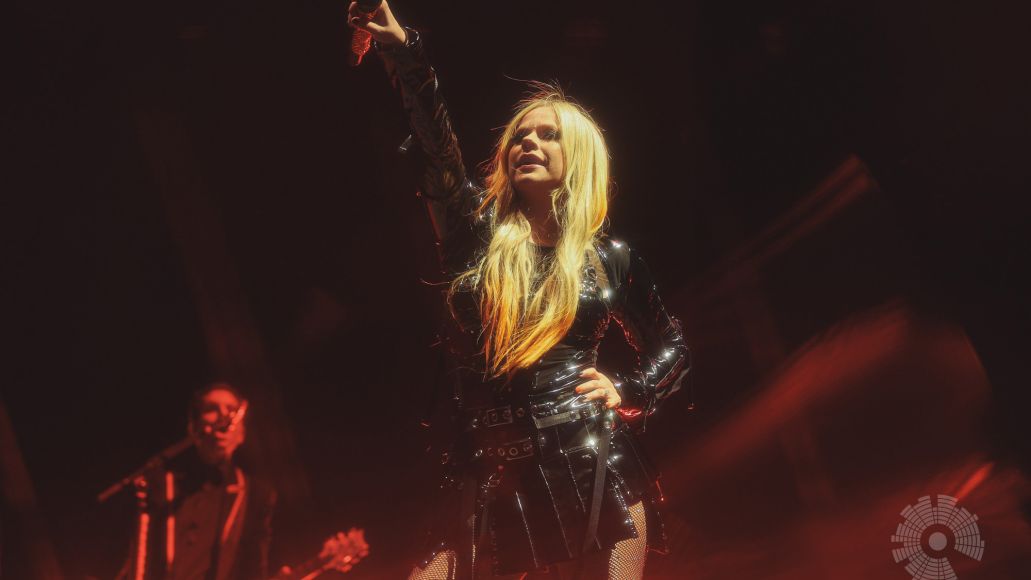 One of the highlights of the day was, naturally, the headlining set from Paramore. Hayley Williams had a lot to say both about the genre and the world. “It’s a lot of emo in one space,” she told the crowd. Wearing weather-appropriate arm warmers and an “End of World” shirt, Williams led Paramore through a set of dozen hits — including one they have never played before in concert: “All I Wanted” from 2009’s Brand New Eyes.

When We Were Young festival-goers had the opportunity to witness something truly special on Sunday night: Paramore’s first live performance of their 2009 fan-favorite “All I Wanted” 🧡 (🎥: tinyhotopicbitch on Instagram) #paramore #hayleywilliams #whenwewereyoungfest #wwwyfest #livemusic

Williams called out all those in the scene who make the genre unfriendly and unaccepting of girls, the queer community and people of color. “When Paramore came onto the scene, roughly around 2005, the scene was not always a safe place to be if you were different — if you were a young woman, if you were a person of color, if you were queer — and that’s really fucked up if you think about it,” she said. “I’ve had my fill of letting older people — especially older men — tell me what punk rock is and tell me what punk rock is not. Just today, there was a crusty old fuck on the internet saying that punk was supposed to be anti-establishment. Well it is. And actually, I can think of nothing more anti-establishment than young women, than people of color, and the queer community.” 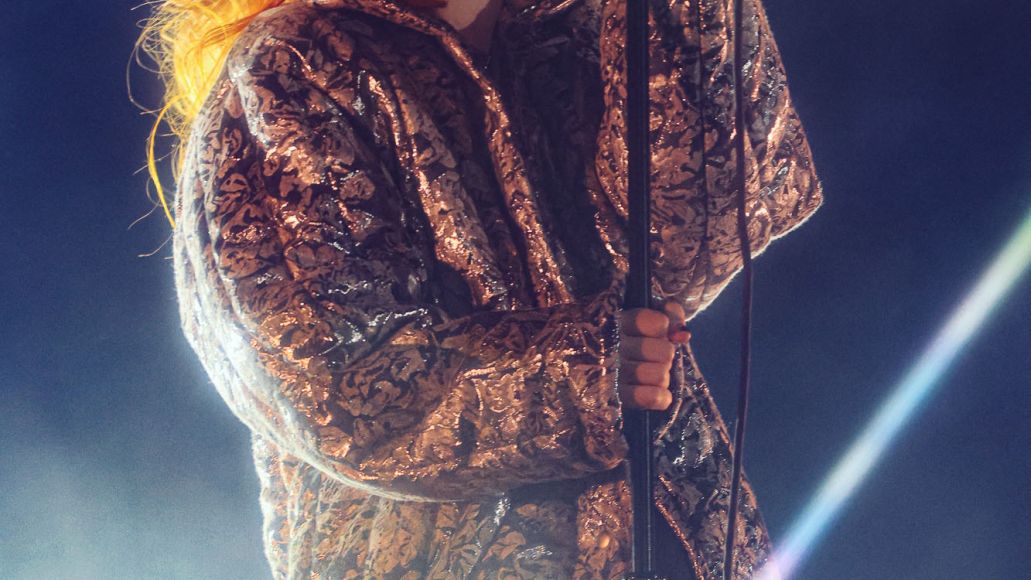 Saturday’s cancellation certainly ranked as the top bummer. “Yesterday was kind of a bummer,” was overheard both from the stage and the audience multiple times. Nothing ruins momentum like a weather delay, but alas, the National Weather Service and Las Vegas Metro Police Department make the rules to keep everyone safe. “This was not a decision that came lightly. We know many of you traveled to the area to have a spectacular day with your favorite bands and have been looking forward to this day for months. We were equally as excited and are devastated to have to share this news,” read the cancellation notice from Saturday.

On the grounds Sunday, fans were also overheard talking about the many set conflicts. Getting 65 bands through a venue in one day is no easy feat. Set times were short and quick, leaving very little margin for lateness or technical difficulties.