Metallica are gearing up for their “M72 World Tour,” which will span 22 cities across two continents over 2023 and 2024, and tickets are arriving soon. The global trek features a two-night visit to each city for a “No Repeat Weekend” that promises unique setlists and opening acts at every show. The two-year engagement comes in support of their new LP, 72 Seasons, which will arrive on April 14th, 2023.

What Is Metallica’s Next Tour?

The “M72 World Tour” will feature two legs in both Europe and North America between 2023 and 2024, with two shows in every city. The initial European leg launches in Amsterdam on April 27th, then hops to Paris and Hamburg. It closes in Gothenburg, Sweden on June 18th.

Metallica opens their first North American stretch at East Rutherford, New Jersey’s MetLife Stadium on August 4th. They travel to Montreal for two nights beginning August 11th, then jet to Arlington, Texas for shows on August 18th and 20th. They headline Inglewood, California’s SoFi Stadium on August 25th and 27th, then open the next month in Glendale, Arizona. After a double-header in St. Louis, the band will deliver their final 2023 performances in Detroit on November 10th and 12th.

The tour resumes for a 2024 European leg starting in Munich on May 24th. It routes the band through Helsinki, Finland; Copenhagen, Denmark; and Warsaw, Poland, then wraps in Madrid on July 14th.

The band’s 2024 North American tour begins in Chicago on August 9th. They’ll perform in Minneapolis the following weekend, then head back to Canada for two shows in Edmonton starting August 23rd. Following a stint at Seattle’s Lumen Field, the group will spend two weekends in Mexico City, playing four shows at the Foro Sol between September 20th and 29th.

Who Is Opening for Metallica on Tour?

Metallica will be joined on the “M72 World Tour” by a rotating cast of support acts that includes Pantera, Greta Van Fleet, Volbeat, Architects, Five Finger Death Punch, Ice Nine Kills and Mammoth WVH. For the North American shows, Pantera and Mammoth WVH will open the first night in each city, while Five Finger Death Punch and Ice Nine Kills will open the second night.

All pre-sale tickets will be packaged as two-day bundles per city. Tickets for individual dates will go up for grabs on January 20th, 2023.

See Metallica’s full list of tour dates below, and get tickets to all of their upcoming concerts here. 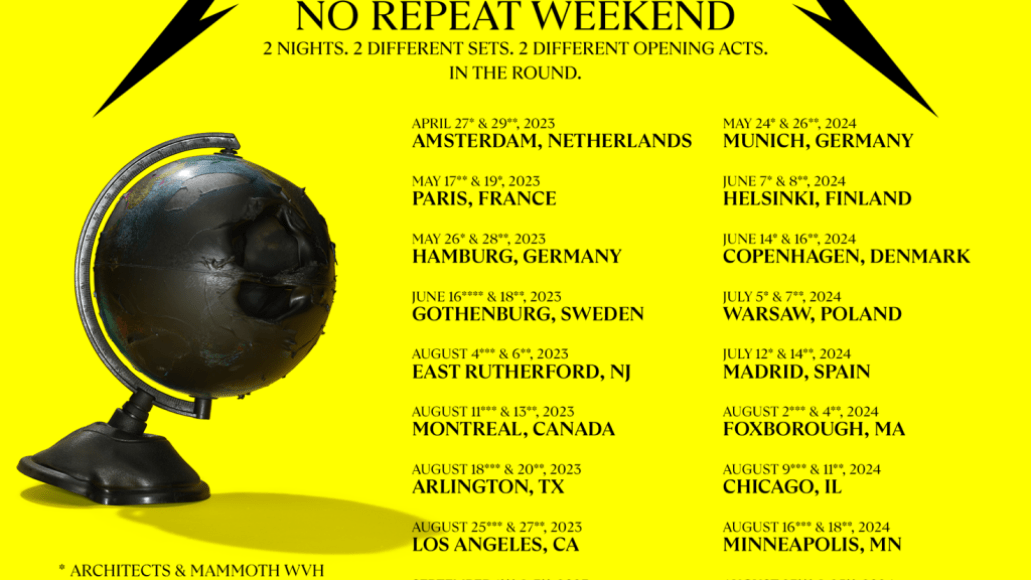