On Sunday, November 13th, Joe Walsh will present the sixth iteration of VetsAid, an annual one-day music festival that raises funds for veterans and their families. This year sees acts like Dave Grohl, Nine Inch Nails, The Black Keys, and The Breeders heading to Columbus, Ohio for the event, as well as a recently-reunited James Gang.

It all sounds great, but to the untrained eye, it might seem a bit random. It’s wonderful Walsh has such a strong charitable streak within him, but what does he have to do with veterans? Why these artists? And, perhaps most confounding, why Ohio?

Well, as it turns out, there are invisible threads connecting each aspect of the VetsAid 2022, including military associations, the multigenerational rock and roll community, and the unavoidable presence of the buckeye state.

It starts in Walsh’s childhood. At the age of two, his father, a flight instructor in the United States Air Force, died in active duty. “I had a stepfather and he had my back and I love him, but I grew up kind of without a dad,” Walsh remembers. “Everybody would be at school and their dad was there and mine wasn’t.”

Ever since, he’s understandably felt a deep kinship with military families around the nation, doing what he can throughout his career to support veterans and their loved ones. VetsAid alone has raised over two million dollars towards such goals.

“I decided I could make a difference helping and there’s so many ways that vets need help,” Walsh tells Consequence over Zoom. “I think they should just put a billion dollars aside when they decide to do a war for when they come back because the transition back to civilian life is almost too much of a mountain to climb.”

From his solo career to his time with The Eagles to the present day, Walsh’s actions of support towards American veterans are — and always have been — clear, passionate, and unobstructed. All of which explains the birth of VetsAid, but why these artists, why get the James Gang back together, and why, for the love of god, spotlight Ohio?

Well, Walsh’s career began in Ohio. In the late ’60s, he lived in Kent and played guitar for a local act called The Measles (a band name he now “[doesn’t] like to brag about”). At the same time, a band from Cleveland by the name of James Gang parted ways with their guitar player. Through genius, luck, or some combination of the two, the remaining members drafted Walsh into the gang to fill the vacancy. “I had some big shoes to fill and also had to learn how to sing lead and play lead at the same time,” Walsh says. But, with some help from another icon of the time, he was able to develop a style of his own.

“Luckily, we played some shows with The Who, and that turned into a longtime friendship,” Walsh explains. “In a three-piece band, it’s kind of hard to navigate. [Pete Townshend] showed me how to play. We call it lead rhythm, where you play rhythm guitar and lead at the same time and just kind of wander back and forth. And that’s the secret of a three-piece band.”

The modest Cleveland power trio, while never hitting the sustained commercial heights of a band like The Who, went on to make an undeniable mark on rock history. From essential tracks like “Funk #49” or “Walk Away” to deeper cuts like “The Bomber,” James Gang’s blend of funk, blues, and rock made casual fans of just about everyone and hardcore fans out of those in the know.

Of those hardcore fans was the late Taylor Hawkins, who was often seen wearing James Gang merchandise during performances with the Foo Fighters or Chevy Metal. So, even though James Gang hadn’t performed together in over a decade, the opportunity to celebrate the life of Hawkins seemed like the perfect opportunity to get back on stage.

“Taylor Hawkins, his favorite band in the whole world was the James Gang. He told me that many times,” Walsh says of their performance at both the London and Los Angeles tribute shows. “And when Dave Grohl decided to do some concerts in memory of Taylor, I thought about it and said, ‘What if I get the James Gang together to be part of this?’ And he thought that was the best idea he’d heard in a long time.”

For Walsh, the event proved to be more than a simple reunion or run-of-the-mill tribute show. He describes the experience backstage like it was a time machine transporting him back to rock and roll’s past. It was an organic snapshot of classic rock’s heyday in the name of a musician who deserved nothing less.

“It was a beautiful thing. The greenroom backstage was just full of everybody,” Walsh says. “A lot of us had known each other for years and years and years, and the whole community got together in remembrance of Taylor.”

“In the old days when you played outside and you had three or four headliners, backstage used to be like that. You would have everybody hanging out backstage and trading stories and making plans,” he adds. “And those days are gone now. But [the tribute show] reminded me of that. Taylor’s backstage scene was a great collection of artists getting together, and a lot of us met each other for the first time. And there’s a hole in my heart and Taylor’s missing but I’m grateful for the time he was in my life.”

Walsh looks to capture the same feeling for James Gang’s upcoming set at VetsAid, especially as it’s branded as their final show, or as the event’s promotion puts it, “one last ride.” On that topic, however, Walsh presents a different perspective.

At the very least, November 13th is the last show James Gang has on the books at the moment. It’s also a concert that sees the Cleveland natives joined by a lineup entirely made up of artists with strong links to Ohio. Dave Grohl was born in Warren, Ohio, Nine Inch Nails also hailed from Cleveland, The Black Keys come from Akron, and The Breeders call Dayton home.

The show is set to be all Ohio all the time, which wraps up the great bow of VetsAid 2022. What is, on the surface, a simple charity event, is really a night held together by the intersection of the communities Joe Walsh has been a part of for decades: the rock community, the Ohio community, and the Gold Star Family community. Each VetsAid has been special, but talking to Walsh, it’s clear there’s an extra sense of completeness to this year’s edition.

“I think everybody that’s playing is glad we’re doing it because this will never happen again,” Walsh says. “It’s all Ohio for Ohio, and I’m glad that it’s my fault.” 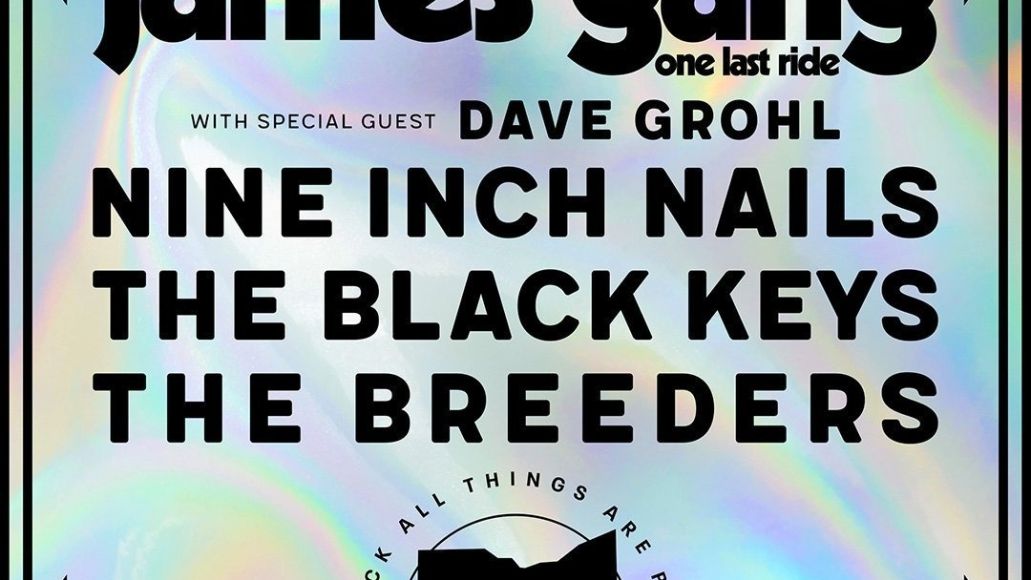