Nas and 21 Savage have released the new joint single “One Mic, One Gun,” putting aside any traces of beef after 21 publicly questioned his elder’s relevancy two weeks ago.

With a bombastic beat by Hit-Boy, the song sounds like an extension of Nas and Hit-Boy’s recently completed King’s Disease trilogy. The title fittingly references Nas’ 2001 Stillmatic staple “One Mic,” which was written in the heat of his infamous feud with Jay-Z, but the tone reflects his enlightened perspective over two decades later.

21 immediately pays homage by shouting out the project in his initial verse, then confronts his own comments with the line, “When you turn to legend, no such thing as relevance.” The Queens rapper does his part to remind everyone of his legacy, saying in the hook, “I opened a lane for my era/ I’m goated/ They gavе me the crown,” while also addressing more pressing concerns like suffering a home invasion in November as well as the fallout between 21 Savage and Kodak Black after the former’s controversial comments, telling them to “be big for the South.” Stream “One Mic, One Gun” below.

The brief stand-off between the rappers began on November 13th when 21 Savage hopped on a Clubhouse forum titled “Is Nas the Greatest Rapper or What?” and told guests, “He’s not relevant. He just has a loyal ass fan base. He just has a loyal fan base and he still make good-ass music.” He quickly issued a clarification the next day via Twitter, saying, “I would never disrespect nas or any legend who paved the way for me y’all be tryna take stuff and run with it.”

Nas did not engage with the slight, but posted a message the day before the single’s release via Instagram, saying, “Only way we moving is with love, respect and unity. The foundational principles of hip hop. Excited to collaborate with my young brother and I hope more artist use turbulent moments and turn them into a time to make new art. That’s what it’s about.”

21 Savage also recently drew the ire of Condé Nast after he and Drake used a fake Vogue magazine cover to promote their collaborative album, Her Loss.

“One Mic, One Gun” Single Artwork: 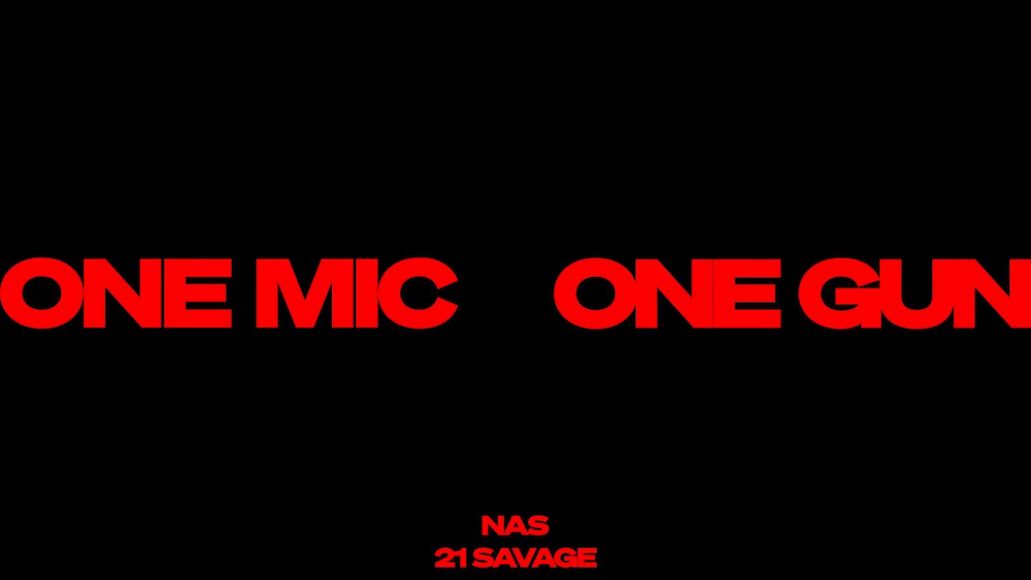