After Swifties battled — and ultimately lost — a vicious war with Ticketmaster earlier this week on their quest for access to “The Eras Tour,”  Taylor Swift has issued a statement on the resulting chaos that led to the cancelation of general ticket on-sale.

“It goes without saying that I’m extremely protective of my fans. We’ve been doing this for decades together and over the years, I’ve brought so many elements of my career in house. I’ve done this SPECIFICALLY to improve the quality of my fans’ experience by doing it myself with my team who care as much about my fans as I do,” Swift wrote in a post on her Instagram story November 18th. “It’s really difficult for me to trust an outside entity with these relationships and loyalties, and excruciating for me to just watch mistakes happen with no recourse.”

“There are a multitude of reasons why people had such a hard time trying to get tickets and I’m trying to figure out how this situation can be improved moving forward,” Swift added. “It’s truly amazing that 2.4 million people got tickets, but it really pisses me off that a lot of them feel like they went through several bear attacks to get them.”

Addressing those fans who didn’t get tickets, Swift said, “All I can say is that my hope is to provide more opportunities for us to all get together and sing these songs. Thank you for wanting to be there. You have no idea how much that means.”

On November 15th, an estimated 14 million people attempted to access the Ticketmaster website all at once just for pre-sale access to Swift’s “The Eras Tour.” The “historically unprecedented demand” caused Ticketmaster to crash, and left some users being told they needed to wait up to five days for a response, Bloomberg reported.

According to Ticketmaster (via Variety), 1.5 million fans were able to instantly buy tickets, while an additional 2 million were sent to a waitlist. That only accounts for 3.5 million of the reported 14 million who attempted to buy tickets that day.

Ticketmaster explained that they prepared for these numbers because “historically, 40% of invited fans actually show up and buy tickets, and most purchase an average of 3 tickets. However, this time the staggering number of bot attacks as well as fans who didn’t have invite codes drove unprecedented traffic on our site, resulting in 3.5 billion total system requests – 4x our previous peak.”

Update – November 19th: Ticketmaster apologized to Swift and her fans in an amended statement posted late Friday evening. “We strive to make ticket buying as easy as possible for fans, but that hasn’t been the case for many people trying to buy tickets for Taylor Swift | The Eras Tour. First, we want to apologize to Taylor and all of her fans – especially those who had a terrible experience trying to purchase tickets.” The rest of the statement comprises a previously released explanation detailing the sheer volume of fans who visited the site attempting to purchase tickets.

Though Ticketmaster has yet to face any official legal recourse over the sale, Tennessee Attorney General Jonathan Skrmetti is investigating whether antitrust violations “could be an issue.” See Swift’s full response below.

In addition to making Ticketmaster history, Swift’s new album Midnights has broken a whopping 73 records (last time we counted). Midnights made Swift the only artist to have five albums debut with over 1 million units sold in their first week in US Nielsen history. It also moved 1.578 million units, behind only Adele’s 25 for the biggest debut by a female artist in Billboard history. 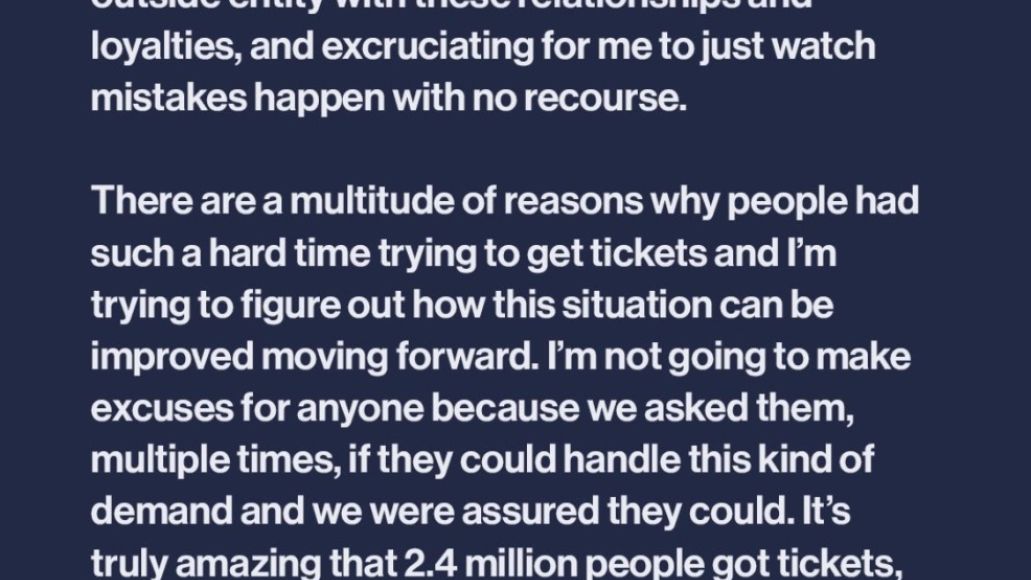 Taylor Swift Issues Statement on Ticket On-Sale Shitshow: “It Really Pisses Me Off”