Leave it to The 1975 to call their new tour “The 1975 at Their Very Best.” After all, this is a band that does not shy away from hyperbole, theatrics, or reminding us how much they love being The 1975. In fact, they don’t really shy away from anything. Their new show is, without a doubt, their finest yet, and witnessing them headline New York City’s Madison Square Garden last night (November 7th) was watching a band that is truly in their prime.

“The thing about us, ladies and gentlemen,” frontman Matty Healy reminded the audience over an hour into the show, “we just keep getting better.” The audience roared in agreement, and the band immediately segued into the fan-favorite “It’s Not Living (If It’s Not with You).”

There was a palpable confidence emanating from the band last night, and especially from Healy: Throughout the show, he chain-smoked cigarettes, took dozens of swigs from not one but two flasks onstage, ate raw meat, sang a song on the roof(?), did pushups in front of a television before crawling inside it, certainly touched his… area more than once (“Sorry if you brought your Dad to the show and I was touching my dick,” said Healy after the intermission, “That’s your fault for bringing your Dad”).

But even before The 1975 took the stage, the tone for the evening was set perfectly by the band’s label mates and chosen opener for the tour: BLACKSTARKIDS. Having seen the trio open for fellow Dirty Hit artist beabadoobee last year, I was no stranger to the band’s explosive energy — but that doesn’t always translate into a massive arena like Madison Square Garden.

It’s a tough task for any arena opener, especially when they begin their set with the house only half full, but BLACKSTARKIDS arrived with a visceral blast of energy. All three members of the band looked like they were having the time of their lives on that stage, and it proved to be a rousing and endearing set. If you’re planning on attending “The 1975 at Their Very Best” (and you can get tickets here, if so), be sure not to miss BLACKSTARKIDS — they might just be your new favorite band.

When BLACKSTARKIDS left the stage and The 1975 arrived, the curtain dropped and revealed a large set that resembled a house, complete with furniture, windows, separate rooms, a roof, and a dazzling spiral staircase. The show followed two fairly concrete acts of 12 songs each: The first act saw the band playing nearly every song from their brand new LP, Being Funny in a Foreign Language, while the second act was all killer, no filler hits from the band’s other four studio albums. 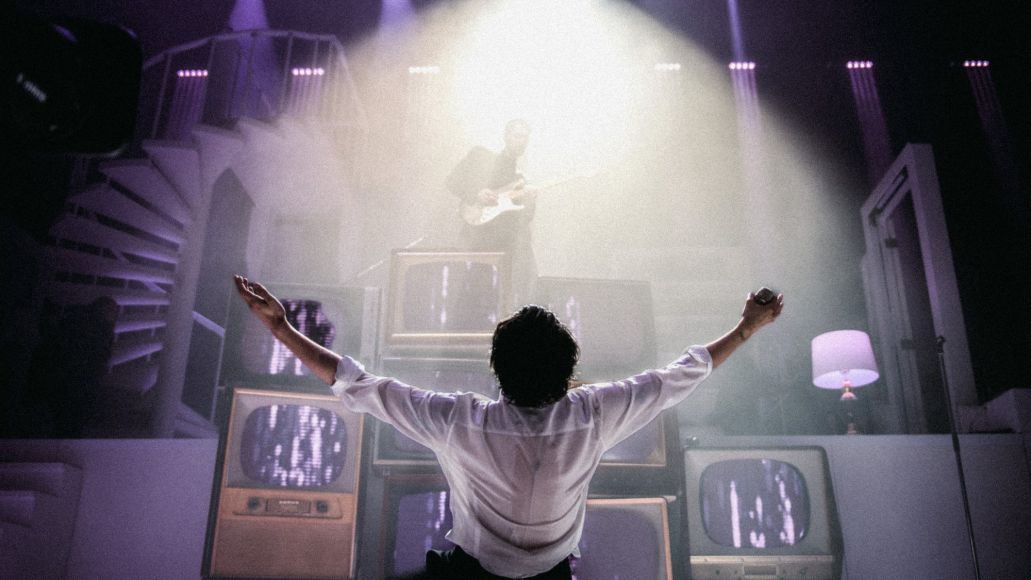 The 1975, photo by Jordan Curtis Hughes

The 1975 Were Truly "At Their Very Best" at Madison Square Garden in NYC: Recap