Welcome to Rockville Festival has revealed its 2023 lineup, and it’s absolutely jam-packed with many of the biggest names in rock and metal. The four-day fest features headliners Pantera, Tool, Slipknot, and Avenged Sevenfold, plus dozens of other notable acts.

Taking place May 18th-21st at the Daytona International Speedway in Daytona Beach, Florida, the 2023 edition of Welcome to Rockville also boasts such acts as Deftones, Queens of the Stone Age, Godsmack, Rob Zombie, Evanescence, Alice Cooper, Incubus, The Mars Volta, and more. Four-day passes are available via the official festival site.

Slipknot will headline on Thursday (May 18th), and will be joined by Rob Zombie, QOTSA, Puscifer, Trivium, Bullet for My Valentine, Black Veil Brides, Suicidal Tendencies, Avatar, Converge, Band-Maid, Bloodywood, and more.

Avenged Sevenfold, who haven’t played a show since 2018, will top a bill on Friday (May 19th) that includes Evanescence, Hardy, I Prevail, Motionless In White, Asking Alexandria, Sleeping with Sirens, Badflower, Ayron Jones, Memphis May Fire, and others.

And Tool will close out the fest on Sunday (May 21st), wrapping up a bill that also features Deftones, Incubus, The Mars Volta, Coheed and Cambria, Pennywise, Ghostemane, Grandson, Sueco, Filter, Deafheaven, Anti-Flag, Senses Fail, Nova Twins, and others.

“We are so excited to be bringing this fantastic lineup to Welcome To Rockville,” stated Danny Wimmer, founder of promoter Danny Wimmer Presents. “Our fans have been wanting Pantera and along with one of Avenged Sevenfold’s first live shows in five years, crowd favorite Slipknot, AND one of the greatest rock bands of all time, Tool, we are delivering a jam-packed weekend to the ‘The World Center of Rock.’ Can’t wait to see everyone in May!”

See the complete lineup in the Welcome to Rockville festival poster below, and pick up passes here. 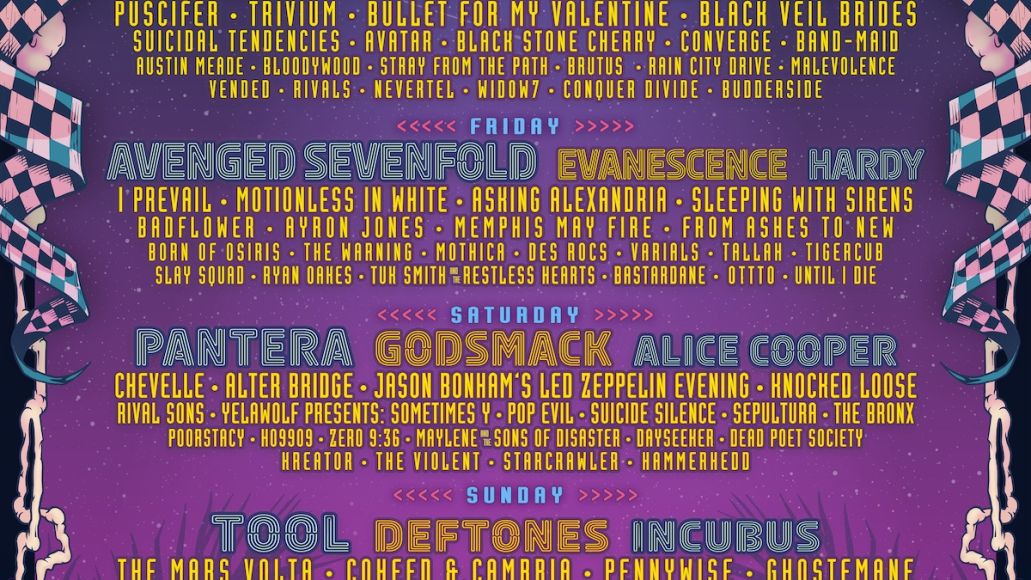