Our 2022 Annual Report continues with the announcement of Daniels (Daniel Kwan and Daniel Scheinert) as our Filmmakers of the Year. As the year winds down, stay tuned for more awards, lists, and articles about the best music, film, and TV of 2022. You can find it all in one place here.

About two-thirds into Everything Everywhere All at Once, there’s a dizzying sequence that takes the viewer flashing rapidly through vignettes of parallel universes. Finally, there’s a moment of stillness on a cliffside, where two rocks have a conversation (via subtitles, for the audience’s sake). The moment from the film has since heavily circulated social media, and the memorable frame clearly resonated with audiences.

“It says a lot about us as a culture that we are such broken people traumatized by the past 10 years that a shot of two rocks could resonate so much, because what it represents is a moment of quiet,” says Daniel Kwan, 50% of the writer-director duo behind the film. “The fact that it resonates is a little sad, but also really beautiful.”

Everything Everywhere All at Once is the second feature film by Consequence’s 2022 Filmmakers of the Year Daniel Kwan and Daniel Scheinert — known collectively as Daniels — following 2016’s similarly quirky and idiosyncratic Swiss Army Man. For the pair, who got their start in the music video world, visuals are incredibly important to their form of storytelling — they’ll often start from a visual concept and work their way backwards. Scheinert describes their films as “puzzle projects,” and finding the right combination of story beats and visuals is paramount. “This one started with chasing the too-muchness of being alive right now,” he explains.

Recalls Kwan, “The first image that got me really excited about this whole thing was the image of a character screaming as they flash — every frame a different image, a different universe.” It’s a shot that was, in fact, brought to life in the final version of Everything Everywhere All at Once, prompting the visual effects team to cheer the first time they saw it completed. “I remember the first time we watched it on the big screen, we were all just like, ‘Oh, it worked,'” says Scheinert. 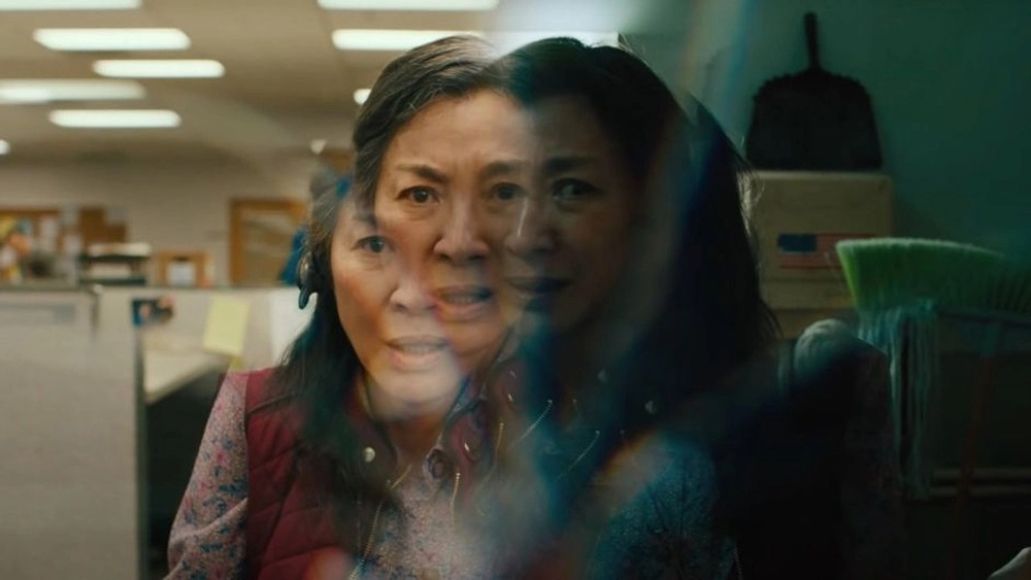 Everything Everywhere All at Once (A24)

For those who haven’t yet experienced the movie, Everything Everywhere All at Once is exactly what the title implies — it’s a lot. But somehow, this sci-fi story about the decisions we could have made and the people we could have become in other timelines, complete with hot dog hands and “talking” rocks, feels deeply human. The film features a stunning lead performance by Michelle Yeoh as Evelyn Wang and phenomenal supporting work from Stephanie Hsu (her daughter, Joy) and Ke Huy Quan (Weymond, the kindhearted husband). There are easter eggs for film buffs, pop culture references, mind-boggling visuals, and a thrilling plot.

By the time the credits roll, though, the true takeaway is the story of a family — the tentative steps towards healing a mother and daughter’s fractured relationship; a marriage that has been drifting for decades resetting its course; and a family that, in every universe, will try to choose each other. “Everybody that worked on it believed in it,” according to Scheinert. The passion for the details, from character quirks to the unforgettable costume work by Shirley Kurata, speaks to the truth of Scheinert’s statement.