Jill Scott is heading out on the road for a rescheduled anniversary tour to celebrate her debut album, Who Is Jill Scott? Words and Sounds Vol. 1, and tickets are going up for sale after a nearly three year wait.

“My band and I were so excited three years ago, but that damn COVID shut us down,” Scott shared in a statement announcing the now-23rd anniversary tour. “Now, we outside! Come see me. Come feel again. Relive your favorite moments. Ya’ll ready to settle down and get with this?!? It’s a lot of love here.”

What Is Jill Scott’s Next Tour?

The 23rd anniversary tour for Who Is Jill Scott? will launch in Augusta, Georgia on February 28th. Following stops in Macon, Georgia; Columbia, South Carolina; and Jacksonville, Florida, Scott will headline two hometown shows at The Met in Philadelphia on March 16th and 18th. She’ll play Brooklyn’s Kings Theatre on March 23rd; Newark, New Jersey on March 27th; and Boston on March 29th before heading to the Midwest for performances in Detroit and Cleveland.

She’ll appear three times in Tennessee between Nashville, Memphis, and Chattanooga to close out April, then opens the next month in Savannah, Georgia. After shows in Greensboro, North Carolina and Atlanta, Scott will perform in Washington, DC over two nights between May 11th and 14th. The anniversary tour wraps at Los Angeles’ Hollywood Bowl on June 22nd.

Who Is Opening for Jill Scott on Tour?

No openers have been announced for Jill Scott’s anniversary tour at this time. Perhaps Scott could enlist her Verzuz battle partner Erykah Badu for another team-up?

See Jill Scott’s upcoming tour dates below, and get tickets to all of her upcoming concerts here. 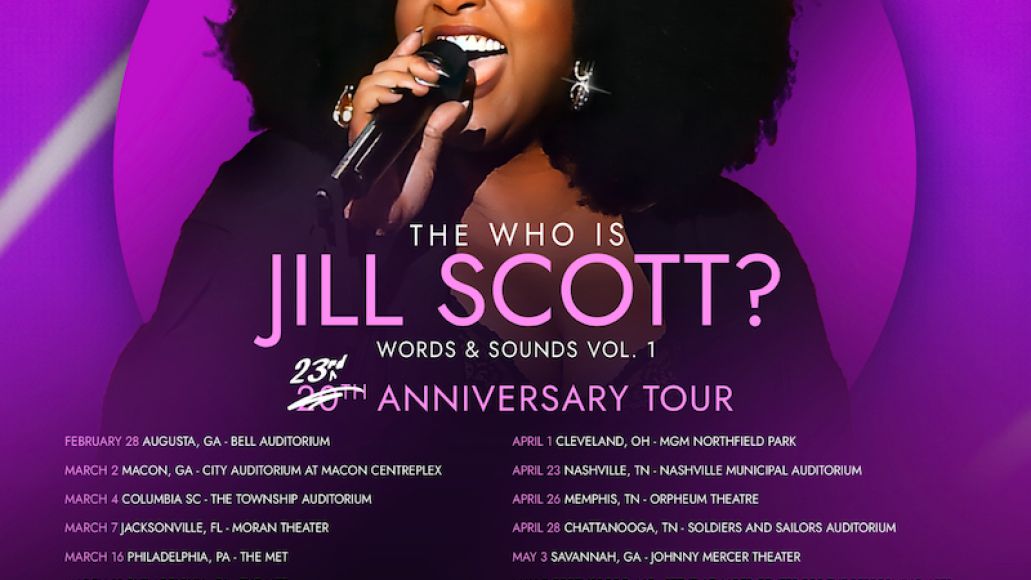