Well, yesterday was fun. On Tuesday, January 10th, three major US festivals released their respective 2023 lineups: Boston Calling, Bonnaroo, and Coachella. As usual, Coachella’s deeply curated lineup is sure to be the marquee American festival in 2023 — but, perhaps unsurprisingly, it’s one of the most non-American lineups in recent memory.

Coachella 2023 will be headlined by Bad Bunny, BLACKPINK, and Frank Ocean (!), with Calvin Harris appearing in the new “Returning to the Desert” slot and Gorillaz, Rosalía, and Björk filling in as subheadliners. Of those seven, only one is native to the Unites States — and that’s Frank Ocean, who hasn’t performed since 2017 and is set to be making a significant return this year.

Originally appearing on the 2020 lineup (which was cancelled due to the pandemic), Frank Ocean was heavily rumored to reprise his headlining slot for last year’s lineup, but deferred to 2023 after grieving the death of his brother in 2020.

With one headliner essentially confirmed by Coachella organizer Paul Tollett via an LA Times article last year, all bets were on for the other two names. Bad Bunny emerged as a “no-brainer” choice, especially given his gargantuan streaming numbers, sold out stadium tour, and growing icon status. BLACKPINK, on the other hand, are coming off the release of 2022’s Born Pink, which became the first album by a K-Pop group to top the Billboard 200.

But numbers aside, both Bad Bunny and BLACKPINK topping the bill is a testament to Coachella’s mission of global allure; over the last five years, Coachella has been adamant about booking international artists that bring a wider range of fans and celebrate their culture with style and substance. Having two out of the three headliners for the biggest festival in North America be non-native English speakers, with wildly different aesthetics and cultural backdrops, is a major success on Coachella’s part, and it reflects our modern community of music lovers: global, distinct, and genreless.

The global allure is just one part of Coachella’s whirlwind lineup, with plenty of surprises wedged into the second lines and undercard. The trio of Phoebe Bridgers, Lucy Dacus, and Julien Baker will unite for a special boygenius performance, electronic legends The Chemical Brothers and Underworld appear on the bill, and enigmatic songwriter and producer Jai Paul is set to make a major return.

Ahead of Coachella 2023, we’re breaking down this year’s artists line by line. Plus, check out the full lineup below. 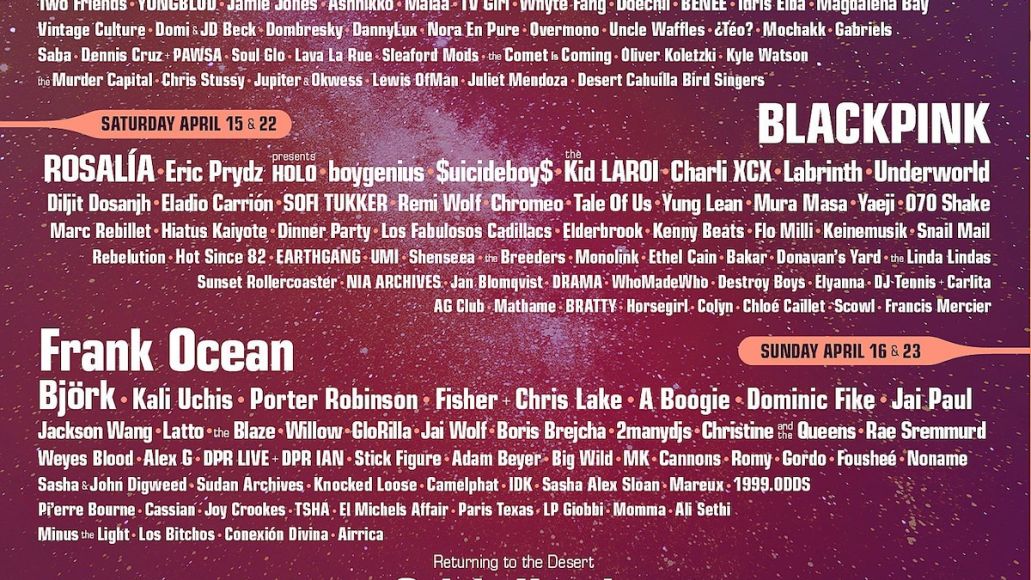