Coachella is set to return to Indio, California in 2023, taking over two weekends at the Empire Polo Club from April 14th-16th and April 21st-23rd. Learn more about the festival below, and scroll on to buy tickets (even though the event is sold out). You can also stay up to date on the latest Coachella news and rumors by visiting our Coachella Live page.

Paul Tollett and Rick Van Santen co-founded the Coachella Valley Music and Arts Festival in 1999. Organized by Goldenvoice, a subsidiary of AEG Presents, the two-weekend, multi-stage event features musical artists from a range of genres, including rock, pop, hip-hop, and electronica, as well as art installations and sculptures.

Who Is Headlining Coachella in 2023?

This year’s trio of headlines is especially historic, as Bad Bunny and BLACKPINK will break barriers as the first Latin and Korean acts to ever headline Coachella. Meanwhile, Frank Ocean will make his long-awaited return to the stage for the first confirmed live performance in six years.

Who Else Is Playing at Coachella in 2023?

Beyond the headliners, Coachella’s 2023 lineup boasts a potent and diverse undercard led by two acts who topped the bill in years past: Gorillaz and Björk. Other noteworthy artists include Rosalía, The Chemical Brothers, Blondie, Pusha T, Charli XCX, Underworld, Wet Leg, and Weyes Blood.

How Can I Get Tickets to Coachella 2023?

Tickets to Coachella 2023 went on Friday, January 13th at 11:00 a.m. PT. and quickly sold out. However, fans can still get their hands on GA and VIP passes via Stubhub — where your order is 100% guaranteed through Stubhub’s FanProtect program. 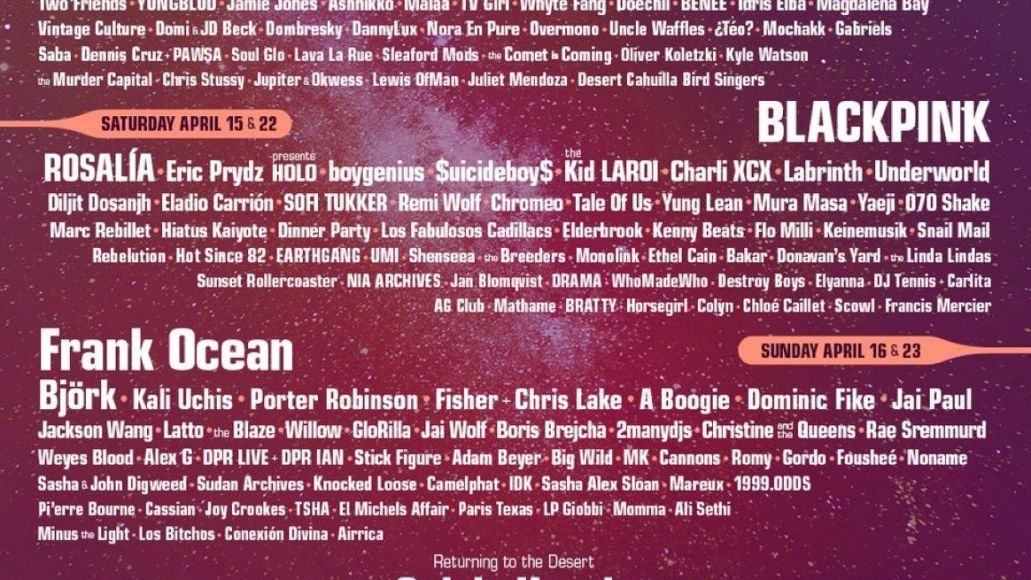 How to Get Tickets to Dave Matthews Band's 2023 Tour

How to Get Tickets to Beck and Phoenix's 2023 Tour

How to Get Tickets to Nickelback's 2023 Tour

How to Get Tickets to Pantera's 2023 Tour